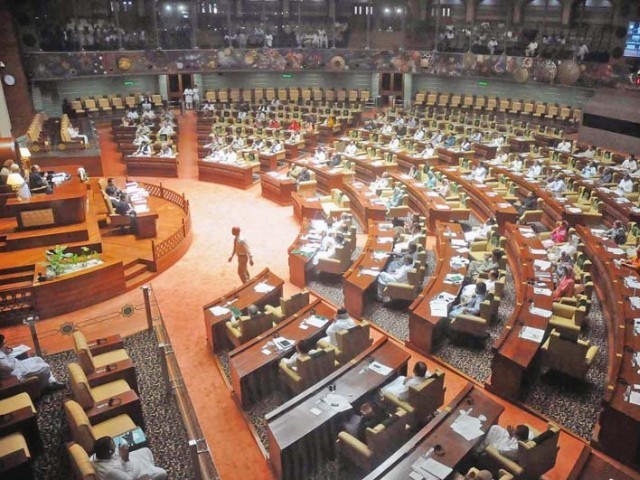 KARACHI: In continuation of the Sindh Assembly session on Monday, opposition and treasury members engaged in a prolonged verbal duel on Tuesday. As a consequence, any voice of reason drowned amid the ensuing deafening cacophony, the assembly’s agenda remained unattended and the members, instead, debated over who had used the word “dog” as an insult during Monday’s proceedings.

The session, falling on a private members’ day, commenced in the midst of the ruckus, as the assembly hall resounded with shouts of unparliamentary language and insulting slogans, including ‘Aik takay ke do Niazi, go Niazi, go Niazi [Two Niazis for a taka, go Niazi, go Niazi] and “Go Zardari go.” Meanwhile, MPAs, who were supposed to take up bills and resolutions, levelled accusations against each other.

In an attempt to restore order, Sindh Assembly Speaker Agha Siraj Durrani asked the members not to violate the decorum of the assembly and refrain from using abusive and derogatory language. He also referred to the commotion witnessed by the assembly on Monday when lawmakers used abusive language as a debate ensued over dog-bite cases in the province.

“Yesterday, some members breached the privilege of this august house,” he said. “Some members made videos [of the session] and shared them on social media,” the speaker said, condemning the act. “You have the right to protest but you cannot use abusive language. This is the assembly, not a public event or a jalsa,” he added. Durrani warned that he would have to ban the use of mobile phones inside the assembly if lawmakers continue to record the sessions and post videos on social media.

Particularly addressing the opposition members, Durrani said, “I ignore [the misconduct] when you disrespect me but please respect this house and follow its rules.”

However, Durrani’s words and requests seemed to have little effect, if any, as the MPAs continued with their tirade.

“They used abusive language against the members of the treasury,” he said, adding that “everyone has the right to speak but they should not cross the limit. They called us dogs.” He said that use of such derogatory language will not be tolerated and demanded that the opposition leader tender an apology on the floor of the house.

In rebuttal, Arsalan Taj of Pakistan Tehreek-e-Insaf said that members from both sides had used derogatory language.

Chawla, however, refuted his claim and requested the speaker to check the video recording from the previous day and form a committee to probe the matter. “No one from the treasury benches used such a word,” he claimed and warned that they would move a privilege motion in case the opposition leader fails to tender an apology.

In response, Taj claimed that Sharjeel Memon had made use of derogatory language.

He accused Memon, while addressing the opposition members, of saying, “Why are you biting us? Is it not wrong?”

At this, Chawla denied the allegation and again asked the speaker to check the recording from the previous day and investigate the matter. He also stressed that the opposition leader apologise to the treasury members or else, they will “be forced to move a motion against the opposition.” Other Pakistan Peoples Party MPAs supported Chawla’s demands.

Thereafter, when it was his turn to speak, Opposition Leader Firdous Shamim Naqvi, instead asked Sindh Chief Minister (CM) Syed Murad Ali Shah to apologise for his failure to deal with the problem of dog bites.

“The CM should apologise to the people of Sindh over his failure to resolve the issue of dog bites,” he said, claiming that over 180,000 people in the province have been attacked by dogs in the province and many of them have died. This irked PPP lawmakers who protested over the opposition leader’s remarks. However, Naqvi continued with his speech, even after his microphone was turned off.

Later, Chawla demanded that instead of the CM apologising, Prime Minister (PM) Imran Khan must resign as he has “ruined the country’s economy.”

“If you can talk against the CM, then I too can criticise the PM,” he said.

At this, opposition and treasury members again created pandemonium in the house, as Chawla continued to demand that the opposition apologise. Though, Naqvi disregarded his demands and said, “Why should I apologise when I didn’t use the word dog?” He asked Chawla to check the recording of the previous day’s proceedings and prove the allegation levelled against him.

The speaker, however, remarked that there is no harm in apologising. Nevertheless, nobody seemed to have listened to him amid the ensuing uproar and he was compelled to adjourn the session till Friday.