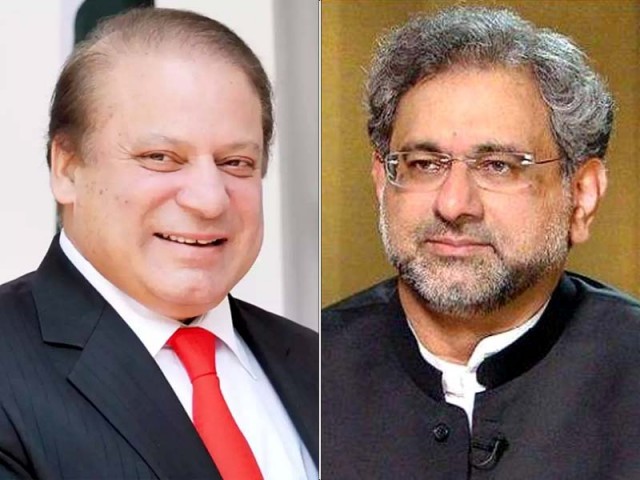 Incarcerated former prime minister Shahid Khaqan Abbasi has said that Pakistan Muslim League-Nawaz (PML-N) supremo Nawaz Sharif, who left for London for medical treatment earlier in the day, will not escape his sentence awarded by an accountability court and return back to the country after his treatment.

“Mian Nawaz Sharif was outside the country [when he was convicted by the accountability court] and had returned to go the prison,” said Abbasi while talking to reporters in a short video shared by the PML-N on its official Twitter handle on Tuesday.

The ex-PM was referring to a time when Nawaz along with his daughter Maryam Nawaz in July last year was sentenced in Avenfield reference for 10 years while he was in London attending his ailing wife Kulsoom Nawaz.

Nawaz, the three-time former premier, departed for the UK’s capital via an air ambulance after the Lahore High Court (LHC) granted him a four-week permission to seek medical treatment, rejecting the federal government’s condition of furnishing indemnity bonds as a guarantee of his return.

“Nawaz Sharif is not like them…and he will go to the jail after receiving medical treatment which is his right,” Abbasi added.

Setting aside the claims that the Tehreek-e-Insaf (PTI) government had provided the PML-N supremo a relief, the former premier said: “Ask the people of this country, is this the way to provide a relief.”

On the Monday’s cabinet reshuffle which also witnessed induction of PTI senior leader and former finance minister Asad Umar as planning and new initiative minister, Abbasi said: “It [government] is a group of incompetents… the cabinet shake-up will not make a difference.”

Currently, under the National Accountability Bureau’s custody, he is being investigated for allegedly awarding a 15-year contract for a Liquefied Natural Gas (LNG) terminal to a Qatari company in violation of rules and of causing losses to the national exchequer as the petroleum minister during the last government of PML-N.