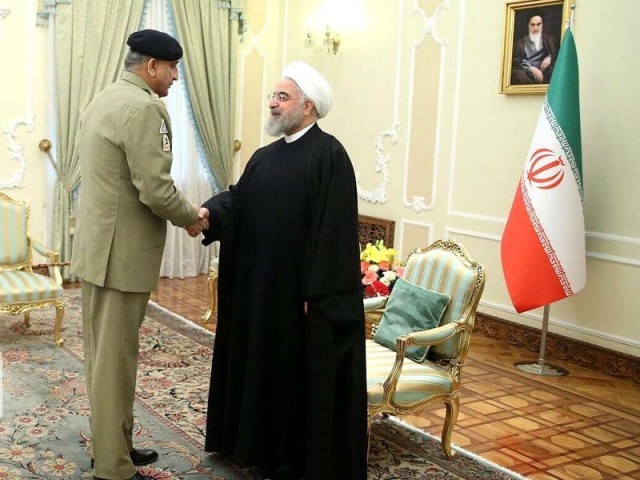 Rouhani’s statement came during meeting with Army Chief General Qamar Javed Bajwa, who was on a two-day visit to Iran as part of ongoing high level exchanges between the two neighbours.

This was the second visit of General Bajwa to Tehran and came against the backdrop of efforts by Pakistan to defuse tensions between Iran and Saudi Arabia.

The significance of the visit can be judged from the fact that the army chief had wide ranging meetings in Tehran. He not only held talks with Iranian military commanders but also met the Iranian president, foreign minister and the national security adviser.

The agenda of his engagements was broad-based covering bilateral ties, regional security situation as well as ongoing efforts to seek a political way out of the tensions in the Persian Gulf region.

Pakistan has been making efforts to facilitate direct talks between Iran and Saudi Arabia since tensions between the two countries deepened after missile attacks on the Saudi oil facilities in September.

Prime Minister Imran Khan along with the ISI chief also visited Iran in October. Foreign Minister Shah Mahmood Qureshi, who accompanied the prime minister, had said at the time that Pakistan’s efforts had helped prevented escalation in tensions in the Middle East.

The visit of General Bajwa was a follow-up to those high level visits. A statement issued by the Inter-Services Public Relations (ISPR) said the Army Chief and the Iranian President discussed “regional security environment and matters of mutual interests”.

The military’s media wing added that the Iranian president appreciated the role of Pakistan towards regional peace and successes of the Pakistan Army against terrorism.

Iran’s state-run news agency quoted President Rouhani as saying that “good and friendly ties with Pakistan are valuable assets that can help strengthen bilateral relations”. He added: “Iran and Pakistan shouldn’t be OK with their current bilateral annual trade volume. The two should do more to increase their mutual trade.”

President Rouhani said that Tehran was ready to finish the work on a gas pipeline that had been laid until the Pakistani border, adding that Iran can help bring Iranian and Pakistani business communities closer.

The army chief mentioned that Pakistan was prepared to strengthen bilateral relations, adding that there were good meetings between Iranian and Pakistani officials to further secure their borders.

During meeting with Iranian Foreign Minister Javad Zarif, the army chief reviewed the avenues regarding strengthening bilateral relations in the political, economic, and military areas.

General Bajwa also met with the Secretary of the Supreme National Security Council, Ali Shamkhani, during which the Iranian senior official said that Iran was willing to strengthen relations and cooperation with the regional countries, especially the neighbours.