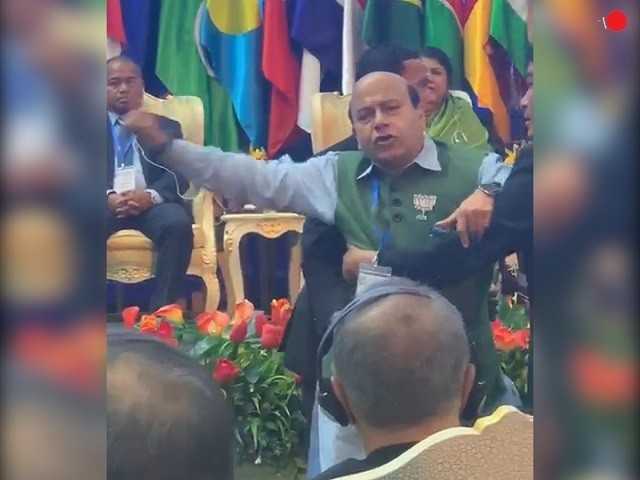 An Indian politician, Vijay Jolly, was removed by security officials at the second Asia Pacific Summit emerged on Tuesday after he rudely interrupted an address by National Assembly Deputy Speaker Qasim Sure.

Suri was raising the plight of Kashmiris in his address, when the Indian politician got up and interrupted him.

In the video, Jolly can be seen gesturing to Suri and saying: “I voice my protest…Jammu and Kashmir is not a part of this summit…How can he say this. This is wrong, he cannot say this is a human rights violation”.

#India once again faces embarrassment at the international level, While Deputy Speaker of the @NAofPakistan @QasimKhanSuri was touching on #kashmir conflict, an #India diplomat tried to interrupt during the 2nd #ASIAPACIFIC SUMMIT, Security pushed out #Cambodia @AamirLiaquat pic.twitter.com/HT9IW0yT1K

A voice in the crowd replies to him saying, “No let him speak”.

Jolly was then forcibly removed by security from the event.

The video soon began doing the rounds on Twitter with users lambasting the Indian official over trying to prevent Suri from raising the Kashmir issue at the summit.

Over 860 delegates from 40 countries attended the second edition of the intercontinental summit.

Disgraceful. Maj Gen(R) SP Sinha a leader of BJP advocates rape of Kashmiri women on TV. Imagine the fate of women in Indian Occupied Kashmir where such men wield power with total impunity. Indian forces have used rape as a tool according to HRW report https://t.co/tfKDIjWLib https://t.co/7NBCJ9WvB1