The ranger had skin ripped from his hands and legs in the ordeal
By AFP
Published: November 16, 2019
Tweet Email 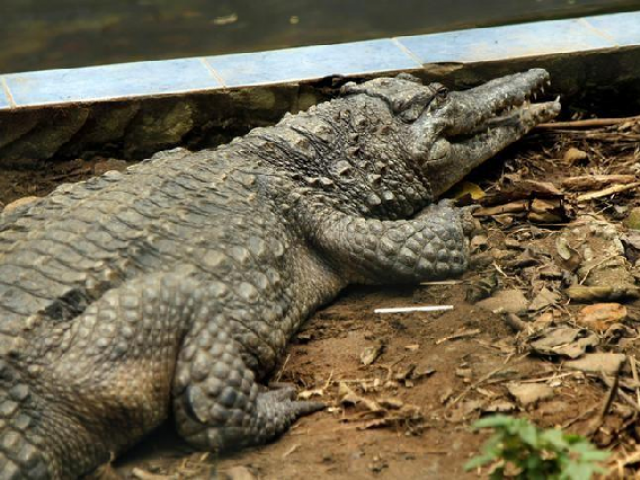 CAIRNS: An Australian wildlife ranger has recounted his terrifying escape from the clutches of a “particularly cunning” crocodile, after wrestling with the reptile and sticking a finger in its eye.

Craig Dickmann, who made a split-second decision to go fishing last Sunday in a remote part of Northern Australia known as “croc country”, said a 2.8-metre (nine-foot) crocodile came up from behind him as he was leaving the beach.

“As I’ve turned to go, the first thing I see is its head just come at me,” he told reporters on Friday from his hospital bed in the town of Cairns in Queensland state.

Dickmann said the animal latched on to his thigh.

“That noise will haunt me forever I think, the sound of the snap of its jaws,” he said.

The 54-year-old said he wrestled with the croc on the remote beach as it tried to drag him into the water.

Dickmann stuck his thumb into its eye, saying it was the only “soft spot” he found on the “bullet-proof” animal.

“Their eyes retract a fair way and when you go down far enough you can feel bone so I pushed as far as I possibly could and then it let go at that point,” Dickmann said.

After a few minutes, he said he managed to get on top of the croc and pin its jaws shut.

“And then, I think both the croc and I had a moment where we’re going, ‘well, what do we do now?'”

Dickmann said he then pushed the croc away from him and it slid back into the water.

The ranger had skin ripped from his hands and legs in the ordeal and drove more than 45 minutes back to his home before calling emergency services.

It was then another hour in the car to meet the Royal Flying Doctors Service who flew him to Cairns Hospital, where he is recovering from the ordeal.

Queensland’s department of environment this week euthanized the animal.

“The area is known croc country and people in the area are reminded to always be crocwise,” the department said in a statement.

Saltwater crocodiles, which can grow up to seven metres long and weigh more than a tonne, are common in the vast continent’s tropical north.

Their numbers have exploded since they were declared a protected species in the 1970s, with attacks on humans rare.

According to the state government, the last non-fatal attack was in January 2018 in the Torres Strait while the last death was in October 2017 in Port Douglas.