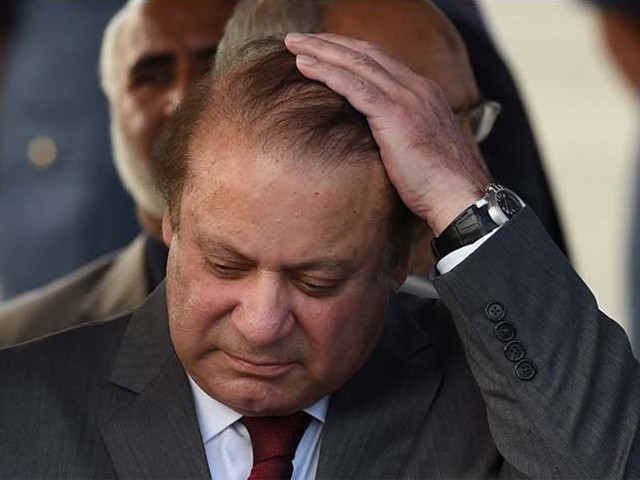 'Nawaz’s blood sugar level had dropped while there was swelling on parts of his body due to high doses of steroids.': PHOTO: FILE

PML-N spokesperson Marriyum Aurangzeb said Nawaz has been prepared for his departure from the beginning of this week.

The spokesperson said, “National Institute of Blood Diseases and Bone Marrow Transplantation Head Dr Tahir Sultan Shamsi, who had earlier co-opted with the board of doctors constituted by the government, was flown to Lahore to check Nawaz on Friday.”

She said Nawaz’s blood sugar level had dropped while there was swelling on parts of his body due to high doses of steroids, adding that Nawaz was given special medicine to create an artificial increase in his platelet count so that he could safely fly to London, after the party expected to secure permission from the government in view of his deteriorating health.

“However, the delay in granting a condition-free permission has created complications for the former prime minister, which is further endangering his life,” said Aurangzeb.

She was earlier quoted as saying by the media that Dr Shamsi instructed to repeat all his medical tests.

“Shamsi will again conduct a check-up of Nawaz and examine his reports on Saturday,” she said. “Nawaz’s drugs are being readjusted. According to the doctors, there is no roam for any further delay and every passing minute without proper treatment is proving dangerous for him.”

According to another PML-N leader, Nawaz was being prepared medically to fly to London.

The source said that given his age and condition, Nawaz required being prepared in advance.

“Preparations have again begun anticipating a favourable decision from the court,” said the source. “If the decision comes in our favour, an air ambulance will be booked within no time after completion of all legal formalities.”

Nawaz was highly unlikely to travel on a commercial flight given his condition, the sources said, adding that Hussain Nawaz was looking after the travel arrangement from London.

Further, former premier’s personal physician Dr Adnan Khan responded to speculations surrounding Nawaz’s decision to be shifted back to Jati Umra, tweeting that those heartlessly targeting former PM Nawaz for not staying at a hospital should know that “he is on heavy doses of steroids and massive immunomodulation”.

He said it was not advisable for him to stay at a hospital also as he was prone to infections, which could prove fatal, due to his medical condition.

He said doctors recommended keeping Nawaz in isolation at an HDU facility.  “Sharif Medical City manages one such facility at his home where it provides what’s necessary. Round-the-clock specialised doctors and nurses are providing health care which is being supervised by a medical board,” said Dr Adnan.