Turkey says it will also send some detain­ed milita­nts to German­y, Irelan­d, Denmar­k and France in the coming days
By Reuters
Published: November 14, 2019
Tweet Email 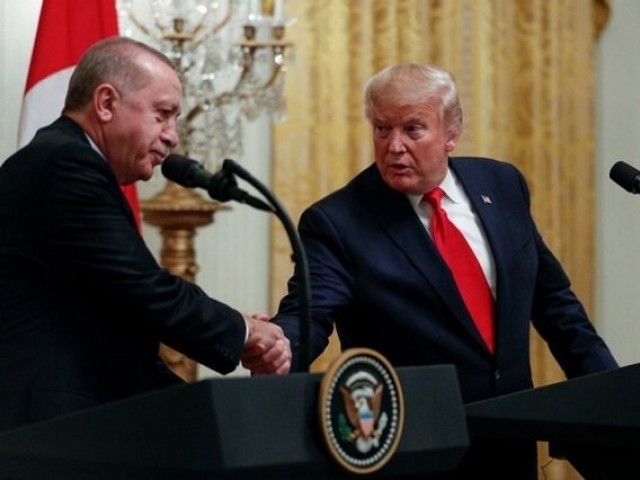 ANKARA: Turkey said on Thursday it would deport an American Islamic State (IS), also known as Da’ish, fighter to the United States after he was refused entry to Greece, leaving him stuck in a border buffer zone for days, and added that eight other Europeans would be sent home.

Turkish authorities said on Monday they had begun to send IS detainees back to their home countries, deporting a German and an American.

A further 23 European nationals would be sent home in the coming days. Greek police said on Monday Turkish police had come to the Kastanies border post and requested that a US citizen of Arab descent accompanying them be let into Greece, as he had been arrested for exceeding his maximum permitted stay in Turkey.

The man was refused entry and returned to Turkey, Greek police said. However, Turkish state media said the man had remained in a buffer zone between Turkey and Greece.

On Thursday, the Interior Ministry said the United States had agreed to take back the fighter, who had requested deportation to Greece prior to being denied entry.

“Upon guarantees that he will be taken back by the United States and that travel documents will be procured, the necessary proceedings have been started to send him to the United States,” the ministry said in a statement.

Separately the ministry said Turkey was also deporting one British and seven German fighters back to London and Berlin respectively on Thursday.

Ankara had announced on Monday that the seven German nationals would be deported this week.

Turkey has said that relevant countries were being notified. Germany’s foreign ministry said on Monday that Ankara had informed Berlin of 10 people – three men, five women and two children.

Turkey, which has suffered multiple deadly attacks by IS militants, says it has captured 287 fighters in northeast Syria since launching a cross-border incursion on October 9 targeting the Kurdish YPG militia.

Ankara says it is has hundreds more militants in detention, and has accused European countries of being loath to take back citizens who traveled to join Islamist militants fighting in Middle East wars, mainly in Syria and Iraq.

European Nato allies of Turkey have been worried that IS militants could escape Kurdish prisons in northern Syria as a result of the offensive.

Ankara has dismissed the concerns. Thousands of militants were jailed in YPG-controlled territory after the collapse of the IS “caliphate” in 2017, and tens of thousands of their relatives are kept in camps there.

Ankara views the YPG, the main component of the US backed Syrian Democratic Forces (SDF), as a terrorist group that backs a Kurdish insurgency on Turkish soil.

Turkey’s move to deport the American IS fighter came a day after President Tayyip Erdogan held talks with US President Donald Trump in Washington to overcome mounting differences between the Nato allies.

Erdogan said he told Trump that Turkey expected the United States to halt its support for the YPG.

Turkey has said it will also send some detained militants to Germany, Ireland, Denmark and France in the coming days.