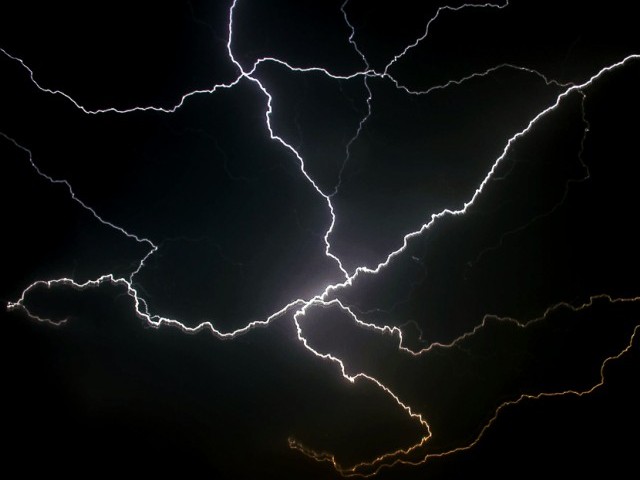 Dozens of animals have also been killed in the region. PHOTO: FILE

KARACHI: At least 22 persons, including women and children have reportedly been killed due to lightning in parts of Tharparkar and Sanghar districts. Dozens of animals have also been killed in the region during last 24 hours. The heavy to moderate rainfall continues across the desert, creating panic amongst the people of Tharparkar and adjacent areas.

Hospital sources said that several people with injuries have also been shifted in different hospitals, including the district Civil Hospital Mithi.

The district administration on Thursday evening issued a notification of emergency across the district, cancelling leaves of employees of all departments.

Health officials confirmed that at least 10 bodies were brought to different hospitals. They said that 16 injured were also transported to health facilities since Wednesday late evening.

According to health department, four persons were killed in Khipro taluka of Sanghar district. Those who died by lightning strikes were identified as Singhari wife of Sher Khan, Marfi wife of Fhoto, Zulekha wife of Maula Bux and Fhogo son of Muala Bux.

In village Udani near Chhachhro town, a woman Sona Dohat, 35, was killed. In another incident, three persons of a family identified as Abdul Razzaq, Muqima and Sakina residents of village Morasiyo near Chhaccharo town were killed. Samad Soomro and Jamal Shoro of Diplo and Nagarparkar taluks were reportedly killed by the lightning strikes.

Karamat Nohrio, 40, of village Ketari near Islamkot and Jamoo Kolhi, 30, of village Dabhi near Mithi were reportedly killed on the spot with the lightning strikes.

In separate incidents, 25-year-old Tayyab Arisar was killed in Mithyaro village near Islamkot and Ambun Kolhi, 20, killed near Mithi city. Sukhan Soomro, 20, and Mushtaq Soomro died in a village Chhachhi near Islamkot.

Over two dozens injured with lightning strikes were transported to hospitals of Mithi, Islamkot and Chhachhro hospitals.

A resident of Mithi city, Mumtaz Nohrio, said that electricity was suspended to cities while majority of people believed that it was too dangerous to use mobile phones during the heavy rains. “That’s why we don’t know exactly what is happening in remote areas,” he justified, saying there was no rescue system so the injured could immediately shifted to hospitals.