Says govt must not go blind with its politi­cs of reveng­e and should allow Nawaz to leave the countr­y for treatm­ent
By Our Correspondent
Published: November 14, 2019
Tweet Email 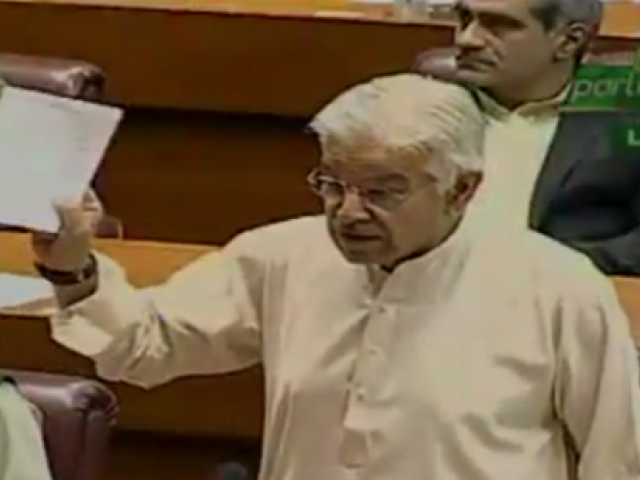 ISLAMABAD: Senior Pakistan Muslim League-Nawaz (PML-N) leader Khawaja Asif said on Thursday that an indemnity bond to the tune of Rs7-7.5 billion was nothing but the government must not go blind with its politics of revenge and should allow Nawaz Sharif to go abroad for treatment.

Speaking on the floor of the National Assembly, Asif warned the government once again that if anything happened to the PML-N supremo, Islamabad would be held responsible.

The government and the Sharif family on November 13 had failed to break a deadlock over the removal of former Nawaz’s name from the no-fly list as the former refused to relent on its conditions triggering an angry snub from the PML-N.

Islamabad decided to grant the Sharif family patriarch “one-time” permission to travel abroad for medical treatment for four weeks provided he submits an indemnity bond to the tune of Rs7-7.5 billion. However, the PML-N was quick to reject the government’s terms, describing the decision “discriminatory” and “based on political vindictiveness”.

Criticising Law and Justice Minister Dr Farogh Naseem, who was also the head of the cabinet’s sub-committee tasked to decide Nawaz ECL matter, advised him to “talk about principles instead of talking as per the weather.”

“Farogh Naseem should have given the same arguments in Nawaz’s case as he gave at the time of [former president Pervez] Musharraf.”

“The surety of Rs7 billion is nothing but the government’s demand is making the political process unclean. Politics has become a curse these days,” he added.

Asif continued his address and added, “We all contest elections against our opponents but we do not become personal enemies. If anything happens to Nawaz Sharif, then the government will be held responsible.”

“Nawaz Sharif came back even before the last elections, leaving his ailing wife behind knowing that he will be arrested along with his daughter once they land in Pakistan.”

Giving details of Nawaz’s health, Asif said, “Nawaz is suffering from five to six diseases. I am sure he will return to Pakistan again after his treatment abroad.”