The strong perfor­mance appear­s to establ­ish Disney as a leadin­g player in the stream­ing wars
By Reuters
Published: November 14, 2019
Tweet Email 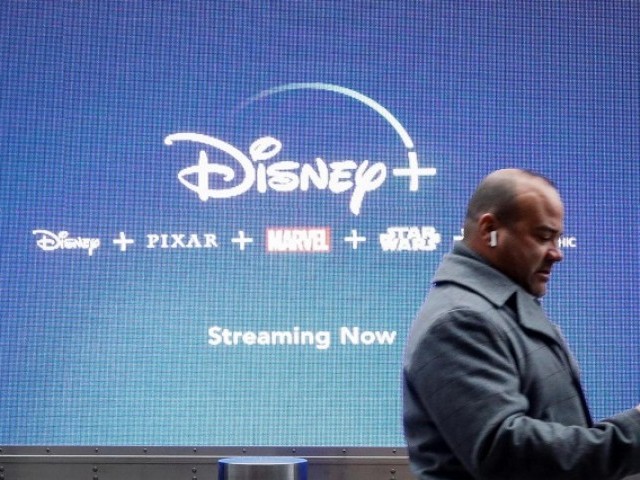 A man looks at his phone as he passes by a screen advertising Walt Disney's streaming service Disney+ in New York City, US, November 12, 2019. PHOTO: REUTERS

Walt Disney shares soared to a record high after the entertainment firm said its new streaming service, Disney+, had been met with “extraordinary consumer demand,” reaching 10 million sign-ups in its first day.

The strong performance, which added $18 billion to its market capitaliSation, appears to establish Disney as a leading player in the streaming wars that pit it against industry leader Netflix, Amazon.com’s Prime Video service, Apple’s Apple TV+ and AT&T’s forthcoming HBO Max service.

Combined with Disney’s other streaming businesses – Hulu, which has 26.8 million subscribers, and ESPN+, which serves 3.5 million subscribers – the company now serves 40.3 million viewers in the United States, compared to about 60 million for Netflix.

Disney shares rose 7.5% to $149 in late-day trading on the New York Stock Exchange.

Disney+, which launched in the United States, Canada and the Netherlands on Tuesday, was hit with technical glitches that the company said were caused by higher-than-expected demand.

The service costs $7 per month and features roughly 500 movies and 7,500 TV episodes from the company’s deep family entertainment catalogue, as well as new programming. A bundle including ESPN+ and Hulu costs $13.

In April, Disney said it plans to reach 60 million to 90 million Disney+ subscribers globally by 2024.

In a note on Wednesday, Wedbush analyst Daniel Ives wrote that at its current pace, Disney could hit that subscriber goal potentially two years earlier.

Netflix says it will not join Apple TV service

Although Disney’s day-one numbers were more than three times the size of some forecasts, it was not immediately clear how many of these new customers were from free promotions.

In October, Disney and telecom provider Verizon Communications announced a promotion that made all new and existing Verizon unlimited wireless customers, as well as new Fios and 5G home internet customers, eligible for a free, one-year subscription to Disney+.

Ahead of the launch, Disney executives said they expected between 17 million to 19 million new subscribers as a result of the Verizon promotion. Verizon told Reuters in October it expected even more of its customers to have access to the deal.

Disney said it had no future plans to release Disney+ subscriber data outside of the company’s quarterly earnings calls.