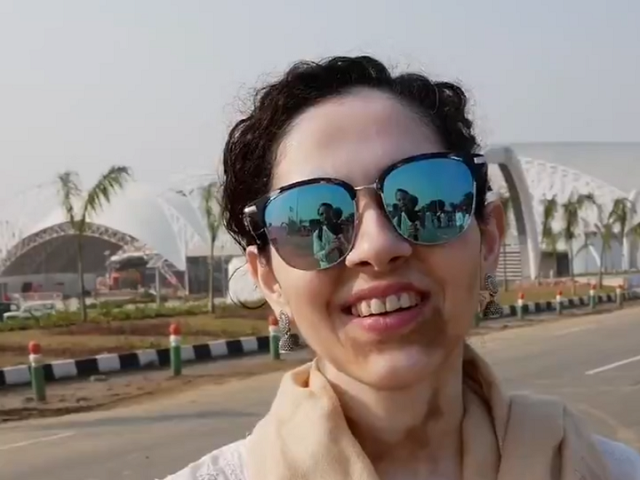 Indian video blogger Manisha has heaped praise on Pakistan after her visit to the Kartarpur Corridor and called on the public to “use their own mind when it comes to Pakistan”.

Although she had to cross the border without her Kiwi husband Karl Rock, who is a renowned YouTuber with more than 80 million subscribers, she made a visually delightful piece accompanied by earnest commentary.

“Pakistani people are really really nice… Don’t listen to what the Indian media or politicians say.”

Manisha began shooting after reaching the revered site of the Sikh faith.

She also briefed the Sikh Yatrees coming to the site from India of the procedure of entering the country.

Speaking on the 20 dollars charged by the Pakistani government, she expressed her satisfaction saying, “The government has taken the move to make things easy for Sikhs and New Delhi must not criticise it.”

“It feels so good to be here but I feel sad that I have to leave now…after visiting Kartarpur I need to go to other cities of Pakistan such as Karachi, Lahore and Islamabad,” she added.

In a landmark peace move Islamabad opened the Kartarpur Corridor on November 6.

Followers of Guru Nanak are now allowing to visit the revered Sikh Guru’s final resting place without a visa.

The 3-kilometer corridor provides visa-free access to Sikh pilgrims, allowing them to travel to Gurudwara Darbar Sahib in Kartarpur, where Guru Nanak, the founder of Sikhism, spent the final years of his life. The passage links Narowal district to Dera Baba Nanak in Gurdaspur in Punjab, India.

The project, touted by many as the ‘corridor of peace’ between the two arch-rivals, was completed in a record period of eleven months by Islamabad.