Some users on social media say act was a form of harass­ment while others say it was funny
By News Desk
Published: November 13, 2019
Tweet Email 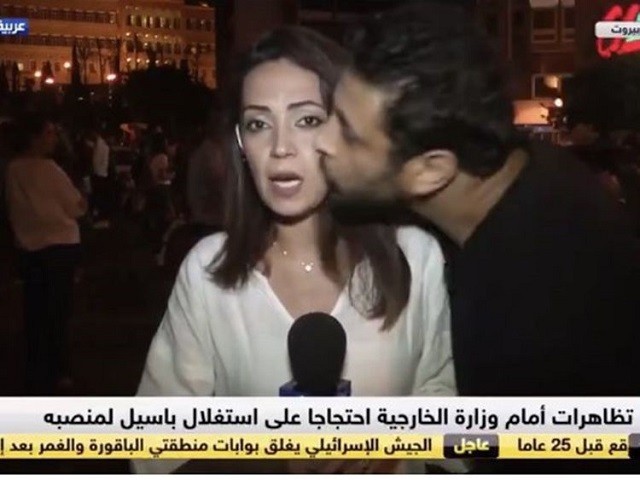 Some users on social media say act was a form of harassment while others say it was funny. PHOTO COURTESY: GULF NEWS

A video of a Lebanese protester kissing Sky News Arabia’s anchor while she was live on air went viral stirring a social media debate.

Lebanese popular anchor Darine El Helwe was on live broadcast from Riad Soloh Square in the capital Beirut when a male protester kissed her on her cheek, according to Gulf News.

In the video, El Helwe was taken aback by the kiss and froze for a few seconds before laughing nervously to recollect herself and resume reporting.

The shared footage triggered a debate online between social media users, activists and journalists, who were divided on the incident.

Some considered it cute and funny while others said it was inappropriate and a form of harassment.

Human rights activist Georges Azzi retweeted Neshan’s tweet but said there was nothing funny about the kiss.

Lebanese have been protesting since October 17 demanding an overhaul of the country’s ruling elite widely considered as corrupt.

While the protesters have somber and serious demands, it hasn’t stopped many from enjoying their time whilst demonstrating.

Many protesters have taken selfies and videos with television reporters widely considered to be heroes of the uprising.

“I was live when I felt the kiss, without seeing him. I tried to continue reporting professionally although my voice was shaky. Despite the unacceptable act, I remained emotionally stable and maintained eye contact with the camera,” she said.

However, after the kisser publicly apologised on Facebook, El Hewli said she felt less angry about the incident.