Some people who tried to access the servic­e were greete­d by an image of Mickey Mouse on a blue screen­
By Reuters
Published: November 13, 2019
Tweet Email 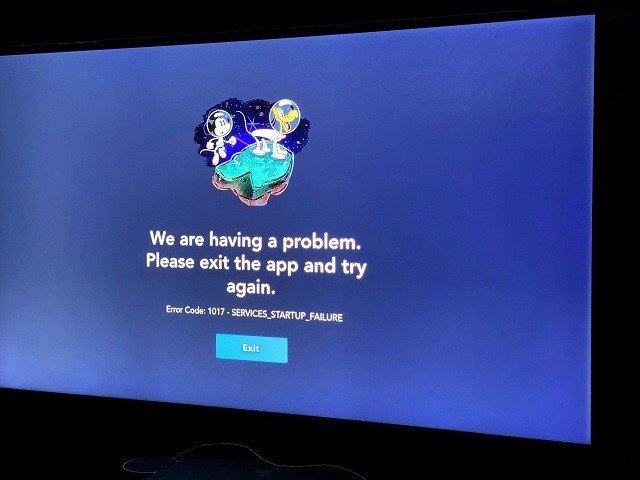 An error message for Disney’s streaming service is seen on a TV in New York, US November 12, 2019. PHOTO: REUTERS

Walt Disney’s long-awaited debut in the streaming media wars on Tuesday was hit with technical glitches that the company said were caused by higher-than-expected demand as it takes on rival Netflix.

It was unclear how many people successfully signed up and how many had difficulty accessing the $7-a-month Disney+, which features roughly 500 movies and 7,500 TV episodes from the company’s deep family entertainment catalog as well as new programming.

But investors appeared to welcome the comment that interest had topped Disney’s forecasts. Disney shares rose about 1.2% to $138.48, while Netflix dropped 1.2% to $290.58 in afternoon trading.

“The consumer demand for Disney+ has exceeded our highest expectations. … we are aware of the current user issues and are working to swiftly resolve them,” Disney said in a statement.

Some people who tried to access the service were greeted by an image of Mickey Mouse on a blue screen, with a message asking them to exit the app and try again. Many others had trouble finding the Disney+ app in Apple’s App Store.

“Not too surprised but @disneyplus looks like it’s already falling over. On FireTV Stick can’t load main page (Unable to connect to Disney+) and couldn’t play ‘The Mandalorian’ (some account issue),” user @pmhesse  tweeted.

Not too surprised but @disneyplus looks like it’s already falling over. On FireTV Stick can’t load main page (Unable to connect to Disney+) and couldn’t play The Mandalorian (some account issue). Hopefully it’s worked out by tomorrow’s treadmill time.

“The Mandalorian,” the latest in the “Star Wars” movie and TV franchise, is an eight-episode live-action series starring “Game of Thrones” actor Pedro Pascal as a helmeted bounty hunter.Many customers signed up with no problem, and viewers were buzzing about “The Mandalorian,” making it a top trending topic on Twitter. Viewers were trying to decipher the meaning of a surprise twist at the end of the first episode. Among reviews on Rotten Tomatoes, 90% of critics gave the episode a positive rating.

Netflix says it will not join Apple TV service

“While it’s easy to focus on the temporary problems, there’s no doubt that this also shows an enormous demand for Disney’s services,” said Clement Thibault, an analyst at financial markets platform Investing.com.

“Big launches often have their hiccups when consumers are fighting to be the first to have a given service.”

Several users were upbeat about programming from the Marvel superhero universe, “Toy Story” creator Pixar Animation, the National Geographic channel and Disney’s celebrated library of classics such as “Cinderella.”

“Today is the perfect day to just stay home all day on my couch in my PJ’s binging all of my favorite Disney movies on #DisneyPlus,” tweeted @JulieDwoskin