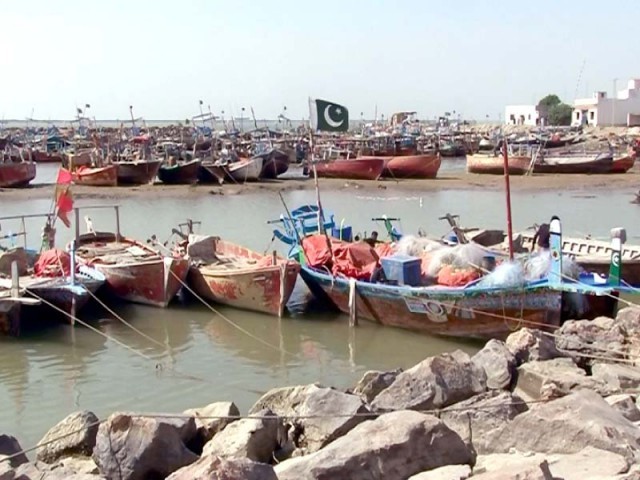 Around 700 boats and launches owned by local fishermen are present at the Dam Jetty built in 2005. The locals lament that larger vessels often sail across the Dam Jetty cleaning the sea of fish. PHOTO: EXPRESS

Located at a distance of 80 kilometres from Lasbela in Balochistan, within close proximity of Sonmiani tehsil, Khari Island rests amid the deep blue sea as an untouched marvel of nature. White birds contrasting against the clear blue sky, crabs scurrying along sandy beaches and whale sharks leaping out of crystal clear water are not uncommon sights on the island, and as locals of adjacent areas claim, the temperature here remains moderate throughout the year.

According to fishermen of nearby localities situated along Balochistan’s coast, Khari has remained unchanged for the past several years- as far back as their memories go. Since time immemorial, it has served as a temporary abode of fishermen who would leave their homes for months-long fishing expeditions.

Fishing for trouble: Sindh govt’s plan for jetties has fisherfolk up in arms

However, these fishing communities located nearby the majestic island present a picture of tragic irony. Sunken in a mire of destitution and dereliction, these stand in stark contrast against the natural opulence of Khari.

One such neglected community constitutes the population of around 6,000 people residing in the surroundings of Dam Jetty in Sonmiani. Most from among the locals in the area work as fishermen, who live in abject poverty and miserable conditions. Challenged by a lack of resources and facilities, survival is tough for them.

Dam Jetty was built in 2005 and presently, boats from among the 700 belonging to the fishermen living in nearby dwellings are moored here before they set out on fishing expeditions. Though, according to Fishermen Cooperative Society Chairman Sardar Kamran Lasi, the jetty has been of little help in allaying the miseries and difficulties of the fishermen.

“It was planned in haste and the construction is flawed,” he said, adding, however, that another one is being constructed though it wouldn’t displace the existing one.

Lasi said that 10 landing sites are being constructed Lasbela, as well as auction halls for the fishermen to sell their catch. He added that demands have also been made to extend the boundaries of the zone where fishing is allowed from 11 nautical miles to 30 nautical miles, in accordance with fishermen’s rights listed under the Deep Sea Fishing Policy.

But fishermen’s problems in the region go way beyond the faulty construction of the jetty and fishing-zone restrictions.

Speaking in this regard, 75-year-old fisherman Muhammad Usman complained about “huge fishing trawlers often sailing across Dam Jetty’s creek and cleaning the sea of fishes,” which are the sole source of income for the fishermen of Sonmiani. “These are not trawlers but an evil that doesn’t even leave behind baby fish,” he said, vexed by the loss of earning opportunities.

Restriction on fishing forces fishermen to live hand to mouth

Lasi pointed towards a similar issue, saying that fishing trawlers at Karachi Fish Harbour operate throughout the year when they have been issued licences for catching shrimps over a period of two months. These trawlers, carrying out fishing activities all year round, in violation of the regulations, results in a significant drop in the number of fish near Balochistan’s coasts.

Moreover, Usman lamented the non-availability of medical facilities to the fishermen in the area. “There is no hospital here to treat the injured, tend to those who survive drowning or heal those afflicted by disease,” he said. To add to it, there is just one dispensary to cater to such a large population, where there is no medical professional but only a compounder, added Usman.

“Consequently, the patients have to be taken to Karachi for treatment and a single trip costs around Rs4,000 to Rs5,000,” he said. “What’s worse is that most of the patients die on the way to the city.”

Of gloom and hope

Usman, and many other fishermen like him, have been living in a quagmire of difficulties and miseries. They have been bewailing their misfortunes for a long time but their complaints seemingly fell on deaf ears hitherto.

Authorities have turned attention to them so far untouched Khari Island, planning to develop into a beach, as the neighbouring fishing communities continue to survive in adversity and distress.

According to Lasi, in the past, little importance was given to the Khari Island, much like the nearby fishing localities, but now it has been planned to develop the island along the lines of Thailand and other famous tourist attractions of the world. “Authorities now plan to equip the island with facilities like camps and washrooms for tourists,” Lasi said.

Also, date palms are to be planted at Khari and speedboats will run from the island to the Sonmiani port, as part of the development plan, he said. Moreover, contracts have been awarded for the construction of a floating jetty and installation of paraphernalia for leisure activities including water sports, jet skiing, paragliding and desert safari, he added.

Lasi expects that the development work will complete by the end of this year, and while the island might turn out to be a prime tourist attraction, the progress of the nearby fishing communities is likely to remain halted and their future bleak, due to the government’s neglect.