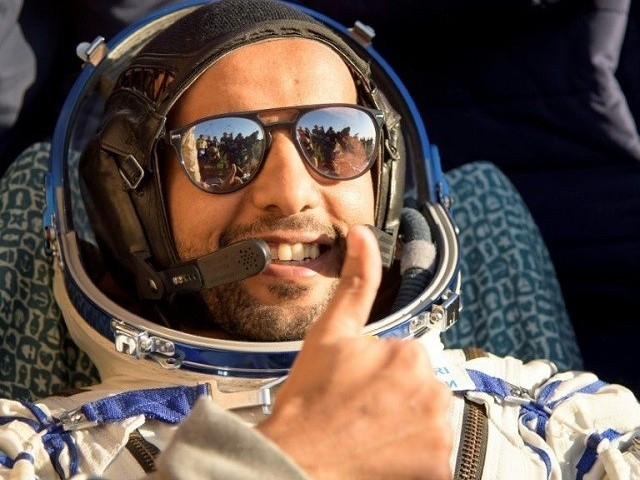 DUBAI: Wearing a blue space suit with a United Arab Emirates (UAE) flag on one sleeve and a spaceship on the other, the first Emirati astronaut said on Tuesday his mission highlighted a crucial issue – climate change.

Witnessing Earth and its beauty from space made him realise the importance of preserving it, said Hazzaa al-Mansoori, a 35-year-old former military pilot, who reached the International Space Station in September.

“We have to appreciate the planet and make sure that we save it for the next generations,” said the father-of-four, urging efforts to address “the reasons behind climate change”.

Mansoori became the first Arab astronaut to visit the ISS and returned home to a hero’s welcome after an eight-day mission, during which he participated in scientific experiments including a time-perception study.

His space trip has become a source of great pride in the UAE, a newcomer with ambitions to send an unmanned probe to orbit Mars by 2021.

In a Dubai hall swarming with journalists, Mansoori recounted the magic of his trip.

“When you see our planet from space… it’s really something amazing and a spectacular view,” he said. “I spent a lot of time looking out that window, I didn’t even want to sleep.”

Mansoori said living in space showed him that life on Earth was “a blessing”.

“It is really difficult to live in space, we have to provide a lot of oxygen, air and food… and we have all of this here for free,” he said.

The five-year period ending 2019 is set to be the hottest ever, said a UN report published in September, scientists’ latest grim reminder that climate change is already a reality.

Last month was the hottest October ever recorded worldwide, according to data released by the European Union’s satellite monitoring service.

“We are lucky to live here — let us protect the Earth and its atmosphere,” said Mansoori.

On board the ISS, Mansoori, who was selected from more than 4,000 UAE candidates, donned Emirati dress and treated crew members to his country’s snacks.

He flew to the station after the UAE signed a contract with Russian space agency Roscosmos to make him a “spaceflight participant”, a term used for people from outside the main space agencies who take short trips to the ISS.

As part of its space plans, the UAE has announced its aim to become the first Arab country to send an unmanned probe to orbit Mars by 2021, naming it “Hope”.