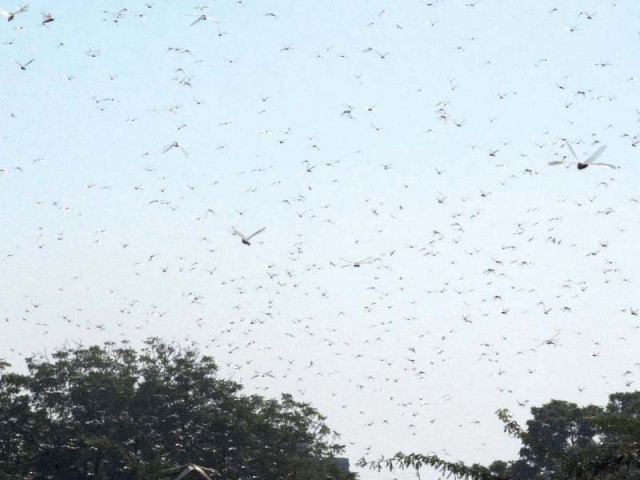 Swarms of locusts took over parts of the city on Monday for the first time in almost 60 years, causing panic among residents given the ill omens locusts have historically been associated with. PHOTO: ONLINE

KARACHI: This year has been a curious one for Karachi and its residents. One can say, as of yesterday, they may have seen everything.

From rains that turned the city upside down to a dengue and malaria epidemic that stubbornly lingers on, Karachiites have suffered much in 2019. If all of that was not enough, swarms of locusts took over parts of the city on Monday for the first time in almost 60 years. Although there were conflicting reports on the scale of damage the insects caused in the city, the sudden sighting was enough to trigger some panic among residents given the ill omens locusts have historically been associated with.

“We saw them in huge numbers. Believe me, I could not see the sky,” said landlord Ali Ahmed Jokhio who lives in Karachi’s Malir locality. “The swarm was so large that it took about 20 minutes for it to cross this area,” he said. “Many residents here saw them flying over the Malir River as well.”

In Karachi, the locust swarms were mainly seen in the agricultural parts of Malir and Bin Qasim Town. From there, the swarms moved to other parts of the city, such as Baloch Colony, Manzoor Colony, Mehmoodabad, Azam Basti, Bahadurabad and Sharae Faisal.

Farmers in Malir complained that the swarms attacked crops and dealt significant damage to this year’s harvest. Pointing out that farms in Malir had not been sprayed with pesticides in the last three decades, they urged the Sindh government to immediately take steps to secure their investment.

Outside the city, huge swarms were also reported in Tharparkar district’s various tehsils. “Six tehsils have been worst hit by the locusts which have consumed a huge portion of this year’s millet crop and livestock fodder,” said Sajjad Bajeer, a journalist based in Tharparkar.

“On the upside, the insects themselves have provided something of food supply to locals. They catch them using gunny bags and cook them in various ways. Some residents boil and then dry them. Others fry them or use them to prepare curries of various types.”

Explaining the unusual sighting, entomologists and agriculture experts said that the locusts were currently on the return leg of their annual migration and just happened to stop in Karachi.

“These swarms originally flew into Pakistan from Yemen and Iran. They entered Pakistan three months ago through Balochistan and went on to attack crops in Dadu, Khairpur, Matiari, Badin, Sanghar and Tharparkar districts,” Sindh Abadgar Board representative Mahmood Nawaz Shah told The Express Tribune. “They did cause a huge loss in this year’s agricultural produce and some swarms even crossed over into India, but they now they appear to be flying back to Iran,” he said.

A World Wildlife Fund official suggested that the intense speed with which locust swarms have grown this year as a result of changes in climate patterns, particularly an increase in rain and a prolonged summer. He pointed out that the last time a locust swarm had been seen in Karachi was in 1960 and urged authorities to spray pesticides on an urgent basis.

However, Shah said the move would be by and large ineffective on locusts. However, he urged the authorities concerned to take proper preventive measures instead. “The Department of Plant and Protection of the Ministry of National Food, Security and Research has the resources and technology and it should have taken the necessary measures using their helicopters, but nothing has been done so far,” he lamented. “Both the federal and Sindh governments should have surveyed the province for the locust swarms, but their failure to carry out preventive measures has resulted in a huge loss to this year’s harvest.”

In a video message released in response to the sighting of locusts in Karachi, Sindh Agriculture Minister Ismail Rahoo insisted no crops had been harmed. Urging residents to remain calm, he assured them that the provincial government had sent teams to the area to deal with the issue. In a tongue-in-cheek statement, he also advised residents to “make use of the opportunity to cook locust biryani or karhai.”

Shah, however, disagreed with the minister’s opinion over crop damage and claimed it was an attempt to hide facts. “They don’t want to compensate farmers who have lost their crops,” he said. “Contrary to what the minister thinks, the swarm is still large on its way back to Iran. I would request him to research the matter properly.”

He also took offense with Rahoo’s ‘advice’ to cook the locusts and urged the minister to come up with a proper strategy to deal with the insects in the future.

WITH ADDITIONAL REPORTING BY VAKEEL RAO