Monume­nt was built at site, at a cost of millio­ns of rupees, in the middle of the city
By Shahid Khan
Published: November 12, 2019
Tweet Email 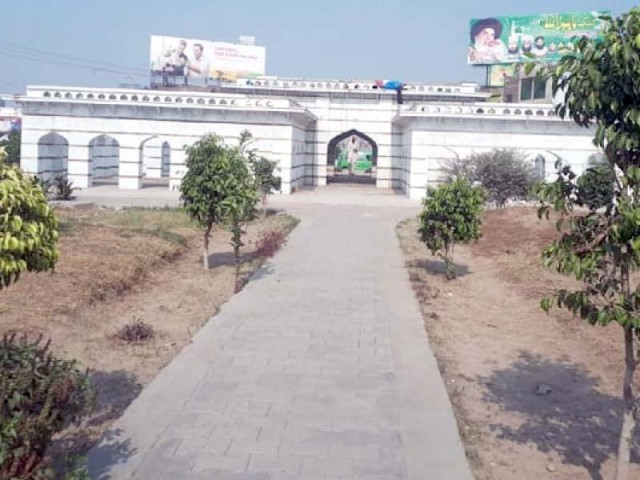 SHEIKHUPURA: Over a year ago, Batti Chowk in Sheikhupura, was a new name of Tajdar-e-Khatm-e-Nabuwat Chowk, but the change in name did not appear to bring any improvement to the situation of the locality.

The monument was built at the site, at a cost of millions of rupees, in the middle of the city. However, the built environment could not beautify the area, as one finds piles of garbage which smell makes it worse for passersby to move through. The area is also notorious for being a safe haven for drug addicts, many of whom stay there round the clock. In addition to this, stray dogs have also made this monument their home.

Reportedly, stray dogs can be seen running around all day and night or sleeping at the chowk while criminals involved in illicit activities can also be found at the site. This monument is considered a safe haven for criminals, especially for gamblers.

Due to a lack of maintenance; valuable plants worth millions of rupees are dehydrating and many plants are dying day by day. Municipal committee workers do not water the plants and they are not paying attention to their development either, due to which the number of plants is decreasing.

Moreover, no inquiry has taken place in regard to the valuable plants that were stolen overnight from the monument’s premises. No attention is paid by authorities concerned to damaged floor tiles, piles of garbage, filthy walls of the monument and the presence of drug addicts openly injecting drugs at the site.

A shopkeeper, present at the trade centre around the square, said that a group of drug dealers sell drug injections daily. “Instead of arresting them, some policemen come here daily to receive their share due to which they are actively involved in anti-social activities.”

Resistance against polio goes down to zero