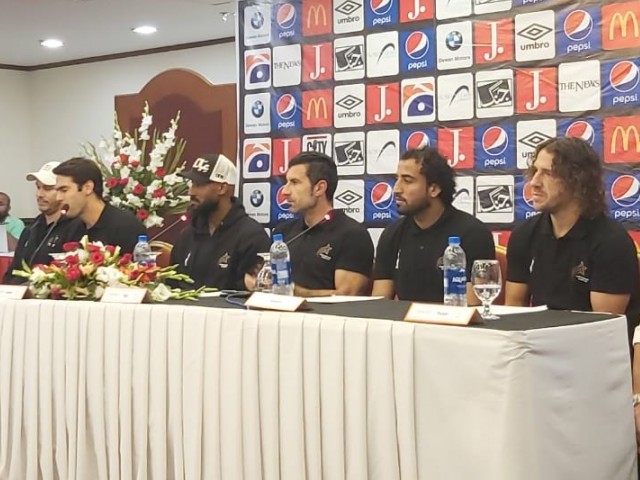 KARACHI: Football’s biggest star-cast including Ballon d’Or winner Ricardo Kaka and Luis Figo, alongside World Cup winner Carles Puyol and Champions League winner Nicolas Anelka are all set to face each other in an exhibition match in Karachi on Saturday at the Rahat Stadium, organised by World Soccer Stars.

Kaka said during the press conference in a private hotel on Saturday that, “It’s [To grow the game of football in a country] about time and investments, not just about money. Someone who wants to promote the game, someone that wants to improve the game and of course if I have a chance to help in some way like we are doing right now is good. If there is any other way we can help, of course we have enough knowledge on the field. We are ready for off-the-field work as well. Figo is ready much more than us, who is working for a lot of things around the football world but of course it’s important to help in any way.”

When asked about figuring out ways to attracting crowds to football in Pakistan, a country which is crazy about cricket, Anelka replied: “I think the new generation really likes football more than cricket now. We are here to promote this beautiful game. I’ve been watching the Premier League the most, and we’re happy to be here to promote football.”

“It’s a nice game. I’m sure a lot of kids in the street want to become football players so we’re here to promote and the fact we are coming here today, obviously football is going to grow like this in Pakistan.

“Hopefully, there will be a big league in Pakistan, let’s see what we want to achieve. After talking to you guys in Pakistan, there’s a big potential in Pakistan so we are waiting for you to do something. People like us will come, try to coach and whatever that is possible to do, to get Pakistani football back on its feet.”

When asked who is going to win the two exhibition matches, Figo said: “Well we want to win, I’ll let Kaka win in the half time but the end result will be of Figo team winning.”

Pakistan national football team captain Saddam Hussain was also present on the occasion and said: “We welcome all the honourable guests. I thank them for coming to my country. This is a very good opportunity for football lovers in Pakistan. Our youth is very excited to see them play live.”