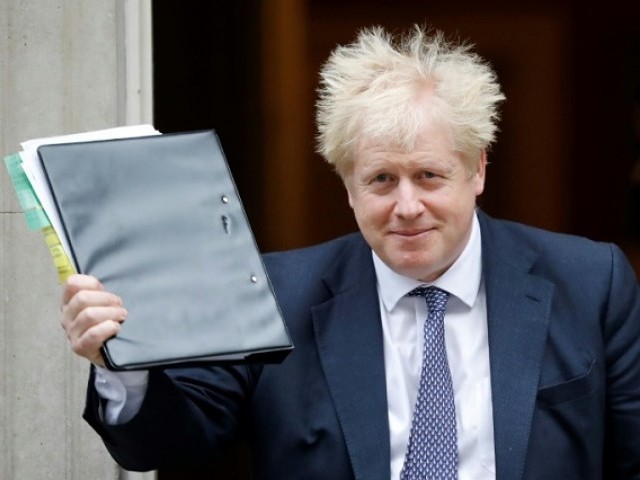 BIRMINGHAM, UNITED KINGDOM: British Prime Minister Boris Johnson on Wednesday launched the Conservatives’ election campaign in a traditional stronghold of the Labour opposition he hopes to win over by vowing to “get Brexit done”.

Addressing supporters who were dressed in t-shirts bearing the slogan, he urged voters to give him the majority needed to push his EU divorce deal through parliament and leave the bloc by the latest deadline of January 31.

“We can’t go on like this,” Johnson told the crowd in Birmingham, Britain’s second-biggest city, after decrying the political paralysis that has so far stalled its departure.

“On day one of the new parliament in December, we will start getting our new deal through so we get Brexit done in January and put the uncertainty behind us.”

Johnson had visited Queen Elizabeth II in Buckingham Palace earlier Wednesday to ask the 93-year-old monarch to dissolve parliament and get the December 12 contest underway.

He has called for the splintered country’s third general election in four years in a bid to resolve the crisis that has unfolded since voters opted in 2016 to break away from the European Union after nearly 50 years.

The ruling Conservatives’ lead in opinion polls over Labour, but it was a similar scenario in 2017 when former prime minister Theresa May then went on to lose her majority.

Johnson is reportedly planning to target seats held by the Labour opposition in northern and central England, where supporters of Brexit are more concentrated.

He is hoping traditional Labour voters will be sceptical of their leader Jeremy Corbyn’s plan to hold another referendum on Brexit after renegotiating new divorce terms with Brussels.

“Come with us and we will get Brexit done whereas this guy wants nothing more than dither and delay,” Johnson told the crowd.

The British premier has spent most of his four months in office making lavish government spending promises and paying weekly visits to hospitals and schools.

But the first day of the official campaign got off to a rocky start with the resignation of Welsh Secretary Alun Cairns over allegations that he hid knowledge of a former aide’s role in a rape trial.

That followed a foot-in-mouth moment from his ally Jacob Rees-Mogg, who had to “profoundly apologise” Tuesday for suggesting that some of the 72 victims of London’s 2017 Grenfell Tower inferno could have survived if they followed their “common sense” and fled for safety.

The fire brigade had instructed people to stay put and wait to be rescued.

Meanwhile, long-simmering divisions in the Labour Party between centrists and supporters of Corbyn were on display when deputy leader Tom Watson announced that he would not be standing in the election.

Watson, a vocal proponent of remaining in the EU, has been highly critical of Corbyn’s leadership on a number of issues including Brexit.

He insisted his reasons for standing down were “personal, not political” and that he wanted to “start a different kind of life”.

Ahead of his speech, Johnson had revved up his campaign by penning an incendiary front-page piece for The Daily Telegraph — a right-wing newspaper for which he worked for years — castigating Corbyn’s economic agenda.

“They pretend that their hatred is directed only at certain billionaires — and they point their fingers at individuals with a relish and a vindictiveness not seen since Stalin persecuted the kulaks,” he wrote.

The kulaks were wealthier farmers that the Soviet dictator killed in their thousands during his reign of terror in the 1930s.

He later told a campaign rally in a Brexit-backing region of northwest England that he will be “a very different kind of prime minister”.

“I don’t do personal attacks,” he said.

Corbyn is deeply suspicious of EU institutions and more sympathetic to Brexit supporters than most others in Labour leadership ranks.

Both Labour and the Tories will also be watching wearily as anti-EU populist Nigel Farage’s Brexit Party — which won European elections in May — tries to regain ground since lost at the polls.

Farage has savaged Johnson’s deal as not delivering Brexit fully, while also vowing to target Labour seats with large numbers of eurosceptics in them.