The hoardi­ngs credit­ed Sidhu and Imran for being the “real heroes who made the Kartar­pur Corrid­or a realit­y”
By News Desk
Published: November 7, 2019
Tweet Email 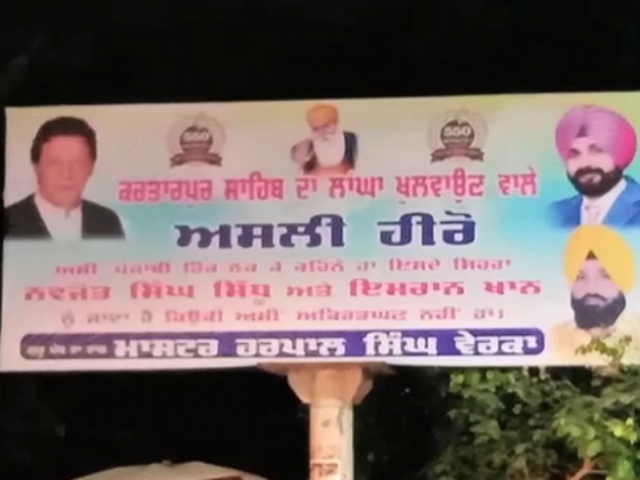 Authorities swiftly took down the hoardings hours later they were put up. PHOTO: INDIA TODAY

Billboards praising Prime Minister Imran Khan were taken down by authorities in Amritsar hours after they put up.

The Sikh community had put up billboards with pictures of Prime Minister Khan and Indian politician Navjot Singh Sidhu across the city to express their delight over the opening of Kartarpur Corridor.

The hoardings credited politician Sidhu and PM Imran for being the “real heroes who made the Kartarpur Corridor a reality”.

They were put up by Amritsar’s municipal councillor, Harpal Singh Verkha, who is known to be close to Sidhu.

Sidhu has already been granted permission by the Indian government to attend the corridor’s inauguration in Pakistan on November 9.

The corridor will be inaugurated by the premier on Baba Guru Nanak’s 550th birthday.

The Sikh community of Amritsar has announced that it will stage sit-ins and protests against this move by the government.

Sidhu was the first Indian politician to receive an invitation card for the opening ceremony bearing number 001 from Imran Khan two days ago.

Punjab government has already permitted him to visit the Pakistan on November 9 when the Kartarpur corridor will be formally inaugurated.

Karachi: The city of potholes