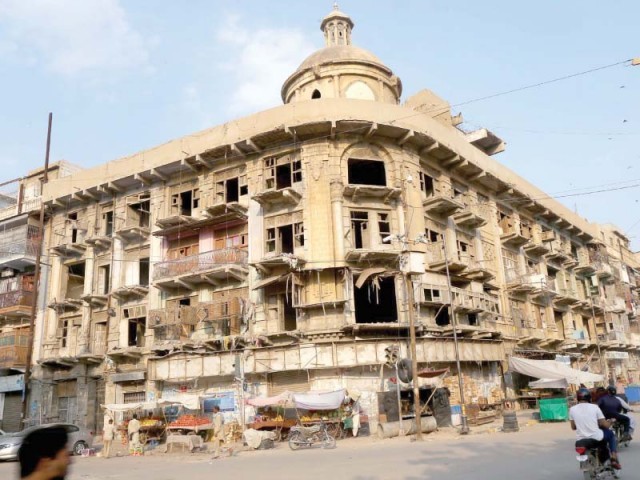 An old building in Saddar Town is in dilapidated condition, leaving it susceptible to accident. PHOTO: PPI

KARACHI: On June 28, 2018, the Supreme Court sought a report from the Sindh government on the steps taken to maintain and preserve Karachi’s heritage sites. The apex court asked the relevant authorities to submit a list of the buildings protected under the Sindh Cultural Heritage (Preservation) Act 1994. Since 2018 the restoration of Karachi and the preservation of its heritage sites has been under debate not just among architects, historians, urban planners, and the government, bureaucracy and local bodies, but also the citizens. The conversation, prompted by the recent anti-encroachment drives, under the directives of the apex court, has been centred on two dissenting points of view. There are those who argue that the encroachments are not necessarily removed from Karachi’s history. They make the case that the city’s people, its markets and bazaars, are intrinsic to its very spirit. And then, there are those who are more rigid in their definition of beauty – ‘restoration’ for them is more clinical, structural, physical and sanitised. Architect and urban planner Arif Hasan would distinguish between the two as ‘tangible and intangible’ cultural heritage. The former focuses primarily on the sites themselves while the latter extends beyond buildings – encompassing communities, monuments, memorials, and lives which have formed around it.

Speaking at a session titled ‘The Future of Karachi’s Heritage’ at The Karachi Conference 2019, Hasan personified the building as a woman. He called for a conceptual understanding of the word ‘heritage’ which goes beyond the building with a life of its own. “There are signs of history in every corner of our country. And you cannot look after all of them. The need of the time is that they should be saved from destruction. Sure, restore the ones you can, but protect them all [from deteriorating].”

The list that the Supreme Court sought, as panellist Danish Zuby of Shehri-Citizens for a better environment, pointed out, has been in the works since 1984. According to Zuby, by 1986, architect Yasmeen Lari had identified around 600 significant buildings in Karachi. “These ancient buildings of our city are like orphaned children. Although we’ve listed them out, we haven’t developed a proper mechanism for what’s to happen next. There is no institutional backing, no legal coverage [for the future of these sites].”

The speakers stressed that while laws exist to preserve Sindh’s heritage sites – Sindh Cultural Heritage (Preservation) Act 1994 – there is little to no work being done on the actual enactment of the law.

Zuby laid out the process in four stages with listing being only the first stage towards the preservation of heritage sites. The second stage, according to him, is an investigation of ownership and in certain cases, the people occupying or residing in the said building. This would then be followed by gauging the structural strength of the site and the initiation of remedial programmes in the fourth stage.

A problem, however, with these stages coming into practice, as panellist Dr Anila Naeem of NED University pointed out, is that there is little to no training imparted to government officials in terms of heritage preservation. The same flaw persists in our education system as well, she added.

The speakers were expanding upon the issues highlighted by archaeologist Dr Kaleemullah Lashari who gave examples of restoration efforts at Frere Hall, Edward House, and the Police Museum of Karachi, among others, as sites where restoration work reached a certain stage but was then met with red tape, which caused hindrances in some works and brought others to a halt. Chief among his examples was the case of Mithi Ram Hostel where restoration work was prevented from completion.

Lashari recounted, that there were proposed restoration works after the blast in 2009. “However, there were vested interests in not restoring the building. The owners wanted expansion work which was also beneficial for traders and they supported the demolition of the site instead,” he said while maintaining that the funds had been arranged for restoration by people engaged in the restoration work. According to Lashari, the vested interests connived with officials and the police to prevent the restoration of the building. The site is now occupied by Rangers who use the building as a sub-jail.  “The plan [for restoration] which is proposed is done with the sanction of the government and the funds are provided by the government. However, before reaching completion, the work is halted, and the government takes no notice of the matter.”

“We’ve made the Acts [the laws], but the rules haven’t been made,” said Lashari referring to the heritage preservation act. He emphasised that this systemic flaw has led to poor implementation of the existing laws at the expense of sites marked for preservation.

Meanwhile, a paper written by James Strachan, entitled, ‘The Karachi Waterworks’ was presented by Dr Abdul Rehman, which brought home Hasan’s point of heritage extending beyond buildings. Rehman walked the audience through the 150-year old water system, established by Strachan, of which one well still remains functional and supplies 500,000 gallons of water to Gadap Town on a daily basis. The network of wells exists to this day, and while they aren’t all functional, they are still significant fixtures in the lives and memories of those who live in the area.  Karachi Metropolitan Corporation Land Archives Project Director Fareed Ahmed also presented a paper explaining KMC’s efforts towards documentation of written heritage which included the print editions of local newspapers. The audience appreciated the KMC’s efforts and also knowingly laughed when Hasan asked Ahmed as to where these archives were stored.