Nobody allowed to create instability in Pakistan: DG ISPR

Nobody allowed to create instability in Pakistan: DG ISPR 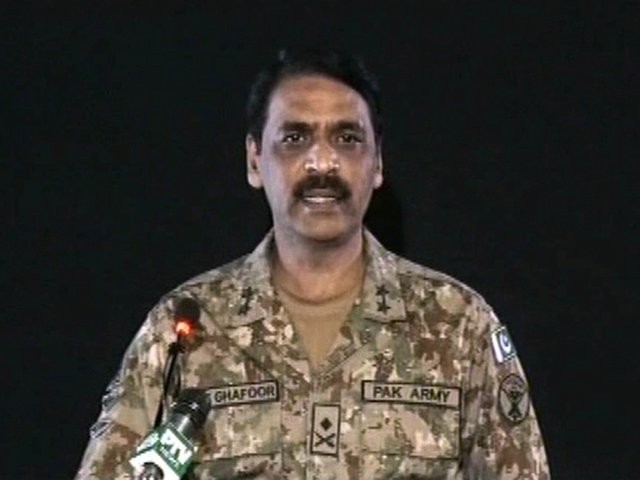 Maulana Fazlur Rehman, while addressing his supporters earlier in the day, said if the ‘institutions’ tried to protect the ‘illegitimate government’ after the expiration of a two-day ultimatum he has given to Prime Minister Imran Khan to resign, then the opposition would be free to form an opinion about the ‘institutions’.

“Maulana Fazlur Rehman is a senior politician. He should clarify which institution he is talking about,” DG ISPR Major General Asif Ghafoor said in a television interview. “Pakistan’s armed forces are an impartial state institution which always supports democratically elected governments,” he added.

“Nobody would be allowed to create instability as the country cannot afford chaos,” said the military spokesperson while referring to the security challenges faced by the country on eastern and western fronts. He added that the country has weathered stormy 20 years as it fought off the menace of terrorism.

“Peace has been restored in the country after countless sacrifices,” he said, adding that nobody would be allowed to disturb this hard-earned peace.  He said the people of Khyber-Pakhtunkhwa had bravely fought against terrorism and now they deserved to reap the dividends of peace.

The JUI-F chief in his Azadi March speech said that the PTI government had no right to stay in power as it had come to power through ‘systematic rigging’ in the 2018 general elections.

Maj-Gen Ghafoor said the military had fulfilled its constitutional responsibility in the elections. “If the opposition has any reservations [about the results], it can approach the relevant forums instead of leveling allegations on the streets,” he added.

“In democracies, issues should be resolved democratically,” he said and appreciated the “good coordination” between the negotiating committees of the government and the opposition. He hoped the two sides would sort out contentious matters amicably.

Talking about the security challenges faced by the country, the military spokesperson referred to unabated ceasefire violations by Indian forces on the eastern front where they frequently target civilian population.

Skirmishes along the Line of Control (LoC) have intensified in frequency and intensity since the Narendra Modi government put Occupied Kashmir under siege after revoking its semi-autonomous status in August.

The Indian Occupied Kashmir remains under siege literally cut off from the rest of the world as tens of thousands of Indian troops maintain a draconian curfew there. “There is no let-up in Indian atrocities in Occupied Kashmir,” Maj Gen Ghafoor said.

On the western front too, six Pakistani soldiers and five civilians were wounded when Afghan security forces fired at Pakistani border posts earlier this week.

“Currently, 100,000 troops are deployed at the eastern border and 200,000 at the western,” the military spokesperson said. “In this scenario if any mishap takes place it would not be in the best interest of the country.”