America's gun violence survivors on life after the bullet

America's gun violence survivors on life after the bullet 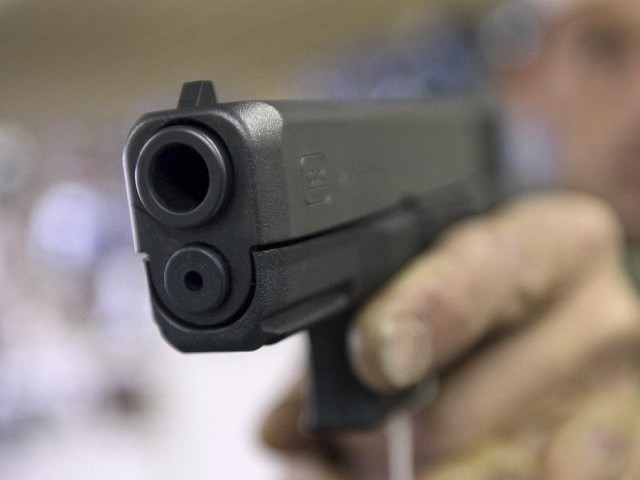 RALEIGH, UNITED STATES: The scourge of gun violence in the United States (US) is no secret: some 36,000 Americans are killed every year on average, or about 100 a day, in homicides, suicides, police-involved shootings and accidents.

Hundreds more are shot and wounded daily in the most heavily armed country in the world. Those victims – of mass shootings, or just everyday arguments that go awry – live on with their wounds.

The following are profiles of three Americans whose lives were changed forever when they ended up on the wrong end of a gun barrel:

Kacey Ruegsegger was sitting in the library at Columbine High School when she heard a series of pops from outside.

She turned to see what was going on, but it stopped just as suddenly as it had started, and she went back to reading her magazine. Her fellow students didn’t pay much attention to the noise either. 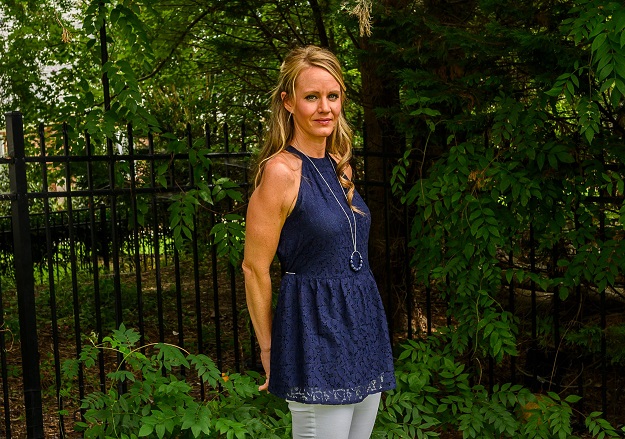 Kacey Ruegsegger Johnson, a survivor of the Columbine High school shooting in 1999, poses for a photo in her backyard in Raleigh, North Carolina (Photo: AFP)

It was April 20 1999: Kacey’s favourite band NSYNC was riding high in the charts and an animated dancing baby was taking the dial-up era internet by storm, and school shootings were nearly unheard of.
The sophomore shouldn’t have even been at school at that time of the day. 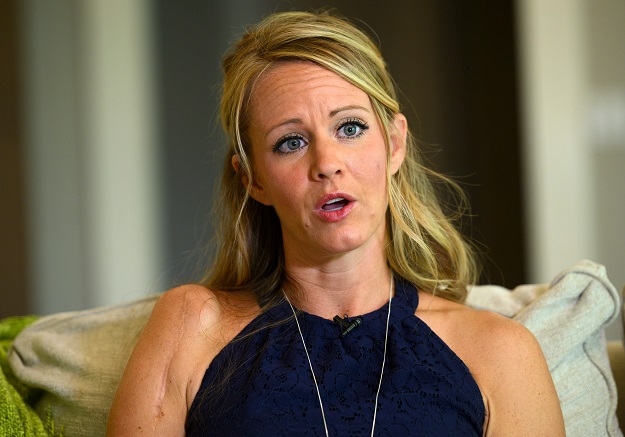 Every day at lunchtime, the blonde 17-year-old would drive with her best friend back home to eat and discuss their latest crushes.

On that day though, Kacey couldn’t find her friend. After realizing it was too late to head home, she wolfed down a granola bar and headed to the library.

Minutes later, a teacher entered, screaming at everyone that there were boys with guns.

“The panic and her voice made it clear that this was real, and we needed to get down and hide,” Ruegsegger told AFP in an interview at her home in Raleigh, North Carolina. 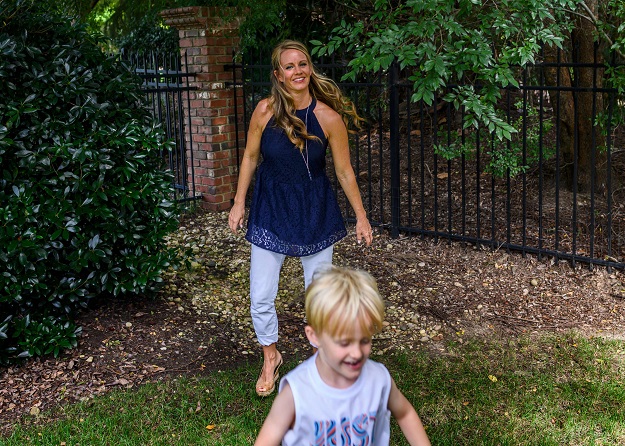 Kacey Ruegsegger Johnson plays with her son Corban, 5, in her backyard (Photo: AFP)

She jumped beneath a computer cubicle, pulled a chair up tight against her and waited, thinking she had found a good spot and hoping whoever was shooting would pass her by.

“He killed the boy who’d been hiding behind me, turned the gun on me, and I remember hearing the shot that hit me,” Ruegsegger recalled.

The close-range shotgun blast passed through her right shoulder from back to front. She’d been plugging her ears so it also went through her hand. 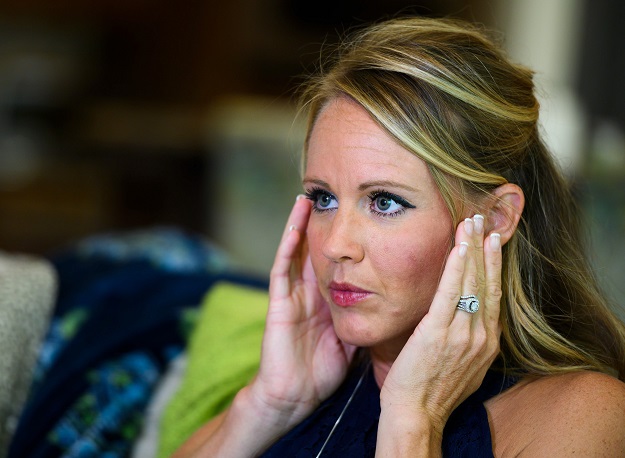 Kacey Ruegsegger Johnson speaks with reporters from AFP in her house (Photo: AFP)

A dozen students and a teacher were killed by the two teenage boys who then turned the weapons on themselves.

For Ruegsegger, who now uses her married name Johnson, it was the start of a long journey that has so far included a dozen surgeries.

Her weeks in the hospital passed by in a daze, with intense media attention on her family, but one positive was the outpouring of well-wishes from around the world.

She even received a visit from NSYNC, the boy band led by a young Justin Timberlake: a dream come true at a dark time.

Her right arm was at grave risk of amputation.

It was eventually saved thanks to a bone transplant but the results aren’t perfect: she has limited mobility, her shoulders are slightly asymmetrical, and there’s visible scarring.

She still experiences intermittent pain, and she may eventually need another bone donor.

But the graft changed her life.

Initially, it allowed her to return to her passion – horse showing – giving her a much-needed boost after the attack. She even competed in the world championship.

Later, it allowed her to take up a brief but rewarding career as an oncology nurse, though she had to give up her job after her doctor made clear she could lose her arm due to the added strain.

If the physical injuries were painful and limiting, the trauma of the shooting was even worse.

For months after the shooting, she would sleep in her parents’ room. For a decade, she suffered from intense episodes of post-traumatic stress disorder (PTSD).

“If I was at the grocery store, and somebody walked in, and for whatever reason, it sparked a panic attack in me, I had to leave and go home, the day was ruined.”

Slowly, and with the help of her husband Patrick, she was able to gain control, refusing to allow her attackers to continue to have power over her.

The couple now has four children. 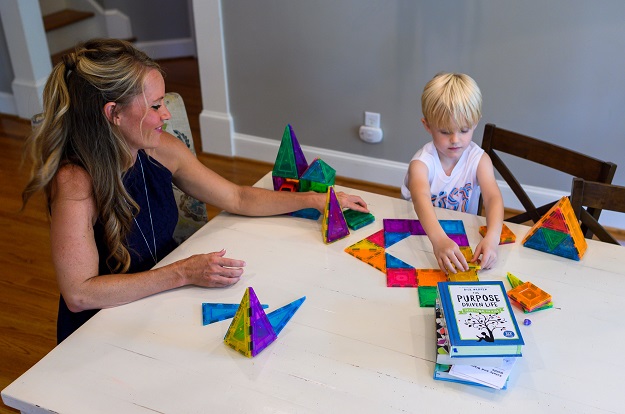 Kacey Ruegsegger Johnson plays with her son Corban in her backyard (Photo: AFP)

She has written a book, “Over My Shoulder” about her experiences and she works as a motivational speaker.

Early on, she was asked if the bone donation had saved her life.

Initially, she said no “because medically it didn’t,” but on further reflection, she realized it had.

“Because I wasn’t a 17-year-old amputee, because I can wrap two arms around my kids, that completely saved my quality of life which, to me, saved my life,” she said.

It’s a story that’s all too familiar: young men get into an altercation at a party, usually over a trivial issue, and the fight gets physical.

But in the East Coast city of Baltimore, one of the deadliest in America, fights can and do end in a hail of bullets.

A single round was all it took for Antonio Pinder to live a life defined by excruciating pain. 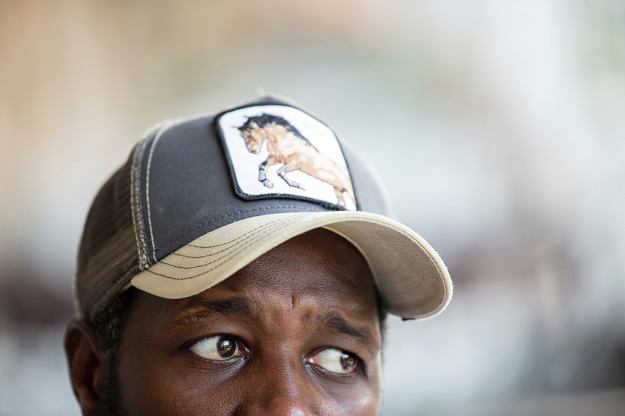 Baltimore resident and gunshot survivor Antonio Pinder, 31, speaks during an interview at his Uncle’s house in West Baltimore (Photo: AFP)

It was 2007 and Pinder, then 19, had gone out with his uncle and best friend Lamont Medley to pick up his mother from a house party.

Once inside, Pinder began chatting with a young woman, which displeased another guest, and an argument ensued.

The next thing he knew, a bullet had punched a hole in his lower left torso and exited through his back, and he was running for his life.

“I ran through the alley and was just trying to get away, with a hole in me,” he said. 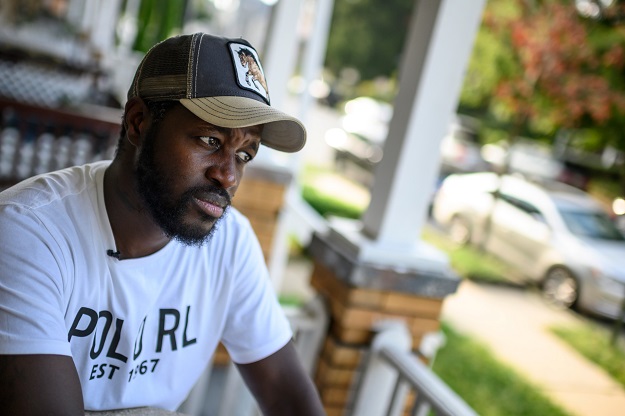 Baltimore resident and gunshot survivor Antonio Pinder, 31, speaks during an interview at his Uncle’s house in West Baltimore (Photo: AFP)

He collapsed in the arms of a cousin who came to his aid. He thought he was going to die.

Pinder, now 31, is tall and well-built, but his healthy appearance masks an ongoing medical struggle that has kept him out of work for years and shattered his self-confidence.

As the bullet tore through his body, it destroyed half of his intestines. 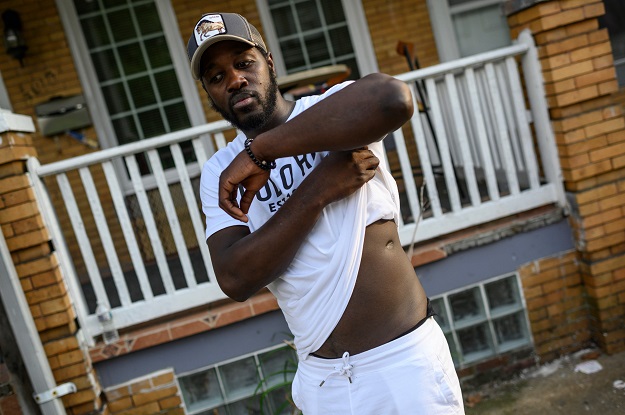 After recovering from his first surgery, he was initially able to go back to work as a granite and marble installation contractor.

But a subsequent procedure in 2015 to insert a hernia mesh triggered a backslide. Pinder is now trying to sue the doctor, blaming the implanted device for recurring infections and amplifying his pain.

On top of that, he’s had three bowel obstructions requiring hospitalizations.

It also forces him to eat small meals and avoid many types of food like red meat – or face hours of vomiting and more pain. 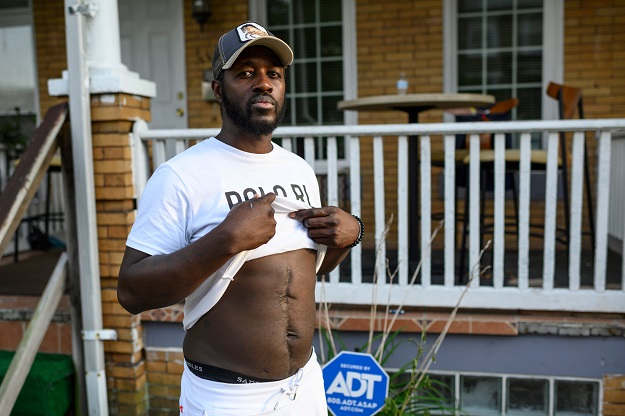 His doctor has told him his body cannot endure full-time work, leaving him struggling to provide for his fiancee and six children.

“I feel like I’m letting them down as a parent a lot of times,” he said, adding he was “depressed.”

For support, he turns to Medley, a former convicted felon turned violence mediator who has also suffered gun and knife injuries.

Both of them are convinced that the problems the city faces won’t end until guns are taken off the streets.

Pinder’s assailant has been released from prison.

Anthony Borges arrived with his family to live in southern Florida in 2014 when he was just 12. They had fled political chaos and rampant crime in Venezuela.

Four years later, Anthony was shot five times at Marjory Stoneman Douglas High School – in the back, under the armpit and three times in one leg. 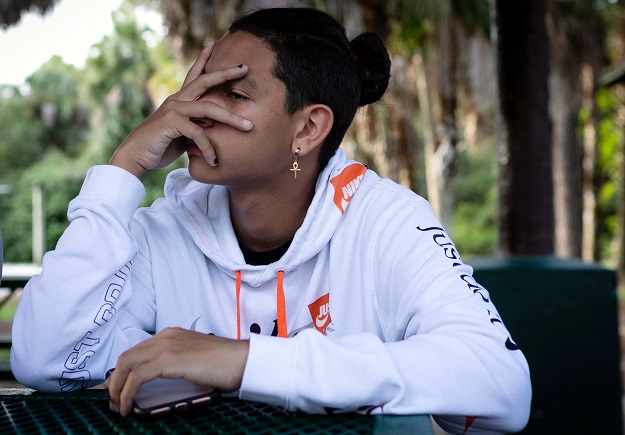 He is a victim of the now infamous Parkland shooting on Valentine’s Day last year, in which 17 people were killed by a former student.

“You struggle to get out of Venezuela to make a new life and then this happens,” said Anthony, now 16, at a park in neighbouring Coral Springs, where he lives.

After being shot the first time in the back, Anthony was able to enter a classroom where 20 other students were hiding. He used his body to barricade the door, getting struck four more times before the gunman moved on. 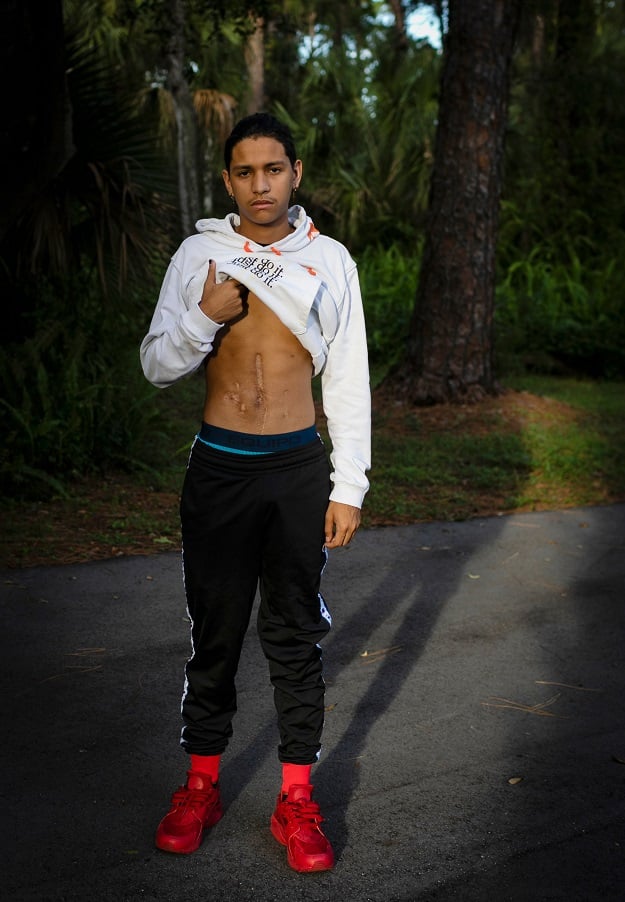 They now call him “Iron Man” – but that’s not how he sees it.
“I don’t really feel like a hero – I’m just a normal person,” Anthony said.

Without hesitation, he lifts his hoodie to reveal his numerous scars.

After 13 surgeries and months of physical therapy, he has regained mobility throughout his body except on one foot. He still can’t move some fingers and may need another operation. 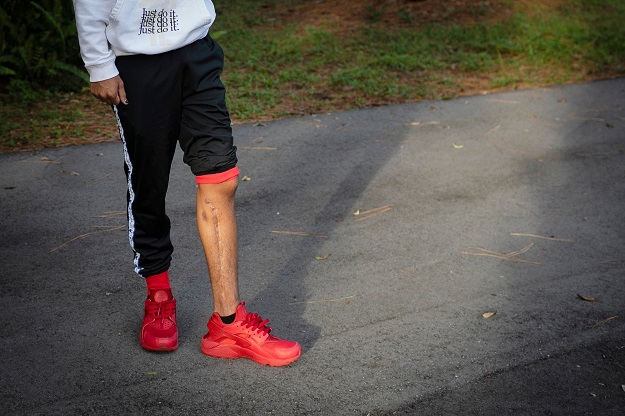 And there have been nightmares.

“Sometimes I have dreams,” he says. “Not as many as before, but I do dream. And sometimes I get pain in my legs, in my back, when I walk.”

Anthony says little and, when he does, he seems to speak to himself.

“All this has made him quieter and more reserved,” said his father, Royer Borges, a property manager. 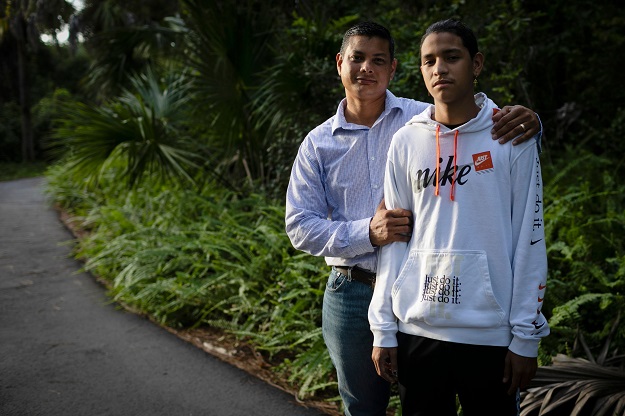 Anthony Borges and his father Royer Borges pose for a photo during an interview with AFP (Photo: AFP)

But Anthony smiles and his eyes light up when asked about the visit he made in March to see his favourite football team FC Barcelona play in Spain. It helped him with his recovery.

Anthony has always wanted to play the sport professionally. For now, he is able to play with his friends, and the family is grateful he did not lose his leg.

As for his education, Anthony is now homeschooled as his family doesn’t trust the public school system to keep him safe.

They are also suing county and school officials for not doing more to protect the students from the shooter, who had a history of mental health issues. 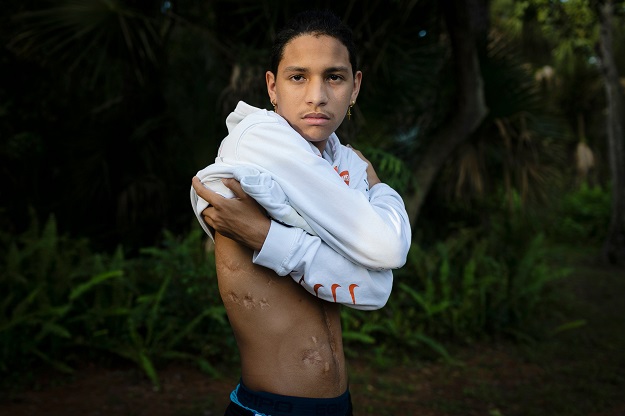 When the case is over, the family may move to Europe.

Many of Anthony’s former classmates have gone on to become leaders in the gun control movement, but that’s not a path he has pursued.

His father, a conservative Christian, believes the gun crisis is more of a mental health issue. 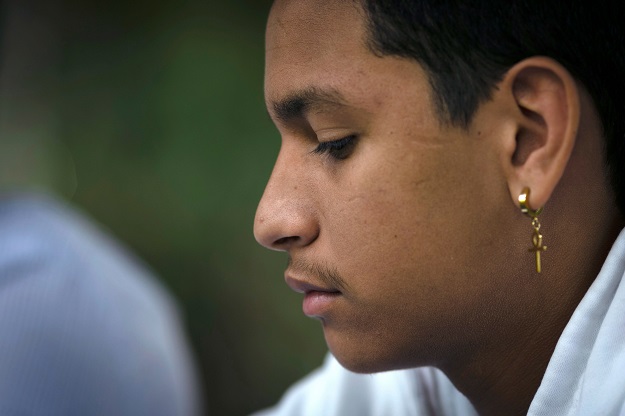 Anthony Borges speaks during an interview with AFP (Photo: AFP)

Anthony says he learned on Instagram about the El Paso shooting – and identified with their pain.

“I felt something horrible because I know what it’s like,” he said.