LAHORE: At least 74 lives were snuffed out when a blaze ignited by a cooking gas cylinder blast swept through a passenger train which was en route to Rawalpindi from Karachi on Thursday.

The cylinder brought by some passengers said to be members of Tableeghi Jamaat on-board Tezgam Express exploded when the train was chugging past Liaquatpur city in the southern Punjab district of Rahim Yar Khan, according to officials.

The fire, fanned by wind on the cruising train, quickly spread to two other compartments of the train catching most passengers off guard. The train driver, Muhammad Siddique, said the fire started at 6:18 in the morning.

“The burning carriages were detached from the locomotive to save other carriages,” he said in a television interview after the accident. 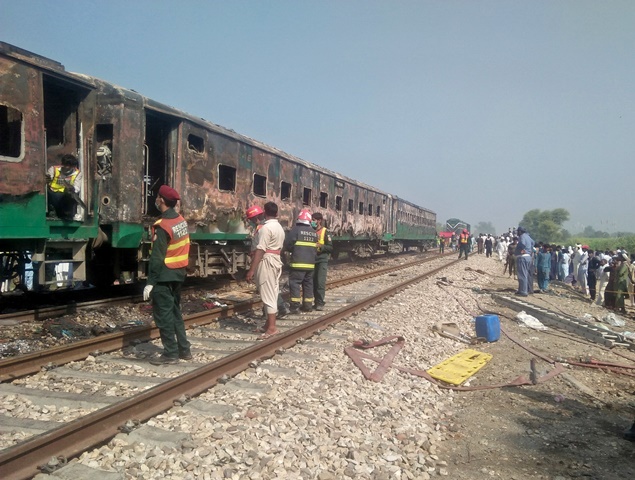 Some of the victims were killed by head injuries sustained as they leapt from the moving train, said Muhammad Nadeem Zia, a medical superintendent at the District Headquarters Hospital in Liaquatpur city.

The death toll is likely to rise further, with at least 40 more people injured and many in critical condition.

The injured have been driven to the DHQ Hospital in Liaquatpur and Victoria Hospital in Bahawalpur, the minister said, adding that only 18 of the bodies were identifiable. DNA analysis would be needed to identify rest of the bodies which are charred beyond recognition.

The fire started after the passengers turned the cooking gas cylinder on to prepare breakfast on board the train. The conflagration reduced three economy-class carriages of the train to charred heaps. 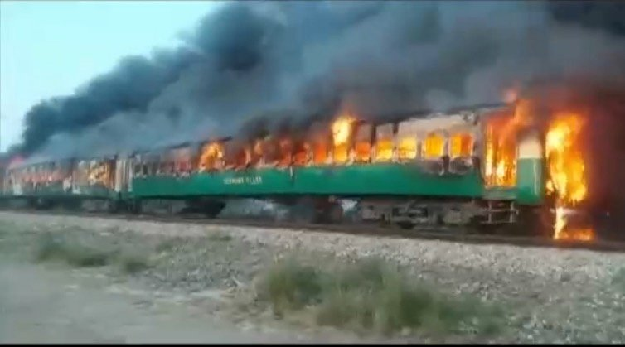 Railways Minister Sheikh Rashid confirmed two cooking gas cylinders blew up. “Two stoves blew up when people were cooking breakfast, the presence of kerosene oil with the passengers in (the) moving train further spread the fire,” he said.

“Many people saved their lives by jumping off the train,” the minister said. But all of them weren’t lucky enough as most of the deaths occurred from head injuries received by passengers after hitting the ground.

Passengers sneaking stoves into trains to prepare meal on long journey is a common problem, the minister said.

He added that two of the carriages that caught fire were booked in the name Ameer Hussain, a Tableeghi Jamaat emir. The minister blamed the passengers but also called it a ‘failure’ of the Railways authorities who had failed to carry out thorough checking of the passengers’ luggage.

Pakistan Railways Divisional Officer Multan Division Nabila Aslam told DawnNewsTV that the passengers must have “hidden the gas cylinder in their clothes” while boarding the train as bringing one on-board is strictly prohibited. 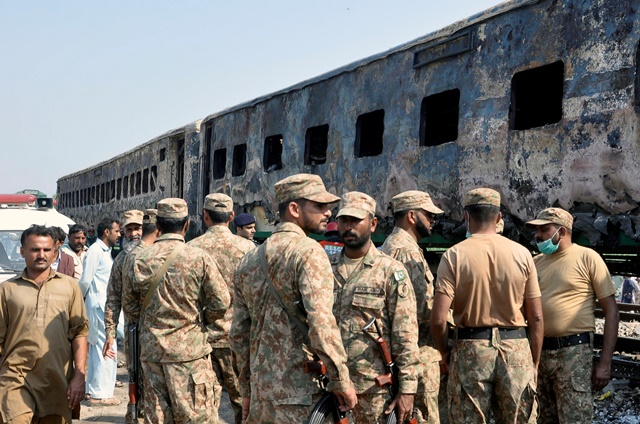 Rashid said the passengers who had been using the cooking gas cylinder had been warned by a guard and the driver. “They turned off the stove in front of the guard, but when he left, they turned it back on,” he claimed.

Television footage showed fire and black smoke pouring from the train’s windows after it came to a stop on a stretch of line flanked by fields.

The Pakistan Army sent doctors and paramedics to the site to assist the civil administration in rescue and relief activities. Army Aviation helicopters were also dispatched from Multan to evacuate the critically injured, according to the military’s media wing.

The railways minister, who travelled to the site of the tragedy, announced that a financial compensation of Rs1.5 million will be paid to the heirs of each of the deceased while Rs500,000 will be provided to the injured.

“There were 207 passengers on-board the three economy coaches of Tezgam which caught fire during the incident,” Nabila Aslam said and added that the railway track has now been cleared for traffic on up and down routes. 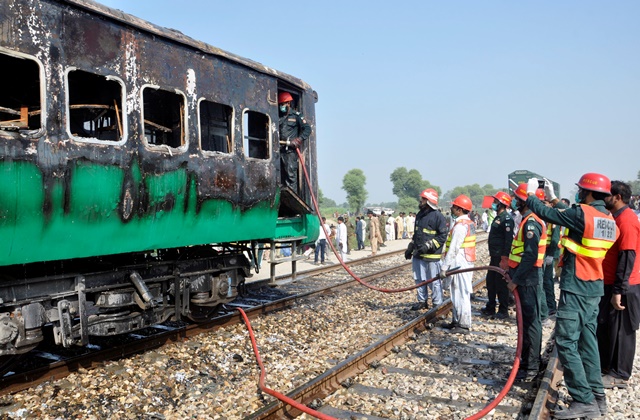 Radio Pakistan stated that more information regarding the Tezgam incident can be obtained through a designated helpline: 0300-8060780. An emergency centre established at Karachi railway station can be contacted at: 091-99213506.

Prime Minister Imran Khan expressed deep grief and sorrow over the loss of lives in the train tragedy and ordered an immediate inquiry.

In a Twitter post, he said: “Deeply saddened by the terrible tragedy of the Tezgam train. My condolences go to the victims’ families & prayers for the speedy recovery of the injured. I have ordered an immediate inquiry to be completed on an urgent basis.”

Deeply saddened by the terrible tragedy of the Tezgam train. My condolences go to the victims' families & prayers for the speedy recovery of the injured. I have ordered an immediate inquiry to be completed on an urgent basis.

He also directed the authorities concerned to provide prompt and best possible medical treatment to those injured in the incident. 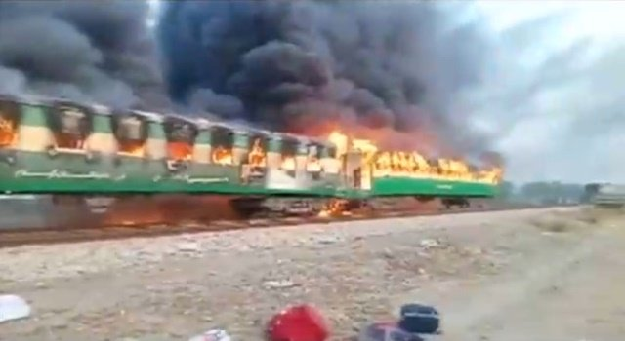 The railways minister, in response to calls for him to step down over the tragedy, said his resignation was ‘no issue’. “Prime Minister Imran Khan has already ordered an inquiry. On Sunday, I will discuss more details,” he said.

President Dr Arif Alvi expressed profound grief on the loss of precious lives in the tragic incident. Praying for the departed souls and the bereaved families, he wished speedy recovery to the injured.

Pakistan Peoples Party Chairman Bilawal Bhutto Zardari condoled with the bereaved families and said the government should pay compensation to the victims and arrange for better treatment facilities.

The country’s railway network has fallen into disrepair in recent years due to chronic under-investment and poor maintenance. Eleven people were killed in an accident in July and four in another in September.

About 130 people were killed in 2005 when a train rammed into another at a station in Sindh, and a third train hit the wreckage.

PHA to set up libraries at parks