Cyclone Kyarr 730km from Karachi, no direct threat to any coastal area of Pakistan

Cyclone Kyarr 730km from Karachi, no direct threat to any coastal area of Pakistan

Weathe­r likely to remain cloudy over the next 24 hours in Karach­i, drizzl­e expect­ed
By Aftab Khan
Published: October 29, 2019
Tweet Email

“The Super Cyclonic Storm over the central Arabian Sea has tracked northwestward during last 12 hours,” the advisory added.

According to Chief Meteorologist Sardar Sarfaraz, Kyarr is a slow-moving storm which is moving about 10 to 12 kilometres per hour.

The advisory also states that the superstorm is 665 kilometres off the Gwadar and coast 1012 kilometres northeast off Salalah (Oman).

Kyarr is likely to move further northwestwards till tomorrow and then turn southwestward.

The PMD maintains that there is no direct threat to any coastal area of Pakistan. However, due to exceptionally strong winds centred around the storm and roughness in the sea “low-laying areas may suffer from water intrusion due to high-tide”.

“Scattered rain is expected in lower Sindh and along Makran Coast during Wednesday-Friday,” PMD stated. “Fishermen are advised not to venture in the open sea till October 31.”

According to Sarfaraz, Kyarr was formed on October 25 and is the strongest cyclone after the ‘Goryu’ super cyclone that hit the coastal areas of the country in 2007.

It is the ninth super cyclone to have developed in the North Indian Ocean after ‘Goryu’. 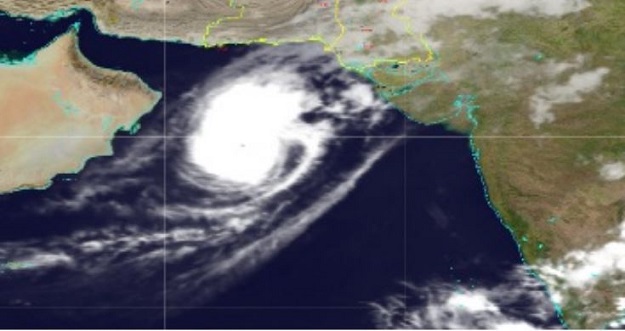 According to the Fishermen Cooperative Society, dozens of boats were called in from the sea after the red alert was issued on Monday.

However, a few boats are still out in the sea and are on their way back. As per Provincial Disaster Management Authority (PDMA) spokesperson, the disaster management staff is available to rescue and relocate people displaced by the storm, but residents of the area are not ready to leave their towns. The PDMA has, however, set up 300 camps to cope with any untoward situation.

Meanwhile, the Sindh local government department has issued an alert regarding Cyclone Kyarr, with the LG minister Nasir Hussain Shah directing officials to initiate rescue work in areas affected by the storm in collaboration with the National Disaster Management Authority.