JUI-F chief says a storm will enter the corrid­ors of power and take away the garbag­e
By ​ Our Correspondent
Published: October 29, 2019
Tweet Email 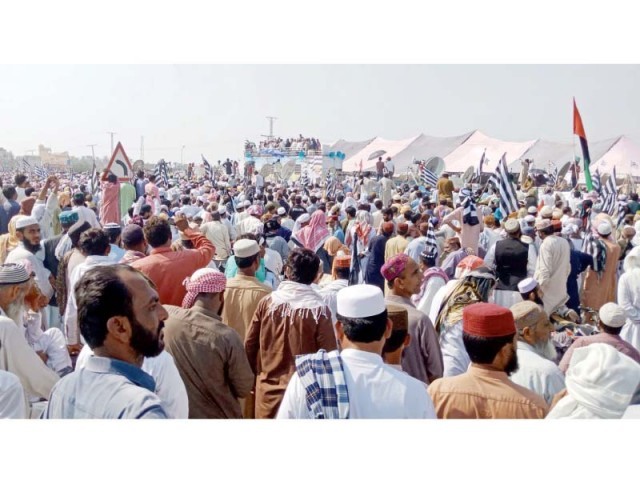 Workers of JUI-F and supporters of the Azadi march gather to receive Maulana Fazalur Rehman as he arrives at Rohri Bus Terminal, Sukkur, before they head towards Punjab. PHOTO: ONLINE

HYDERABAD: The Jamiat Ulema-e-Islam-Fazl’s chief, Maulana Fazlur Rehman, has said the war drums of political war with the Pakistan Tehreek-e-Insaaf government have been beaten and that there will be no retreat from the Azadi march. “We have to fight the political war with them [PTI government],” said Rehman, as he addressed thousands of supporters on the second day of the march in Sukkur district on Monday.

He was flanked by Pakistan Peoples Party’s Sindh President Nisar Ahmed Khuhro and provincial minister Nasir Hussain Shah, JUP-Noorani’s Shah Owais Noorani, besides other JUI-F leaders on the stage. The march later headed to Punjab, crossing the inter-provincial border at around 8pm with the party’s chief leading the caravan in his container.

“We have landed on the ground and now going back will be a sin for which we aren’t ready. We have to move ahead with confidence and courage,” he continued. Rehman said that the opposition, especially the march, has started a struggle for the survival of Pakistan whose economy has been put on a path of submersion.

He warned that the country’s existence has come at stake and the Constitution of Pakistan has been made inconsequential. “We want to stabilise democracy and protect the constitution, economy, the people affected by the PTI government’s policies as well as Islam, Khatam-e-Nabuwat [finality of prophethood] and Namoos-e-Risalat.”

Pointing towards the huge participation in the caravan, the JUI-F’s chief said that a flood of people is heading towards Islamabad, adding that the caravan will take the shape of a big storm as it entered Islamabad. “The storm will enter the corridors of power and it will take away [baha] the garbage lying in those corridors.”

He accused the government of making the Kashmir issue knotty and shedding ‘crocodile tears’ over the plight of Kashmiri people. “The whole world’s leaders know that you have traded on Kashmir. Don’t further deceive the Kashmiris by expressing fake sympathy.”

Rehman came down hard on Pakistan Electronic Media Regulatory Authority over its latest ban on the anchorpersons of the news channels’ talk shows. He said that the ban amounted to gagging the voice of Pakistani people. “Many news channels have been barred from covering our march but when the PM [Imran Khan] speaks to senior journalists, he says he hasn’t imposed a ban.”

PPP’s Nisar Khuhro said that the selected government cannot continue for longer in power. “The public has grown fed up with the selected and inept government.” He contended that Khan has become a curse for the country and the era of employing abusive language in politics should now come to an end.

The JUP’s Owais Noorani said the march will reach Islamabad crossing all obstacles on the way. The JUI-F’s Rashid Mehmood Soomro said the party’s Sindh chapter attained the target of collecting 400,000 people in their power shows in Karachi and Sukkur. The provincial leaders of Pakistan Muslim League-Nawaz, National Party and other political parties also addressed the marchers.

Ghani stresses upon educators to focus on students’ character building