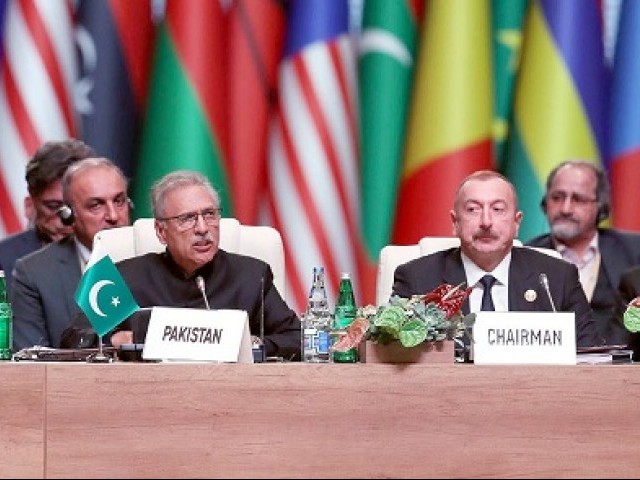 Addressing the 18th Summit of the 120-member Non-Aligned Movement here on Friday, the president said, “Indian actions of August 5, 2019 designed to alter the disputed status of Jammu and Kashmir and change its demographical composition and identity constitute to willful violation of the UN Security Council resolutions and international law.”

Started on Friday, the two-day summit is being attended by the dignitaries from around 60 countries, including Venezuela, Iran, Pakistan, Cuba, Afghanistan and several African countries, besides the representatives from international organisations.

The NAM covers 55 per cent of the world’s population.

The president told the international gathering that the people of Jammu and Kashmir remained subjected to the foreign occupation for over seven decades.

He said, “Indian actions in Jammu and Kashmir represent a direct assault on the Kashmir’s right to self-determination which is illegal, immoral and unethical.”

He said such draconian measures found no parallel in this age and time, adding that the denial of Kashmiris’ right to self-determination and mischievous attempt to associate their legitimate struggle with terrorism had run their course.

He believed that the self-serving tactics could not weaken the resolve of the Kashmiri people to continue their struggle for inalienable rights guaranteed under international laws and consistently reaffirmed by the movement.

The president said that lasting peace in the region could only be achieved through the resolution of outstanding disputes which also hindered the growth and realisation of countries’ true economic potential. “Sustainable development is linked to peace and security and Pakistan has been an advocate and practitioner of this integrated approach,” said Alvi, adding that consistent with its vision for Naya Pakistan, the government had fully integrated the Sustainable Development Goals (SDGs) into its national development plans.

He said the government had launched Ehsaas Programme designed to provide social security nets, alleviate poverty, enhance investments in universal health and education without which no country could prosper.

The president said the endeavours to achieve the SDGs would fail unless the structural causes of poverty were also addressed among and within the countries.

He said it was imperative that international trade was free and fair for all the nations, investment should be made profitable for all partners and weak and disadvantaged nations and communities must be supported to eradicate poverty.

Reiterating Pakistan’s policy of a peaceful neighbourhood, the president said the government’s vision of peaceful development would continue to guide its efforts to help create an environment that fostered cooperation and development.

He said Pakistan had demonstrated this commitment by facilitating political settlement in Afghanistan by supporting an Afghan-led and Afghan-owned peace process.

He said Pakistan remained concerned about the evolving developments in the Middle East and Gulf region and was endeavouring to facilitate a process to help ease tension and resolve differences through political and diplomatic means.

“A reformed UNSC must afford NAM member states an equal opportunity to contribute to the maintenance of peace and security,” he said, adding that pandering to the ambition of a few states, especially those that willfully violated the UNSC resolutions, would be counter-productive and undermined the spirit of the UN Charter, international laws and the reform process.

He said NAM members should reaffirm commitment to cooperative multilateralism to pursue the shared goals of more democratic and equitable and just world order, not based on centre of privilege and power, but one that fostered the ideals of prosperity and well-being of all.