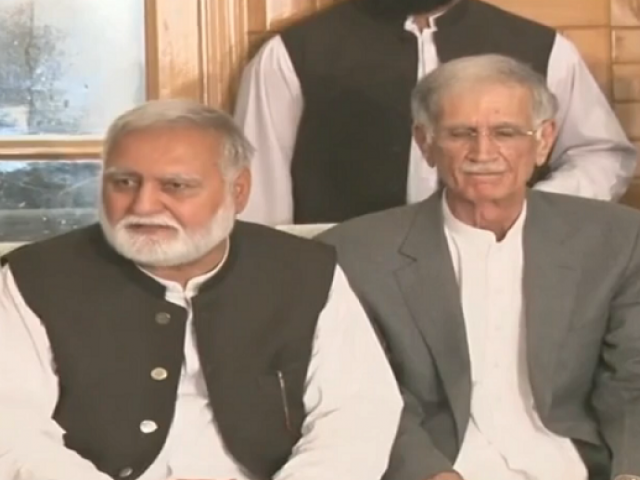 Akram Durrani (left) with Pervez Khattak during the meeting held in Islamabad. SCREENGRAB

ISLAMABAD: Rejecting the demands of the joint opposition’s Rahbar Committee, the government’s negotiating team on Friday refused to allow  the participants of the Jamiat Ulema-e-Islam-Fazl’s (JUI-F) ‘Azadi march’ on October 31 to culminate anywhere in Islamabad except at Parade Ground. The two sides, which held two rounds of talks to reach an understanding, only agreed on continuing the dialogue at the end the day.

Being flexible on its demand to march all the way to D-Chowk, the opposition agreed to stage the rally at Jinnah Avenue instead, but the government’s team after discussing the matter with Prime Minister Imran Khan, refused to permit that as well.

The two sides met at the residence of JUI-F’s Akram Durrani, the head of the Rahbar Committee. During the first round, the opposition demanded that the marchers be allowed to rally up till D-Chowk.

However, the government team informed the other side that as per the verdicts of the Supreme Court and the Islamabad High Court, protests could only be staged at the federal capital’s Parade Ground – also called Democracy Park.

The Rahbar Committee then proposed allowing the rally to take place at Jinnah Avenue. The two sides then took a break to inform their respective leaderships about the discussion that took place during the meeting.

After the first round, Defence Minister Pervez Khattak, the head of the government committee, told the media that both sides had exchanged proposals and there could be “good news” soon.

Durrani, who was sitting alongside Khattak, said the talks were held in a cordial atmosphere..

The two sides met again after the break but the second sitting ended much quicker than the first one which had lasted for nearly two hours.

Speaking to the media after the second round of talks, Khattak and Durrani said that the talks had remained inconclusive so far but they would continue.

Awami National Party’s (ANP) Mian Iftikhar Hussain, a member of the Rahbar Committee, told reporters that the opposition had exhibited flexibility and agreed to stage the protest at Jinnah Avenue but the government did not accept its offer.

Pakistan Tehreek-e-Insaf (PTI) leader Asad Umar, who is part of the government’s team, told the media that the government could not resort to contempt of court. “Both the government and the opposition should respect court decisions,” he added.

According to sources, PM Imran told Khattak that the government could not allow a protest at D-Chowk or anywhere else in the federal capital with the exception of Parade Ground in light of court orders.

He also told Khattak that the government would try to sort out issues through talks in accordance with democratic principles but the opposition was being stubborn and nobody would be allowed to challenge the writ of the state.