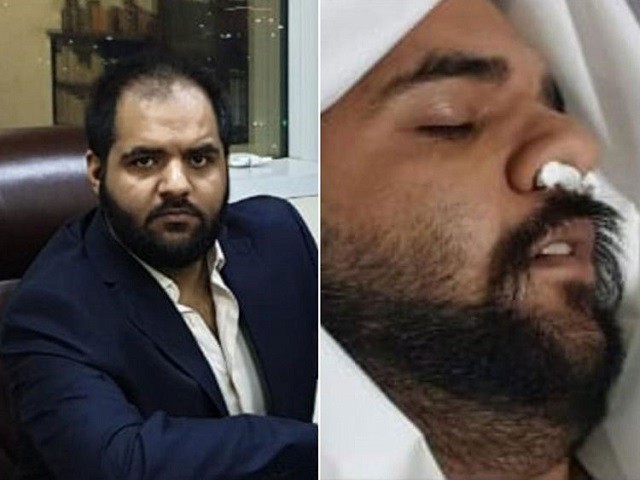 According to Gulf News, the “ideological worker” of the political party had staged his ‘death’ in an apparent road accident in Sharjah on July 17, 2017.

Hayyab’s untimely ‘death’ was even mourned by the Karachi-based party. 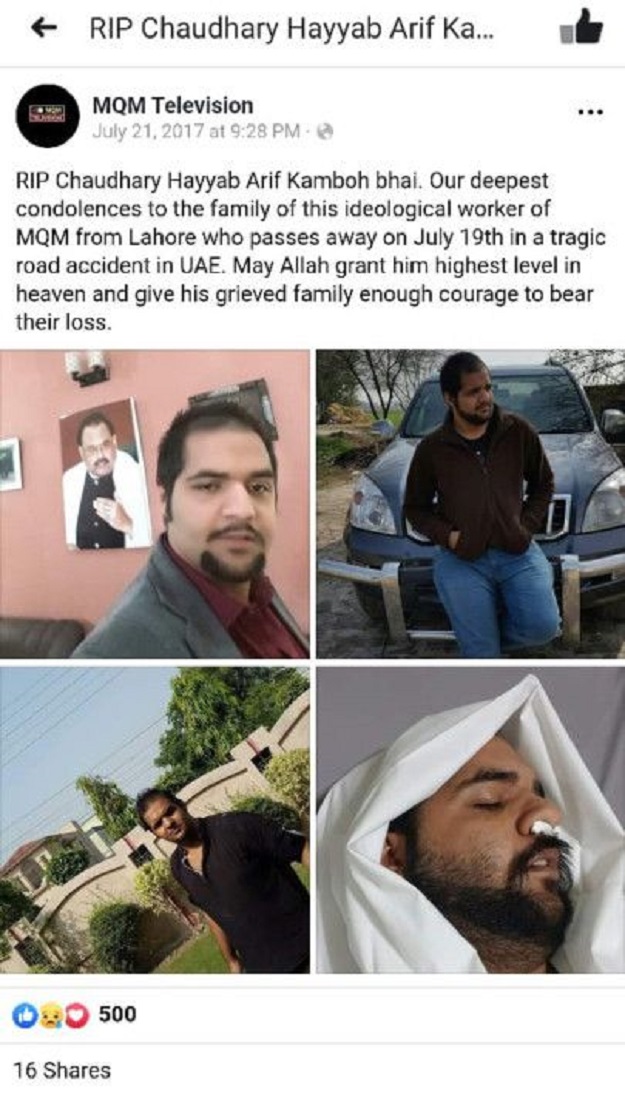 “RIP Chaudhary Hayyab Arif Kamboh bhai. Our deepest condolences to the family of this ideological worker of MQM from Lahore who passed away on July 19th in a tragic road accident in UAE,” MQM Television said in its official Facebook page on July 21, 2017.

“May Allah grant him highest level in heaven and give his grieved family enough courage to bear their loss,” added the social media post.

It was accompanied by a photo collage of the deceased. One picture showed Hayyab’s ‘dead’ body wrapped in a white burial shroud.

A Facebook post by his younger brother Mian Zaryab, 20, also followed talking about his struggle to deal with the ‘loss’.

“Travelling to Bahrain for a project… Initiative of this project was taken by my elder brother Chaudhary Arif Hayyab Kamboh. I’m missing him a lot today because today I have to handle all of these things on my own… after his death I feel alone in my life…” Zaryab wrote on August 7, 2017. 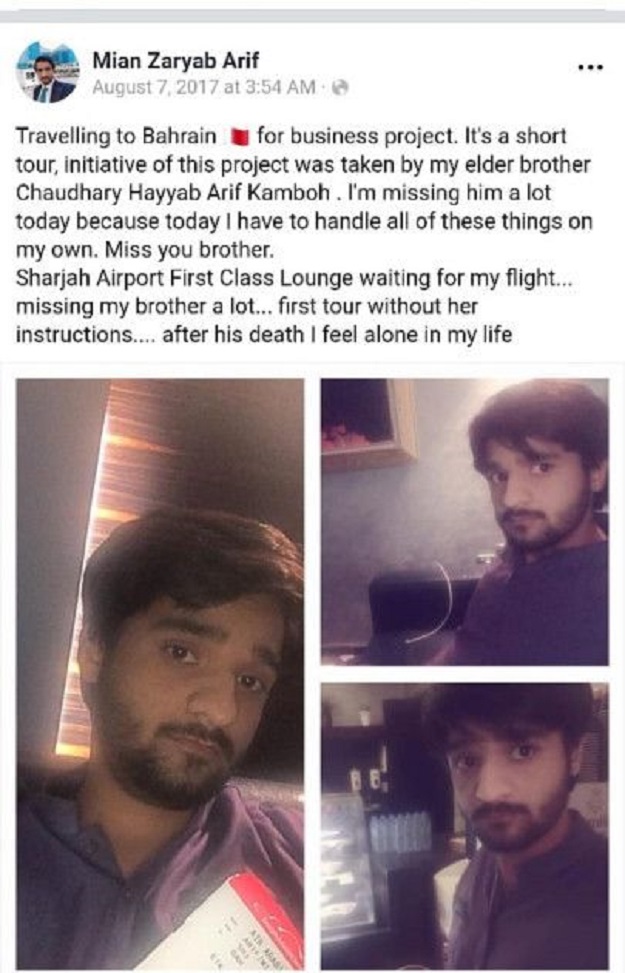 Both posts elicited an outpouring of grief with scores paying tributes to him.

Back from the dead

Hayyab, however, is far from dead. He is alive and kicking.

In fact, if those who dealt with him are to be believed, he’s currently busy making a killing by scamming overseas companies. 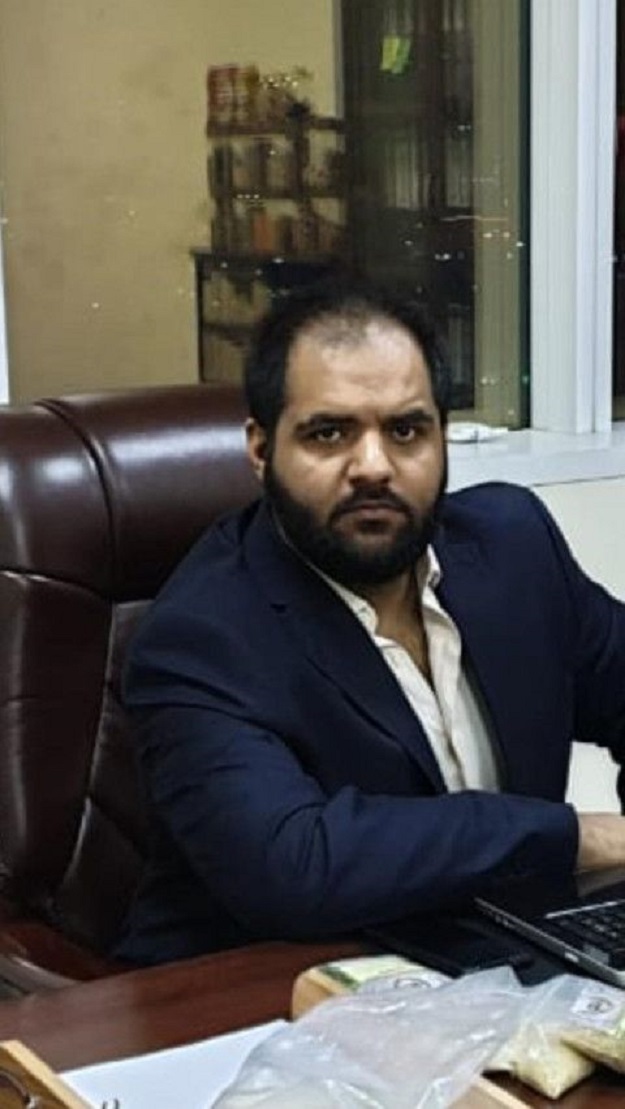 In recent weeks, several Indian and Indonesian exporters have contacted Gulf News detailing how they were duped out of millions of dirhams worth of fruits, vegetables and grains by H&MZ Global Worldwide, a foodstuff trading company launched by Hayyab in Ajman almost 14 months after his purported death. 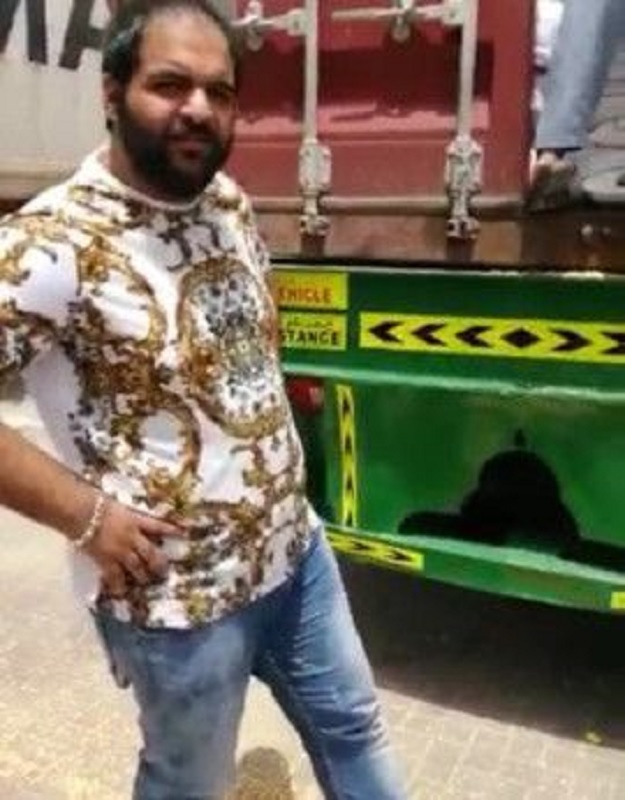 None of them has been paid. Exporters said they were tricked into shipping tonnes of food material to H&MZ by its owner Hayyab after being promised payment within 24 hours of delivery.

It’s not that the exporters didn’t do any due diligence. Some like Mumbai-based Vijay Ruparen, who supplied dried red chillies worth Dh130,000, even flew to the UAE last month to verify the antecedents of the company.

“Hayyab Arif sent his manager with a bouquet of roses to pick me from the airport. He drove me to Ajman and put me up in a fancy hotel… I was impressed.

The following day, I met Hayyab Arif at his office. There was nothing remotely to suggest all of this was a charade,” he recalled.

“Secure in the belief that I was dealing with a reputed company, I handed the bill of lading to Hayyab Arif which enabled him to release the shipment from Jebel Ali Port. He promised to pay the same evening. That day never came. I spent days chasing him but he refused to see me or respond to my calls,” added Ruparen who returned to Ajman recently and apprised the police about the case.

A similar experience was recounted by Akshay Laljibhai from Bhavnanagar in Gujarat who supplied two containers of red onions worth nearly Dh65,000.

“He treated me like royalty but once he got the shipment he discarded me like a used teabag. When I ask for my payment, he mocks me,” said Laljibhai, sharing profanity-laced WhatsApp voice messages where Hayyab can be heard ridiculing, abusing and even intimidating him.

“Yes, I scam people … this is my business … A bigger crook than me is yet to be born. I cherry-pick my victims and prey on greedy dogs like you. This is what I do for a living. You were a fool to fall for me,” he’s heard telling Laljibhai in the audio.

He also says that he doesn’t even remember how many cases he has against him in Pakistan. “Why do you think I don’t go back there?”

Gulf News was unable to verify the authenticity of the messages although Hayyab himself told the media outlet’s journalist that the voice in the audio is indeed his.

He claimed that he did not fake his death and has no clue why MQM posted an obituary about him.

But what about the picture of him lying dead?

“That’s from my theatre days in Pakistan where I played a dead man in a stage show,” he said, declining to reveal the name of the play or when it was staged. “It’s my personal matter,” he said.

If this were the case then why has his younger brother posted the fake news about this death on his Facebook page?

Hayyab could not provide any evidence to prove if he or his brother contacted MQM or Facebook in this regard.

He denied allegations that he has cheated exporters. He said all of them were lying and that he did not pay them as the foodstuff, veggies and fruits supplied by each one of them were of poor quality.

“I have documents to prove it,” he said.

When asked why he has stopped taking calls of exporters, Hayyab said that he has lost his cellphone and could not get a replacement SIM card as there’s an outstanding bill against it. “It’s my personal matter why I don’t want to clear my dues and get a replacement SIM,” he said responding to a call made by Gulf News on his new cellphone number.

Companies which dispatched goods to Soha Arif Foodstuff said they have been similarly duped. Best Zest Agro which supplied coconuts, pegged its losses at $97,412 while Shri Siddhivinyayak reported losing rice valued at $93,000.

Exporters said their efforts to lodge a police complaint have drawn a blank as the authorities have directed them to the courts.

“It’s not feasible to pursue a court case from abroad. If losing money to a scam is not bad enough, we have to now front high legal costs to fight a protracted legal battle,” said one of them.

So far, only Sharjah-based 10X has approached courts. It supplied onions worth $110,000 to Soha Arif Foodstuff.

“It’s a conspiracy against me,” he said.

However, that doesn’t seem to be the case as the email printed on the H&MZ card alongside his name is the same he gave while registering the domain name of Soha Arif Foodstuff.

Despite persistent questioning, Zaryab refused to confirm or deny if he’s related to Hayyab. For most questions, his standard response was no different than his elder brother. “It’s my personal matter.”

This is the second time in recent months when exporters have been hit by a multi-million dollar trading scam. In July, Gulf News reported how over 20 exporters were left devastated after losing 6,000 tonnes of rice worth Dh15.3 million to Dubai-based Al Rawnaq Al Thahbhi whose owner has since run away.