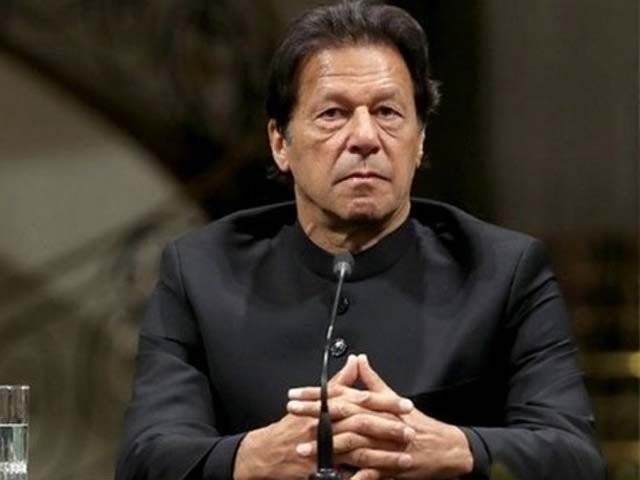 ISLAMABAD: Prime Minister Imran Khan said on Wednesday he would not give in to the opposition’s demand for his resignation, stressing that there was no bar on the media interview of Jamiat Ulema-e-Islam-Fazl (JUI-F) chief Maulana Fazlur Rehman.

In a meeting with senior journalists and anchorpersons, he said talks with Fazl were ongoing but the opposition did not seem serious in the negotiations. “I have given the mandate to the [government’s] negotiation committee that we are ready if the opposition wants to engage in peaceful protests,” he said.

When asked about the opposition’s demand for his resignation, the prime minister categorically said that he would not resign under any circumstances. Asked further about the future strategy if the talks remained inconclusive, he emphasised that “any future strategy will be contemplated later if the negotiations fail”.

Imran maintained that he was not aware of any sort of restrictions on the media coverage of Fazl. “On behalf of my government, I make it clear that anyone can conduct interview with Maulana Fazlur Rehman freely,” the prime minister said.

Commenting on the current political situation, the prime minister said that it appeared that everything was being done as part of a well-thought-out plan. “It is not clear, what does the opposition want? They are only calling for bringing the government down,” he said.

“We have been through this process. It took us a whole year to approach the tribunal, the parliament and the Supreme Court. All political parties at that time had maintained that the elections were rigged. All we wanted was to reopen [votes in] four constituencies,” he continued.

“Doing so would not have derailed the government, still our demands were not met. After which, we came out in the streets. We approached all relevant forums before the protest. Maulana Fazl should tell us which forums has he approached”.

The prime minister said that both the big opposition parties have their own agendas and it appeared that the JUI-F chief had been promised support from outside, which “is evident from the coverage of these things on the Indian media”. He questioned the timing of the protest. “Is this the right time for protest…” amid great troubles”, he said.

“The only issue with the opposition is that they want an NRO,” he said, referring to the National Reconciliation Ordinance promulgated by former military ruler Pervez Musharraf more than a decade ago. “These people call for a minus-Imran set-up,” he said, adding: “I pray that my government ends if I offer them any deal.”

The prime minister spoke at length about the Kashmir issue, saying that a key phase in the Kashmiris’ struggle was around. He stressed that the issue would not have gained such a momentum had the government not raised the matter on such a high level.

“[Indian Prime Minister Narendra] Modi had assumed that Pakistan would be silenced after a couple of strong statements but we raised the issue with such intensity that we are seeing that the matter is also being contemplated by the US Congress,” he said.

“There is fear that an incident similar to Pulwama attack might recur, or India might attack Azad Kashmir,” the prime minister warned. “The only agenda the Modi government has for Kashmir is to subject the unarmed Kashmiris to atrocities. Indian deployment of 900,000 soldiers in Kashmir is a sign of terrorism,” he said.

“It appears that its army has been directed to remain prepared for any military action, which may also signify a threat to Azad Kashmir,” he warned. He made it clear that Pakistan would not be the first to initiate any military strike, however, “our support for Kashmiris will continue”.

Speaking about the government’s efforts for highlighting the Kashmir issue, the prime minister recalled that earlier, the world used to listen to the woes of Kashmiris but did not maintain any strong position. “Not even the Muslim countries were showing any strong reaction to Indian atrocities back then,” he said.

“These are the efforts of the [Pakistan Tehreek-e-Insaf (PTI)] government that the issue of Kashmir has gained such a limelight and this should not be taken as a small achievement. It is due to our efforts that US Congress discussed the issue in its proceedings,” he said.

“I also apprised the US president [Donald Trump] of the situation in Kashmir because he was not familiar with the dispute in much detail. He used to believe that the matter just reflected a conflict between Hindus and Muslims,” the prime minister continued. “Trump told me that US had the policy of not opposing India.”

But now, Imran said, the US media is highlighting “our stance”. He mentioned that some elements opposed the publication of his article on the Kashmir issue “but then I personally talked to New York Times editor and requested him to conduct research on the RSS [Rashtriya Swayamsevak Sangh]”.

Imran announced that a media centre would be set up to further the Kashmir cause. “The media house will make documentaries on the Kashmir issue, while highlighting various aspects of the problem. The Kashmiri people are looking for support from Pakistan. The matter has reached a point like never before.”

Turning to the economy and price hike in the country, the prime minister said that Pakistan would have witnessed even worse price-hike had the government not taken remedial steps. “Had the three friendly countries not come to our rescue, Pakistan would have been labelled as defaulter,” he said.

When the government took over, he said, “we had to repay debt instalments of $10 billion. It was [only] possible if the rupee was depreciated much more than the present level. I had said on the very first day that Pakistan would see difficult times. But now the situation is moving in a positive direction”.

Imran said that no government in the past had met with such “circumstances, media criticism and the opposition as we have today”. He urged the media to expose anyone who worked against the country but “it must also appreciate the good work of the government”.

“Those extravagant tours were made when the country was reeling under the debt. We on the other hand are running the country in a different manner. I do not hold a camp office, while my household expenditures are borne by me.”

Imran hailed the Kartarpur Corridor as a project that raised the respect for Pakistan world-wide. “This project is of immense importance for the Sikh pilgrims and will also contribute to [the promotion of] our tourism sector,” he added.

When his comments were sought on the probable reshuffle in the federal cabinet, Imran said that the matter was under consideration but no final decision had been taken. Responding to another question, he said that the government had built a relationship of trust with the military leadership. Pakistan has a great opportunity as the military stands side by side by the civilian government and “it is for this reason that our foreign policy has improved.”

On the tensions between Saudi Arabia and Iran, Imran emphasised that the deterioration of the situation could prove to be a big nightmare for Pakistan. Therefore, the government is trying to resolve the matter through arbitration.

“Israel wants to see the two countries go to war. On the other side, we are trying that the foreign ministers of Saudi Arabia and Iran arrive here in Pakistan for dialogue. Our efforts have been met with a positive response,” he added.