Don’t be surpri­sed if the quinte­ssenti­ally desi scarf slides back into your best friend’s wardro­be or it alread­y...
By Ibriz Sheikh
Published: October 23, 2019
Tweet Email 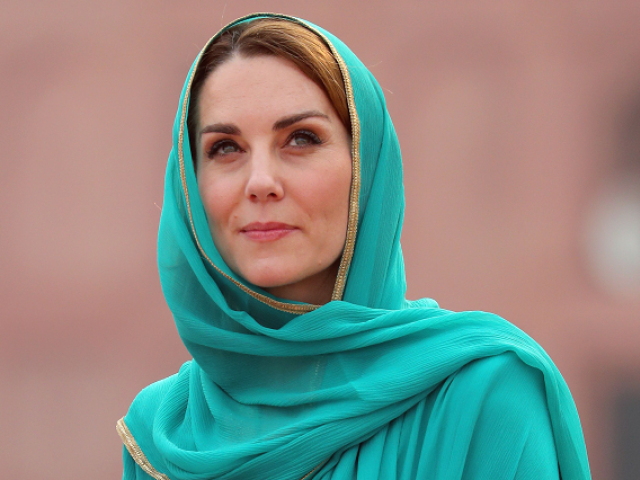 Last week’s visit by the Duke and Duchess of Cambridge marked the first Royal tour of Pakistan in 13 years, termed by many as their “most complex” one. It led to several memes (’cause we are so good at them!), debates about our colonial hangover and of course, some great photo-ops.

During the five-day-visit, Prince William and Kate Middleton met with Prime Minister Imran Khan, visited local schools, played cricket, spent time with cancer patients and visited the many heritage sights in the country. That’s the most interesting test cricket can ever get. 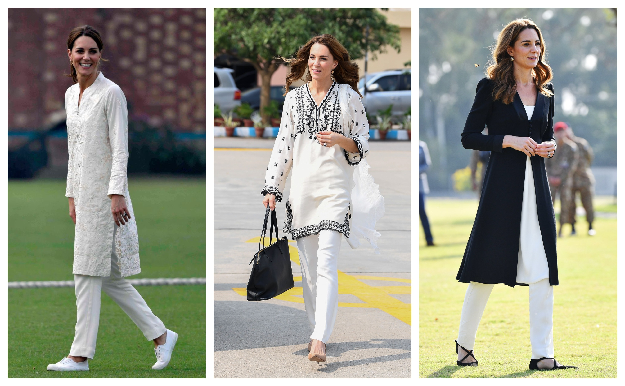 Jokes aside, the Royal couple did have a jam-packed schedule and that meant more than ample opportunities to make style statements. Eyes were peeled from the moment Kate and William set foot on Pakistani turf, as an army of cameras followed them around non-stop.

The Duchess made some rather elegant and apt fashion choices, perfectly suited not just for Royalty but as a means of cultural diplomacy. Instagram is still going ga-ga over her sartorial choices and rightly so, for she quite profoundly paid homage to the Pakistan’s national dress. The princess oozed confidence and grace, one outfit after another. And the best part was that she added her own variations to each ensemble. 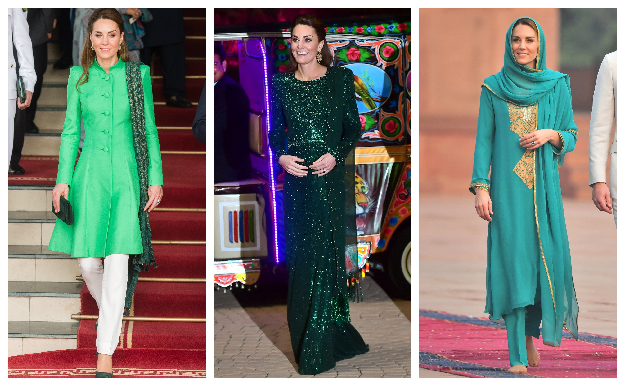 It was evident from the get-go that much planning went into strategically executing the Duchess’s wardrobe. From her Catherine Walker tunic to the Maheen Khan pieces, along with garments from other local brands, Kate has most certainly brought Pakistani fashion under the spotlight on the global runway.

She also set the tone for one particular piece of cloth which had slowly wrinkled back into our storerooms, away from the taste-maker’s everyday choices: the dupatta. Kate sported it with a number of her ensembles, which not only served as a mark of acknowledgment of the local culture but also completed the once three-piece, shalwar kameez.

Kate sported a royal blue, silk, periwinkle shalwar kameez by the notable Maheen, which featured white embroidery along the neckline and resonated with delicate lacework.

The outfit was paired with matching straight pants and a chiffon dupatta draped over the shoulder, rounded off with a pair of nude suede pumps and signature, minimal hair and makeup.

With such a holistic and impressionable dupatta debut, the princess not only channeled her late mother-in-law Princess Diana’s style seamlessly but also brought Pakistani women and men on the same page; damn, she looked oh-so-graceful!

We next saw Kate showcasing a unique variety that combined both British and Pakistani aesthetics. She stayed true to her native style with a green Catherine Walker coat dress, pairing it with straight pants by Maheen and a crushed chiffon dupatta by Bonanza Satrangi.

Paying close attention to the tunic, some would say it was a gentle nod to the traditional sherwani sported by Pakistani men. The dupatta once again added a much-needed oomph.

The trip to Lahore’s iconic Badshahi Masjid saw the Duchess display the true essence of the dupatta: a traditional head covering.

Once again, this was a Maheen Khan outfit, with a green French chiffon kameez and pants featuring a Swati mustard embroidered motif. The border on the dupatta had the same mustard colour. It not only gave her overall demeanor a devotional spin but also proved the desi scarf to be less of an added weight and more of an aesthetic accessory.

The grand reception hosted on the first night after the couple’s arrival saw Kate in an embellished bottle green Jenny Packham number featuring a dupatta with scalloped detailing and beaded tassels. The designer is one of the Duchess’s go-to couturiers and she made sure to incorporate a traditional aspect into the look,  thereby creating a glamourous gown which resembled the traditional anarkali design.

Browsing these looks sported by Kate during the Royal visit, we can certainly say that she put her best foot forward and ticked all the sartorial boxes. Through her choice of outfits, she truly highlighted Pakistani fashion whilst keeping up with her family’s tradition of getting local fashion spot on.

As far as the fate of the dupatta is concerned, a known Pakistan playwright once said that the women we write drama serials for are waiting for a Mr Darcy to come to rescue them from their terrible lives. For the audience that finds such content low-brow and trash, perhaps a real-life princess was needed to make the dupatta hip again.

So don’t be surprised if the quintessentially desi garment slides back into your best friend’s wardrobe or if it already has. That’s the royal statement of the day and is most likely here to stay, unlike the Royalty.