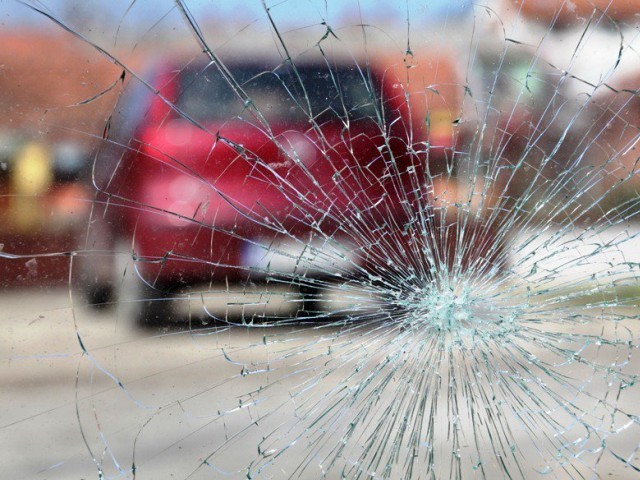 BHAKKAR: Nine people, Bhakkar residents were killed in a tragic road accident on Monday. The unfortunate ambulance was heading towards Rawalpindi with a patient and her family. It collided with a near Mianwali and this caused a gas cylinder to explode.

The collision led to the burning of all nine people on board. However, two of the bodies were yet to identified. Eight of the victims were members of the same family, while the driver was identified as Ghulam Hussain.

Rescue 1122 immediately arrived at the scene and took the severely burned bodies by cutting the ambulance. The victims were taken to the local DHQ hospital for a further identification process.

The tragic deaths of the eight family members shook the heirs and close relatives. The eyes of Bhakkar’s residents were filled with tears and sorrow.

Initial findings suggested that the ambulance was hit by a trawler, causing an explosion of the gas cylinder which set the ambulance ablaze. The deceased were trapped inside and unable to save themselves.

Locals of Bhakkar were in a state of deep sorrow when visiting the family to console the relatives of the deceased. Gul Mohammad, a family’s heir, expressed his grief by saying that his loved ones had gone and now he had nothing left.

He mourned that was he at a loss for words to show his agony.  When the eight funerals of the same family were taken out from the same house, all present, including close relatives and locals, could not hold themselves and continued to scream and mourn. A large number of people attended the funeral amid heart-wrenching scenes. The deceased are the residents of District Bhakkar and lived in a suburb of Alif- Siyal Nasheb.

It was reported that the trawler driver escaped immediately after the accident. Kandian police have registered a case under section 322 against the unidentified trawler driver. The news of the tragic death of nine people spread like wildfire across the area, but there was no political statement or government reaction to the tragedy.

Chief Executive Officer District Health Authority Dr Pervez Iqbal has said that the body boxes for the victims of the ambulance trawler accident were provided with funds from the health council to deliver them to their homes. The ambulances for the same purpose have been provided by Rescue 1122.

Iqbal added there was no authenticity in the news of taking money. He said that Bhakkar Deputy Commissioner Dr Nasir Mahmood Bashir visited the district headquarters early in the morning and presented condolences to the family’s heirs.

He also directed to manage the ambulances to deliver dead bodies at their homes. Hospital administration arranged all the things on an immediate basis and matters have been carried out under the supervision of CEO Health and other health officers

DSP Headquarters Mianwali Saeedullah Khan Niazi told the Daily Tribune that the road accident is very tragic, the sorrow of the deaths of nine people could not be stated in words. Police teams have been set up to arrest the trawler driver and soon he will be in the custody of the police. Police are taking all measures to arrest the culprit and a case has been registered against the accused trawler driver.

Bodies have been shifted from Mianwali to Bhakkar under the police supervision team and I am also among them, funerals were also attended by police officers.

Meanwhile, Punjab Chief Minister Usman Buzdar on Monday expressed a deep sense of grief over the loss of lives in a road accident near Mianwali and extended sympathies to the bereaved families. He sought a report from the administration with the direction to take action against those responsible for negligence by identifying the reasons for the accident.