As I look at the Lahore Scienc­e Mela, the glass is filled somewh­ere in the middle­
By Muhammad Hamid Zaman
Published: October 22, 2019
Tweet Email 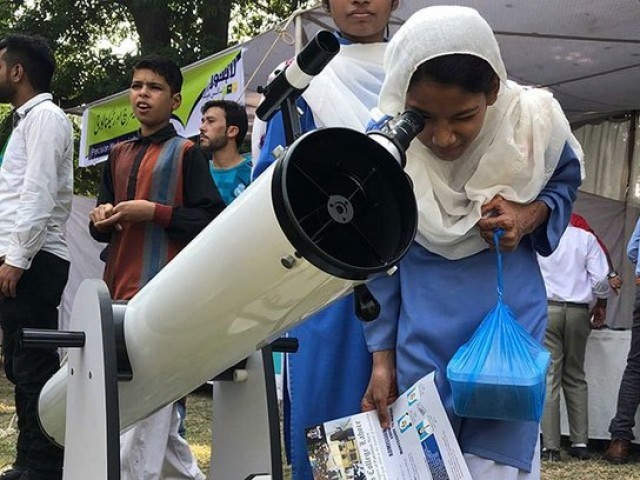 On a crisp weekend in October, nearly 25,000 people visited an event in Lahore that went largely unreported in the media. Of course, it was not going to get the wall-to-wall coverage of which designer clothes the Duchess of Cambridge decided to wear the week after the event in Lahore. (This, of course, is beside the point that the Duchess was reduced to just fashion). But the tragedy is that few among colleagues in the media who get all emotional and teary-eyed about yet another literature festival or tweet endlessly about the latest food festival bothered to care about this particular event. For those who have no idea what I am talking about — the Lahore Science Mela took place on October 12th and 13th.

The Lahore Science Mela — a one of its kind festival of curiosity, thought and public engagement in science — brought together student groups from every district in Punjab and some from as far as Sindh. The organisers planned the event for nearly a year, and in their typical unassuming way delivered something bigger and better than before. The exhibits included immersive experiences and hands-on activities from not just the institutions in the country, but also from CERN.

I had the pleasure of working with the leadership team (led by Dr Sabieh Anwar) and the incredible group of volunteers to organise the first two events. To work with them is an honour of the highest proportions. These men and women are dedicated, driven and dynamic. They care about the present and the future and create an environment that was truly inclusive. Those visiting the Mela where students from all socio-economic groups. They included elite private schools and schools struggling with even the most basic commodities. The atmosphere at the Mela was above partisan hostilities and focused on knowledge, curiosity and the mission to innovate. There was a sense of authenticity in the Mela that makes science both inspiring and accessible to all, regardless of their means. This is exactly the message we ought to share and celebrate.

There is, however, a dark side as well. Not with the Mela but with our ownership of science, innovation, and curiosity. The lack of media attention is a troubling aspect of what our priorities are. There are others as well. Support from the public and private sector is severely lacking. The Mela was almost exclusively supported by Syed Babar Ali, who financed the first two iterations in 2017 and 2018 as well. Despite the tireless efforts of the organisers, there is little appetite in the public sector to support the effort. Foundations, private companies, and individuals seem equally uninterested. No one would deny the value of science, or disagree with the premise of creating an open, free and accessible science engagement event — but the rhetoric fails to translate into action. Limited support means the Mela cannot be scaled further and is unable to employ brilliant youngsters and harness their ideas because they need to support themselves and their families. They don’t have the luxury of not working and not earning. Students in other parts of the country, who are eager to come and don’t have the financial means, also need support for travel and housing in Lahore.

As I look at the Lahore Science Mela, the glass is filled somewhere in the middle. It is both half full and half empty. Half-full because it confirms the belief that there are incredible talent and curiosity among our youth and an insatiable appetite for knowledge. Half-empty because our priorities, as a society, are not supporting our youth’s engagement with knowledge. We can either fill up the rest of the glass or do nothing and watch it completely drain out.