PML-N’s Ahsan Iqbal says countr­y will only move forwar­d when judici­ary is free
By Our Correspondent
Published: October 21, 2019
Tweet Email 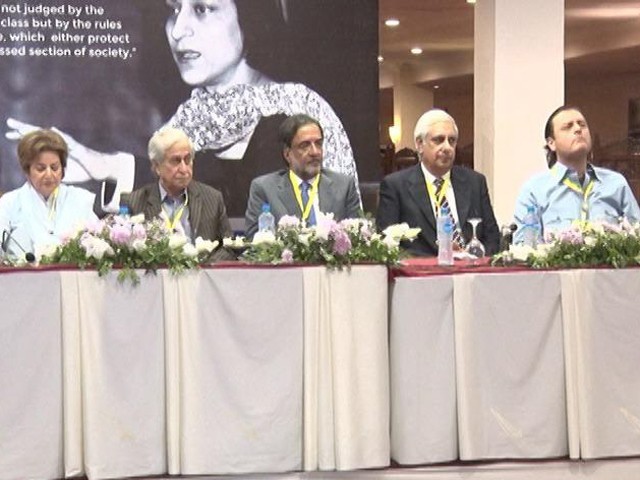 LAHORE: The Pakistan Muslim League-Nawaz (PML-N) and the Pakistan Peoples Party (PPP) leaders said they have to decide whether the country should be run according to the Constitution or not, allaying concerns that protest for democratic rights has been suppressed.

Addressing the Asma Jahangir Conference on Sunday, PML-N Secretary General Ahsan Iqbal said, “The 20th century concept of national security has changed now. The country will only move forward when our judiciary is free.”

Ahsan said, “Until the government team is not serious, negotiations on Azadi march will not be held.”

PML-N spokesperson Marriyum Aurangzeb urged the people to unite for a democratic Pakistan, saying “political and democratic revolution has ended” and needed revival.

“There has to be a Charter of Democracy part two in which not only specific departments but judiciary, political parties and others should be included,” the former information minister added.

“Our government, instead of suppressing the sit-in, protected it, but today the protest is being suppressed as the incumbent government wants to shelf the parliamentary system,” said the former PM.

Former foreign minister Khurshid Mahmud Kasuri said, “We have twisted and broken the dream of Jinnah [Quaid-e-Azam]. In school, we were taught the principles of Jinnah – Unity, Faith and Discipline.”

He regretted forgetting those golden principles.

PML-N leader Shaista Pervaiz said, “Everyone should remain within their limits and work. Politicians are the biggest targets of accountability.”

PPP leader Chaudhry Manzoor said late Asma Jahangir talked about the security of masses therefore “we are celebrating her day”.

Barrister Ali Zafar said, “Constitution and law should be above all.”

Terming inaction a crime, he said it paved the way for extremists.

Renowned lawyer Ali Ahmed Kurd said, “Today, it is the duty of civil society not to keep silent. We don’t want to be included among those unfortunate people who do not have anything worthwhile to tell their children.”

He said, “It is our duty to ask why the nation was not built.”

He said no one gifted this crippled democracy. “This is because of the political workers who have been incarcerated. I have spent seven years of my life in the jails of the country. It is my right to ask the rulers about the condition of the country.”

He said former chief justice of Pakistan Mian Saqib Nisar “ruined the country” and everyone remained quiet, “but not Ali Kurd”, adding that if the former CJP came to Mall Road, no one would even bother shaking hands with him.

In the conference, rich tributes were paid to Jahangir for her unparalleled services to the country.