The trio irked many with their selfie­s
By Entertainment Desk
Published: October 20, 2019
Tweet Email 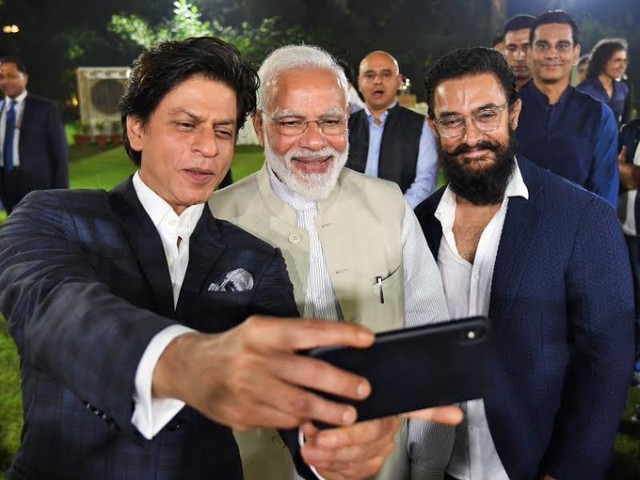 Indian Prime Minister Narendra Modi interacted with members of the film industry on Saturday in the Capital, and several of Bollywood’s top stars were present at the event.

The focus was on inviting the film industry to create films and television shows that popularise Mahatma Gandhi and Gandhism, to mark the 150th birth anniversary of the Father of the Nation.

#changewithin 150 years and his ideas will remain engraved for a lifetime. Celebrate the Mahatma, the unity he stood for and the world he saw for us! Watch the video by clicking the link in my bio #ChangeWithin @RHFilmsOfficial

“Gandhi is synonymous with simplicity. His thoughts reverberate far and wide. The power of creativity is immense, and it is essential to harness this spirit of creativity for our nation. Several people from the world of films and television have been doing great work when it comes to popularising the ideals of Mahatma Gandhi,” Modi said during his address.

Our film and entertainment industry is diverse and vibrant.

Its impact internationally is also immense.

Our films, music and dance have become very good ways of connecting people as well as societies.

Here are more pictures from the interaction today. pic.twitter.com/711sKni29l

“I would like to thank the Prime Minister for bringing us all together, that too for a cause such as this. I feel we need to re-introduce Gandhi ji to India and the world. The film industry can get self-obsessed and it is important we create work that is not only about business,” said Shah Rukh, about the need of the industry to come forward and make films on Gandhi that can help in the nation-building process.

Thank u @narendramodi for hosting us & having such an open discussion on #ChangeWithin & the role artistes can play in spreading awareness of the msgs of The Mahatma. Also the idea of a University of Cinema is extremely opportune! pic.twitter.com/kWRbNk3xzo

Few pictures from the event started circulating social media and many slammed the actors for blindly feeding the premier’s lies.

I have scoffed at, condescended to, and lectured people for so much as uttering a word about Bollywood. It is low art. It is an assault on one's intelligence and refinement.

It is also a vehicle for India's colonial project in Kashmir, its rabid jingoism, and Hindutva fascism. pic.twitter.com/BDTzokNDGs

you can search through the entirety of Bollywood and still not find a single spine https://t.co/9KadrgWYY5

Which Mahatma? 'Father of the Country' Modi? https://t.co/dlWQWrFjIO

I knew SRK was a sellout but seeing Aamir Khan here as well broke my heart in half. https://t.co/9u0RwsVEM1

The same SRK and Aamir Khan who were abused and asked to go to Pakistan not too long ago have now become 'the pride of India' for the RW.

Veer should’ve been locked up in a Pakistani jail forever tbh https://t.co/7MqElclyu6

But last heard, Aamir Khan had security concerns living in India, no? What changed? https://t.co/hZWicGb6kS

‘Durj’, ‘Kaaf Kangana’ to clash at the box-office