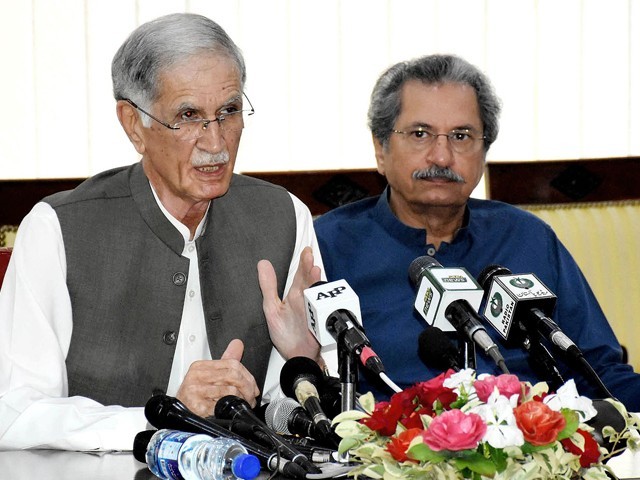 ISLAMABAD: The government on Saturday said the opposition parties’ refusal to come to the negotiating table on the Jamiat Ulema-e-Islam-Fazl’s (JUI-F) ‘Azadi march’ meant that they were working on an anti-Kashmir agenda and the state will enforce its writ allowing the “law to take its course” if they went ahead with the rally.

“The prime minister [Imran Khan] will not resign under any circumstances,” Defence Minister Pervez Khattak, the head of the government committee formed to hold talks with the opposition parties, said at a news conference, accompanied by Education Minister Shaqat Mehmood, who is also a member of the body.

“It’s impossible to accept the opposition parties’ demand [for the prime minister’s resignation] and they only want to intimidate the government, but we will take action they stick to their stance,” he added.

JUI-F chief Maulana Fazlur Rehman has refused to call off his October 31 anti-government march, backed by the Pakistan Muslim League-Nawaz (PML-N) and the Pakistan Peoples Party (PPP), until the prime minister’s resignation.

Reiterating the government’s offer to hold talks with the opposition parties, Khattak said the prime minister had formed the negotiating committee with goodwill.

“We have included the National Assembly speaker [Asad Qaiser] and the Punjab Assembly speaker [Pervaiz Elahi] in the negotiating committee. The opposition parties should sit down with us and speak to us about their demands, which will be examined.”

The minister said the government was serious about addressing the opposition’s issues. “If they have any evidence of rigging [in the 2018 general elections], they can present it to the parliamentary committee formed for this purpose,” he proposed.

However, Khattak maintained that the government’s offer should not be considered its weakness.

“There’s no threat to the government, but it is the country we are worried about. The opposition’s protest will be detrimental to the country,” he added.

“We are willing to walk up to the opposition if we have to for the country’s sake. This is a democracy and issued should be resolved through talks. We have seen protests throughout our lives. Even the PTI [Pakistan Tehreek-e-Insaf] was holding talks inside the container during its sit-in [in 2014].”

Khattak warned that there could be chaos in the country if the opposition remained stubborn and refused to opt for dialogue.

“The opposition will be responsible for that,” he said, adding that the government would then be forced to enforce its writ. “It’s not just the Pakistan Tehreek-e-Insaf [PTI] that will come into action to stop the protest but the entire state machinery.”

The minister said the government would make the necessary decisions to ensure that there was no deadlock. “The government does not only mean Prime Minister Imran Khan but the entire state. If somebody wants to derail the system, they will be responded to in the same manner.”

When a journalist pointed out that the minister’s tone sounded threatening instead of being reconciliatory, Khattak responded that he merely stated that the “law will take its course”.

The minister also claimed that the negotiating committee was in touch with senior leaders of all political parties and had received a “good response”.

Speaking on the occasion, Mehmood said he had seen videos in which the JUI-F chief was verbally attacking state institutions responsible for national security.

“My suggestion to Maulana is to avoid delivering such statements,” he added.

The education minister further said he was concerned that madrassah students would be used in the JUI-F’s long march. “We don’t want the education of children to be affected by the protest. It is our responsibility to protect all children of the country.”

On the JUI-F’s security wing Ansarul Islam, which was recently seen presenting a ‘guard of honour’ to Fazl in Peshawar, Mehmood said the National Action Plan (NAP) did not permit the existence of such ‘armed’ groups.