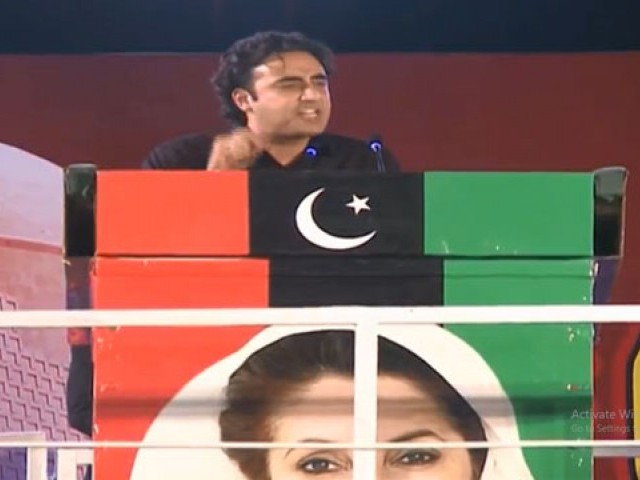 PPP chairman Bilawal Bhutto-Zardari has announced holding anti-government protests across the country to “restore ‘real’ democracy in the country”.

“Our demand is to restore democracy [in the country],” he said in his address at a party rally in Karachi held to mark 12th anniversary of the 2007 Karsaz bomb blasts. “We don’t accept this artificial democracy… the democratic and socio-economic rights of the masses shall be restored… and for that Imran Khan has to resign.”

The PPP chairman said the incumbent government had lost its credibility in the masses as it did not fulfil any of its promises.

He said all opposition parties had decided that the government must step down.

“Our anti-government movement has started from Karachi,” he said, as he announced his plan for further protests across the country.

He said the PPP will protest in Thar on October 23, demonstrate in Kashmore on 26th whereas rallies in Punjab will begin from November 1.

“We will tour the entire country and when we return from Kashmir, you [Imran Khan] will have to go…We will expose your incompetence in every nook and corner of the country.”

The PPP chairman said his party had always played a constructive role for the supremacy of Parliament but to no avail.

“Imran Khan neither has the capability nor seriousness to govern a country of 200 million people,” he said. “Parliament has been side-lined and politicians have taken to the streets.”

Bilawal alleged that the incumbent rulers had compromised on the issue of Kashmir.

“Even a blind person can see Kashmir has been sold out, and CPEC has been slowed down,” he said. “The incompetent government should be removed for committing these crimes.”

Recalling the deadly Karsaz incident, Bilawal said despite terror threats, thousands came to welcome their former premier Benazir Bhutto on October 18, 2007 and “177 sacrificed their lives to catch the glimpse of their leader.”

The PPP leader said the 2018 elections were massively rigged, and even banned outfits were allowed to contest the polls.

“We don’t want our institutions to be controversial but when army personnel are deployed inside polling stations, their credibility will be questioned,” he said.

He also spoke about the recent PS-11 by-poll in Larkana, where his party’s candidate, Jamil Soomro, lost to GDA’s Moazzam Ali Abbasi.

“Security personnel deployed inside polling stations harassed our voters and pressured them to vote against PPP,” Bilawal said, announcing that the results will be challenged.