Ross and Rachel are still on a break: Jennifer Aniston

Thanks to Nauman Arfeen, Prince William became the first British Royal to don a 'sherwani'

Prince William is officially the first British Royal to don a sherwani. The Duke of Cambridge sported a dark green version of the traditional Pakistani dress, given to him by local menswear brand Naushemian at a reception held in his honour on Tuesday.

Needless to say, Nauman Arfeen - the brains behind the brand - made sure his design looked fabulous on William. As his teal ensemble was infused with intricately embroidered collar and cuffs, paired with matching trousers, which made the Prince a sight to behold.

While Kate Middleton has remained in the highlights throughout the tour, there is no doubt that she also looked ethereal on the splendid night. The Duchess complemented her husband with a glistening emerald green dress by Jenny Packham, making yet another statement.

"The Prince has turned sherwanis into a global trend by donning mine and I can't help but quote a time in history when the British Royals made it a dress code for waiters in the subcontinent, to devalue the same outfit," Arfeen told the Express Tribune.

The designer continued to layout facts as he expressed how Naushemian ended up becoming the Prince's choice of label. "It was a proud moment for me when I was contacted by the Buckingham Palace to design a sherwani for Prince William. Since my label represents Pakistan at the Chelsea Asian store in London, along with several other Indian designers, William liked an ensemble I had designed and purchased it there. It was blue in colour and they called me to ask if I could attach green buttons to it." 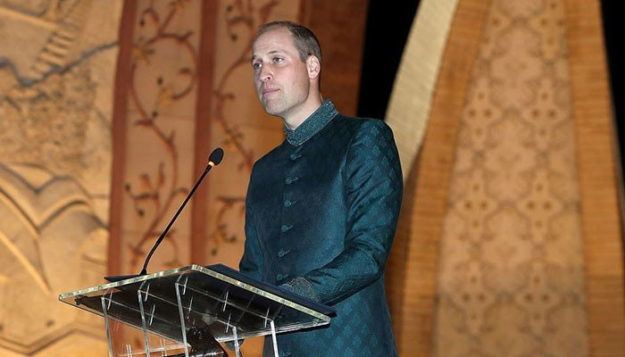 The Palace had also hired award-winning fashion designer Maheen Khan to design dresses for the Duchess. Arfeen did what had been asked of him. However, he added the green top that the Prince ended up wearing, knowing that blue and green would be an odd combination.

"I could tell they were looking for something green. However, they picked up the blue outfit because they loved it so much. So I figured I would send them an all-green ensemble along with the altered blue to see how that works. Turns out, they loved it even more!"

Arfeen also explained how William's team did a complete background check on him to make sure that he wore someone credible. "They looked into my previous work, my label, my shoots paying a tribute to the Sikhs which aroused quite a controversy, while I was only trying to make peace. In short, they checked everything!" he shared.

The designer expressed he is a patriot at heart and was overwhelmed when a person of William's stature wore his outfit, not just out of pride but also because he payed the sherwani its due respect. "No British Royal has ever worn a sherwani and the Prince has never been seen wearing anything other than a suit or a western outfit."

Arfeen added that people from across Europe are contacting him now to design similar sherwanis for them, reiterating how the desi style is turning into a global one.

"Naushemian is making sherwanis for the last 15 years. We manufacture our own jamawar and create handwoven fabric. Prince William's was one of them. It had tone-on-tone embroidery, back motif embellishments and fit him perfectly!"

Arfeen believes he has made his nation proud.