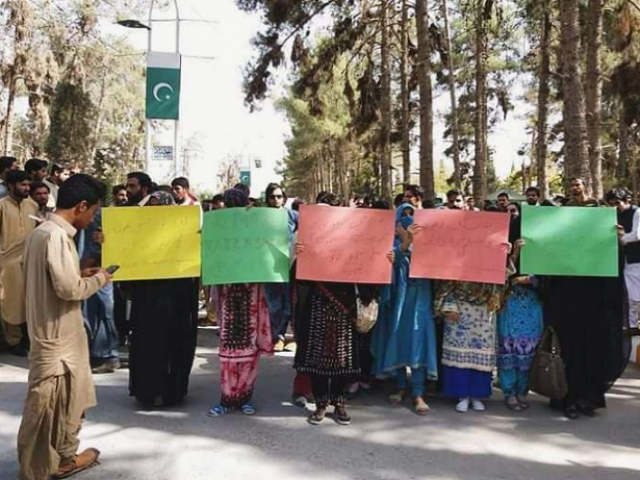 QUETTA: Various student organisations on Thursday staged a protest demonstration outside the Quetta Press Club against alleged harassment and blackmailing of students by some staff members of the University of Balochistan (UoB).

Organised under the banner of Students Educational Alliance, the leaders leading the protest said the UoB vice-chancellor was responsible for the entire scandal as, according to them, the VC was “head of the blackmailers and saviour of the culprits”.

Students also continued their protest at the UoB for the fourth consecutive day and marched through the campus to mount pressure on the authorities to punish the culprits.

A day earlier, the UoB’s Academic Staff Association had distanced itself from the scandal and pointed the finger at the university administration, including the VC.

Addressing a press conference at the Quetta Press Club on Wednesday, Professor Dr Kaleem Ullah Barech, representing the Academic Staff Association, had said their association had raised voice against varsity administration, including its financial and ethical corruption, for last several years

The FIA later discovered that male and female students were being blackmailed by some staff members through ‘objectionable’ videos of them, recorded through CCTV cameras hidden at various places on the campus including its washrooms.

Balochistan Governor Amanullah Khan Yasinzai, who is also chancellor of all provincial universities, on Thursday vowed to take strict action against criminals involved in harassing and blackmailing students.

“Whosoever found involved in demoralizing educational structure in Balochistan will be brought to justice because the UoB’s scandal has triggered anger in society,” the governor said.

He urged citizens and other students to show restraint because the provincial government and university administration would fulfill their legal responsibilities. “Student organisations and teacher associations should refrain from provoking the society until completion of the FIA probe,” he said.

“The hooligans who harassed and blackmailed students would be dealt with strictly and punished for maligning the mother educational institution of Balochistan,” said Yasinzai.

Balochistan National Party’s (BNP) Lashkari Raisani also condemned the scandal and asked the VC to resign and present himself for accountability. He said the scandal has shaken students’ trust in educational institutions.

The Higher Education Commission (HEC) has also taken notice of the scandal and has placed the issue on agenda of the vice-chancellors’ meeting to be held on October 21, said a press release.

“The meeting will discuss existing regulations that address such acts as well as additional measures that might be needed to make university campuses safe and secure places. The university heads will also discuss the funding issues of the higher learning institutions,” it said.

Meanwhile, Ombudsperson of Balochistan Sabir Khatoon told The Express Tribune that her office had issued a circular in July 2019, directing all provincial universities to constitute Anti-Harassment Special Committees to deal with such cases.

“According to the Anti-Harassment Act -2016, Special Anti-Harassment Committees must have to be constituted in every institution. No university other than the University of Khuzdar bothered to follow the directions and no special committee has been formed in any institution of the province,” she said.

Khatoon said now strict legal action will be taken against those university administrations which avoid following the direction already given from the provincial ombudsman office. “Anti-Harassment Act 2016 must have to be implemented according to its actual spirit,” she said.