JKLF calls off LoC sit-in after meeting with UN mission

JKLF calls off LoC sit-in after meeting with UN mission 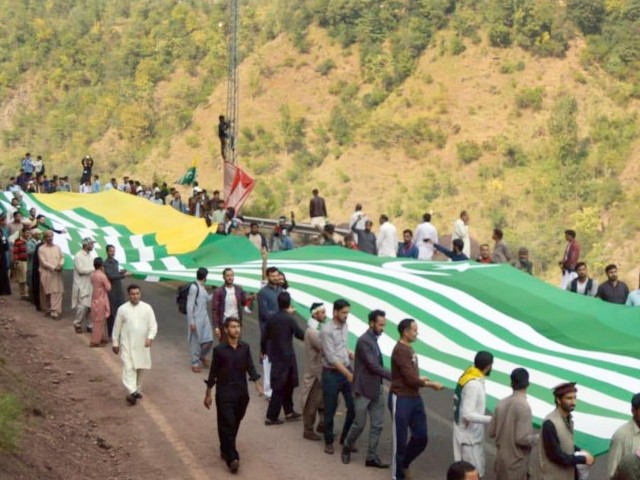 JKLF supporters hold AJK flag during their protest near Line of Control on Wednesday. PHOTO: ONLINE

MUZAFFARABAD: The Jammu and Kashmir Liberation Front (JKLF) agreed to call off their protest sit-in near the Line of Control (LoC) following a meeting with the United Nations Military Observer Group of India and Pakistan (UNMOGIP) on Wednesday.

Last week, AJK police had placed containers and deployed a large contingent of officers near Jaskool, eight kilometres from the LoC, to stop JKLF workers and supporters who wanted to cross the border to help Kashmiris facing Indian oppression.

The JKLF-led march had since come to a halt, and the marchers had been staging a sit-in under large tents erected on the main Muzaffarabad-Srinagar road.

Azad Jammu and Kashmir (AJK) Prime Minister Raja Farooq Haider and others reached Jaskool to persuade the nationalist protesters to end their hunger strike and protest. 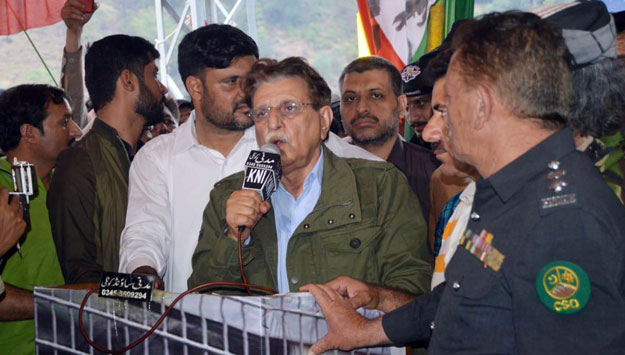 JKLF leaders had appealed to the AJK administration to remove the obstacles and let the marchers cross LoC.

The delegation led by AJK PM met UN observers in Muzaffarabad, and demanded an end to repression in IOK.

The delegation called upon the UN to send its fact-finding mission to occupied Kashmir, pressure India to restore the pre-August 5 status of IOK and resolve the Kashmir dispute keeping in view the wishes of the Kashmiri people.

Speaking on the occasion, the AJK premier said he would let UN Observers visit any part of AJK; however, India was reluctant to do so “in order to hide its atrocities”.

He said Kashmiris will continue to expose the real face of India to the world.

“India has created a humanitarian crisis in the occupied valley besides targeting civilians along the LoC. The UN must take serious notice of the situation and help Kashmiris realise their right to self-determination,” PM Haider said.

The AJK PM said Kashmiris did not want the LoC to exist.

“We respect the sentiments of the people of Jammu and Kashmir Liberation Front (JKLF) and thanked them for not crossing the LOC,” he said, adding, “It was painful for me to stop them; time will come when this bloody LoC will not be there.”

“We stopped JKLF people as a measure to protect precious lives from possible Indian firing from across the LoC, but time is not far when we all will cross it.”

Meanwhile, in an earlier meeting at the PM House with Haider, JKLF’s Dar demanded international media’s access to the occupied valley.

In pictures: Day 3 of royal couple’s sojourn to Pakistan