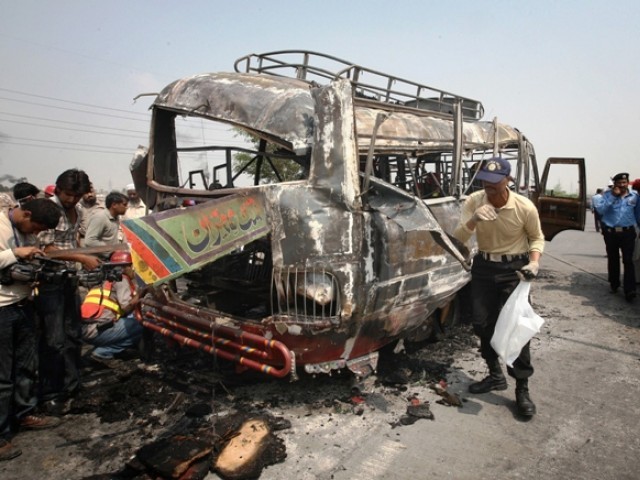 A Pakistani policeman inspects a burnt bus after the compressed natural gas (CNG) cylinders powering it exploded while it was on a highway on the outskirts of the capital Islamabad on July 12, 2011. PHOTO: AFP

Nine passengers were burnt beyond recognition when a bus carrying 15 passengers caught fire following an explosion on Tuesday afternoon on the Grand Trunk (GT) Road.

Going to Kalar Sayeddan from Rawalpindi, the passenger bus had a stop-over in front of Pakistan Town on the GT Road for dropping off passengers.

“The whole bus was engulfed in flames within a minute after the explosion caused by a gas leakage,” said Haroon Rehman, chief inspector of the Explosives Department who had come to the site to examine the bus and ascertain the cause of fire.

Malik Ehtisham, one of the passengers, was moments away from disembarking from the bus when it suddenly caught fire. Though critically injured, he was lucky enough to survive among four others. Eighteen-year-old Ehtisham a grade 10 student, was returning from school and was about to get off at the stop-over.

Only the driver, conductor of the van and a woman managed to escape unhurt. The five injured were shifted to the burn centre at the Pakistan Institute of Medical Sciences (Pims) hospital along with the deceased.

All four gas cylinders of the bus were intact and the police and explosives expert ruled out the possibility that there was another cylinder that had exploded. No traces of explosives were found.

“It was gas leakage. Had it been one of the gas cylinders the whole bus would have been completely destroyed,” said Rehman.

Explaining the cause of fire, he said there was a gas leakage from the gas pipes at certain points which caught fire due to a possible short circuit. The security valves automatically stopped working when the temperature rose, he added.

“Then the gas rushed out with immense pressure. It would not have given many passengers the time to even get out of their seats,” said Rehman.

The expert revealed that poor Compressed Natural Gas (CNG) system installed in the bus was responsible for the accident.

“Well-maintained gas systems do not leak like this”, he said.

Investigating the incident, police were on the trail to arrest the driver of the bus. The conductor, who was in police custody, told the authorities that at the time of the fire, there were about 15 to 17 people on the bus. Authorities said no eye-witnesses came up to provide any account of the incident.

Five of the nine dead – Ansar Mehmood, Tariq Mehmood, Abdul Saeed, Muhammd Razaq and Karim Din – had been identified till the filing of this report.

The remaining bodies have to be identified through DNA testing for which their families have started giving samples, officials in the hospital said. The injured included Haroon, Muhammad Ali, Muhammad Mumtaz and Kaneez. (With additional input from AFP)