Italy back among the elite with Euro 2020 berth

Italy back among the elite with Euro 2020 berth 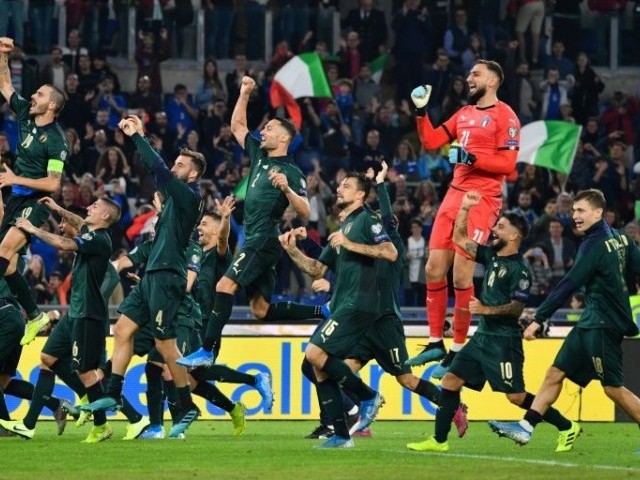 ROME: Italy punched their ticket to Euro 2020 with a 2-0 win over Greece in Rome on Saturday to turn the page on their failure to qualify for the last World Cup.

Decked out in green, a colour they had worn just once before at the Stadio Olimpico back in 1954, Roberto Mancini’s new-look Azzurri pushed their perfect run in Group J to seven games for a maximum 21 points.

Despite being pegged back by the Greeks for over an hour the Italians confirmed their dominance and are now assured of finishing top of the group.

Chelsea midfielder Jorginho slotted in a penalty after 63 minutes in the Italian capital with Juventus forward Federico Bernardeschi scoring the second goal on 78 minutes.

“I want to thank the fans at the Olimpico for supporting us, even in the first half when we were not brilliant, maybe a little nervous at being back in Rome,” said Mancini.

Italy are one of 12 host nations for Euro 2020 with the opening match to be staged at the Stadio Olimpico.

And Mancini said he hoped that four-time world champions Italy could relive the “magical nights” of the 1990 World Cup in Rome.

“We hope that they will return,” said Mancini, “and that in June it will be even more beautiful.”

Italy will play at least two of their pool matches in Rome next June.

Mancini has rebuilt Italy since their stunning failure to qualify for Russia 2018 and they reached Euro 2020 with a record three games to spare.

“I’m happy and proud to have helped this team get out of a complicated situation,” said the 54-year-old former Italy international.

“We’ve managed to create a team in a short space of time.

“It wasn’t easy but we have to thank the players who quickly adapted to each other.

“It’s a team with character, who play with pride, never give up and fight until the end, but who still need to improve.

“We have a lot of work, but we’re not far off the best European teams.”

The Azzurri had dominated early but were pinned back by the Greeks who had the best chance of the first half with Gianluigi Donnarumma superbly denying Dimitris Limnios.

Both Lorenzo Insigne and Nicolo Barella were off target with Italy losing Fiorentina forward Federico Chiesa to injury before the break to be replaced by Bernardeschi.

Ciro Immobile threatened twice after the break with Alexandros Paschalakis turning away the Lazio forward’s header.

But the Italians were awarded a penalty after Andreas Bouchalakis used his hand to block a goal-bound Insigne effort.

Jorginho stepped up to convert sending Paschalakis the wrong way to the delight of the 60,000 crowd in the capital.

It was the Chelsea player’s third goal for Italy, all from the spot.

Bernardeschi then struck from distance 12 minutes from time, his shot taking a hefty deflection to deceive Paschalakis and guarantee Mancini his eighth consecutive win as coach.

“We’ll go to the Euros, to put on a good show and to go all the way because it’s been a long time that the Euro is missing from the Italy trophy cabinet,” Mancini warned Friday.

Italy won their only European title back in 1968.

European champions in 2004, Greece are fifth in the six-team group with five points, and next play fourth-placed Bosnia and Herzegovina.

“They have overcome the crisis they went through.

“They can be a very dangerous outsider or even one of the favourites for the Euros.”