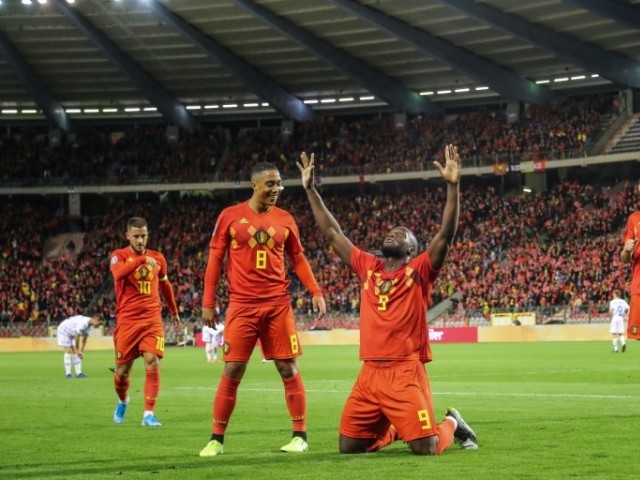 BRUSSELS: Belgium became the first team to qualify for the 2020 European Championship finals as Romelu Lukaku scored twice in a 9-0 thrashing of San Marino in Brussels on Thursday.

“(For our next games) the approach will be identical, we have the responsibility to maintain our standards,” said Spanish coach Martinez. “The next step is to finish first in the group.”

The world-number-one ranked side booked their spot at next year’s tournament, which will be played at 12 venues across Europe, after seven straight qualifying wins.

Russia appear set to take the second automatic slot from the group, after a 4-0 win over Scotland moved them eight points ahead of Cyprus.

Belgium will be one of the favourites as they look to lift a first major international title when the Euros get underway on June 12.

“In my eyes, nine countries have the talent to win the Euro,” added Martinez. “What will make the difference is how you face adversity. It’s necessary to sacrifice yourself for your teammates.”

Their victory at the King Badouin Stadium matched Belgium’s record winning margin of nine goals, having previously beaten Zambia and Gibraltar 9-0 in 1994 and 2017 respectively and hammered San Marino 10-1 in 2001.

“We could have scored more, so there is a little bit of disappointment about that 10th goal not falling,” said Belgian skipper Eden Hazard. “Now we have to go for 30 (points) from 30 in the group.”

Belgium were forced to wait until the 28th minute for the initial breakthrough on Thursday, which arrived when Leicester midfielder Youri Tielemans fed Lukaku, who fired home his landmark goal under San Marino goalkeeper Simone Benedettini.

England will walk off if racially abused: Abraham

The floodgates then opened, as Nacer Chadli slotted into the corner from the edge of the area three minutes later, and visiting defender Cristian Brolli scored a comical own goal 10 minutes before the interval as Benedettini pushed the ball against his knee and into the net.

Lukaku wasted little time in making it 51 Belgium goals with a low, right-footed effort, before Toby Alderweireld’s deflected strike and Tielemans’ drive made it six before half-time.

“Nine-nil is a good result but we would have loved to have scored one more and broken that all-time record,” said Inter Milan striker Lukaku.