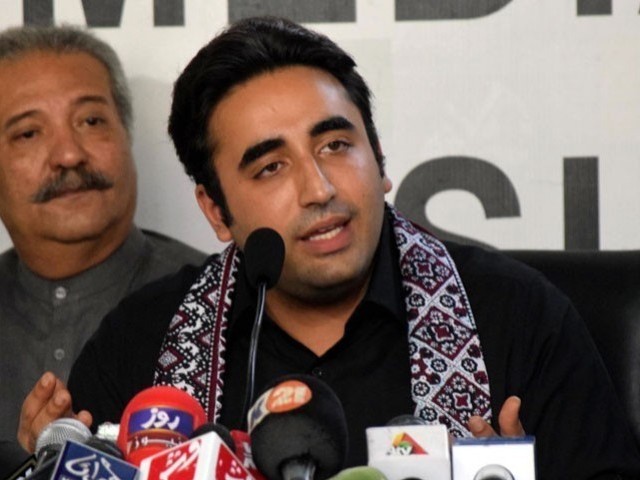 HYDERABAD: In a charged speech during a by-election campaign rally in Larkana on Saturday, Pakistan Peoples Party (PPP) Chairperson Bilawal Bhutto Zardari again called the ‘Sindh card’ into play as he sought votes for the October 17 by-polls. “Marsoon marsoon Sindh na desoon [I will die but not surrender Sindh],” he chanted while reiterating the federal government’s alleged plan of separating Karachi from Sindh.

“Karachi is Sindh’s capital. Karachi is the Kohinoor in Sindh’s crown. But the puppet government [of Pakistan Tehreek-e-Insaf (PTI)] and their allies and facilitators want to occupy your Karachi and separate it from Sindh,” he told the crowd whom he addressed from the sunroof of his vehicle on the City School road.

He further said, “They are mistaken if they think that by putting Sindh’s leadership in prison and by bringing it under pressure they can separate Karachi [from Sindh].”

The PPP chairperson asked the people whether they will allow the Centre to occupy Karachi.

“If you won’t, then give vote to arrow on October 17 [by-election in PS-11 constituency of the Sindh Assembly] and send a message to the Centre that marsoon marsoon Sindh na deson [I will die but not surrender Sindh].”

The Muttahida Qaumi Movement-Pakistan (MQM-P), an ally of the PTI government, tabled a bill in the National Assembly on October 1 seeking an amendment in the constitution to change the geographical boundaries of the provinces. The bill is in line with the party’s decade-old stance for creating a new province in Sindh. The PPP, in reaction to the bill, passed a resolution in the Sindh Assembly which condemned the MQM-P’s move and vowed to keep the province united.

The constituency is likely to witness one challenge between the PPP’s Jamil Soomro and Grand Democratic Alliance’s Moazzam Ali Khan Abbassi who is also being supported by the PTI. The seat fell vacant after the Supreme Court disqualified Abbassi, who was elected as MPA on the GDA’s ticket, for failing to declare his assets.

Abbassi reportedly own 140 acres of agricultural land but he had declared only 61 acres in the nomination forms which he filed for the 2018 general elections. The court on August 22 also directed Election Commission of Pakistan to hold the by-polls.

“Are you with the grandson of Zulfiqar Ali Bhutto [former PM and PPP chairman] and son of Benazir Bhutto [former PM and PPP chairperson] or with the enemies of Sindh?” Bilawal asked the people of Larkana which is considered a PPP stronghold and also houses the mausoleum of Bhuttos. He reminded them of their past support and loyalty for his mother and grandfather and sought the same for him while assuring that he will serve them the same was as Bhutto and Benazir.

Bilawal censured PM Imran Khan for backtracking on his promises of creating 10 million new jobs and constructing five million homes for the poor. He contended that on the contrary, Khan’s government has made millions of people redundant and shelterless due to regressive taxes and wide-ranging anti-encroachment operations across the country.

“The PTI doesn’t feel pain of the common people.” He reiterated that when the PPP formed the central government in 2008 it confronted a global recession, rampant terrorism and floods. Yet, he added, the economic policies of the party neither created redundancy nor made the people homeless, recalling that the PPP government increased salaries and pensions of the government employees by 100 to 175 per cent.

“We also signed an agreement with the International Monetary Fund and dealt with the global recession but we didn’t allow the impacts to affect the people.” He said only the PPP’s government is capable of steering the country out of financial straits, adding any other political party including Pakistan Muslim League-Nawaz lacked that capability.

He said the PTI government has burdened the farmers with taxes and inflation by withdrawing the agricultural subsidies and, simultaneously, the small and medium traders have been saddled with the regressive taxes. Bilawal asked the people to support the PPP to fight the puppet government of PTI.