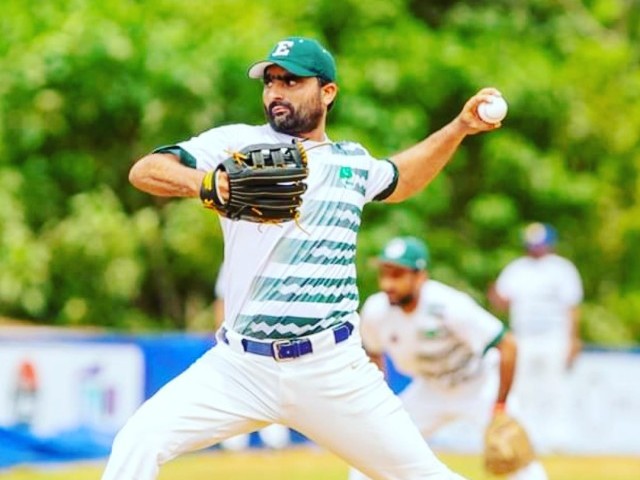 KARACHI: Baseball is mostly known to be a sister game of cricket, it may not be considered mainstream in Pakistan, but the fact is that it is making strides despite the odds. Pakistan will be competing at the 29th Asian Baseball Championship, also a qualifying round for the 2020 Tokyo Olympics, in Taipei City, Taiwan starting from October 14.

Pakistan had qualified for the championship after they finished as the finalists at the West Asia Cup in Sri Lanka, a performance that was stellar as it was, but went unnoticed by the government and the mainstream media.

Captain for the team in that tour and one of the most respected players Hafiz Muhammad Usman believes that as far as the passion is concerned Pakistani players have what it takes talent-wise but it is generally the lack of facilities and proper infrastructure that hinders the way to further their careers.

“We can qualify for the Olympics, of course, but it is not easy,” Usman, who belongs to Multan, and had initially wanted to be a cricketer, told The Express Tribune. “The players from other countries are not overcome by worries of how they will make through financially difficult times. They get proper facilities, they get the status, their quality of life is better. And it all adds up. It all makes a difference. Baseball is still a sport that is growing, at a pace that is not very fast, but it is in a better position from when I started in 2002.”

The left-handed pitcher believes that Pakistan can perform well in Taiwan, with eight teams competing for a spot in the final qualifying round for 2020 Olympics later.

So far Japan have already qualified for baseball in the Games.

In the Asian championship there are countries including Hong Kong, Philippines’, Pakistan, Sri Lanka, Chinese Taipei, Japan and South Korea.

Pakistan are ranked 24th in the World Baseball Softball Confederation list, an achievement for the players on its own, without having coaches from abroad or monetarily being as strong as others in Asia alone.

The 29-year-old Usman, who plays for Wapda domestically, was picked by now one of national coaches Basit Murtaza, when the former was studying at a madrasa. He used to play cricket, but his powerful throw had impressed Murtaza.

After that, Usman represented Pakistan for the first time in 2004 and went on to become an integral part of the national team in three Asian Games and four Senior Asian Championships.

“It has been a long career and although I’ve had opportunities to go abroad, I couldn’t. However, I want other players to be playing in foreign leagues too. I have played in Iraq in 2016, but it all comes down to how much resources we have and I feel the government could have really supported us, when we got medals at West Asia Cup as well. They could’ve supported the players monetarily, but they didn’t. We are just waiting for our time and still performing the best we can internationally,” said Usman.

“We’re ranked among the top teams in the world, top 25, but there is no support or funding. People give us respect, but it would be nice to at least see that our quality of life is better, but it is not. Compared to cricketers, people would want to see their children play cricket, instead of baseball, or any other sport.”

The team for the Asian Championship will be announced soon, but Usman is also looking forward to the National Games too, as his department will be a part of the program in Peshawar later this month.