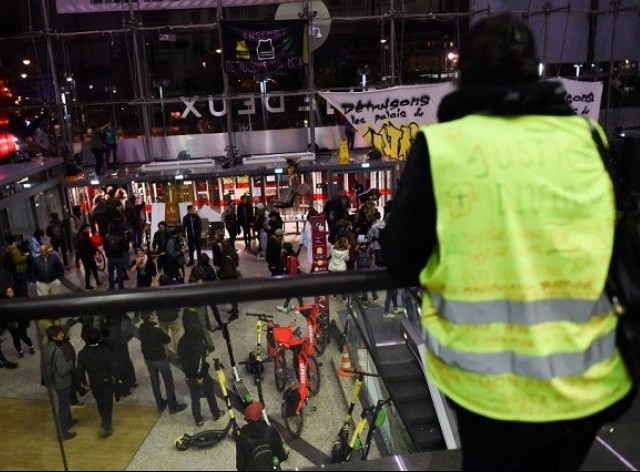 A yellow vest stands as protestors stay inside the Italie Deux shopping mall in Paris during a demonstration called by the Extinction Rebellion environmental activist movement. (Photo: AFP)

PARIS: Hundreds of climate activists barricaded themselves into a Paris shopping centre for hours ahead of a planned series of protests around the world by the Extinction Rebellion movement. 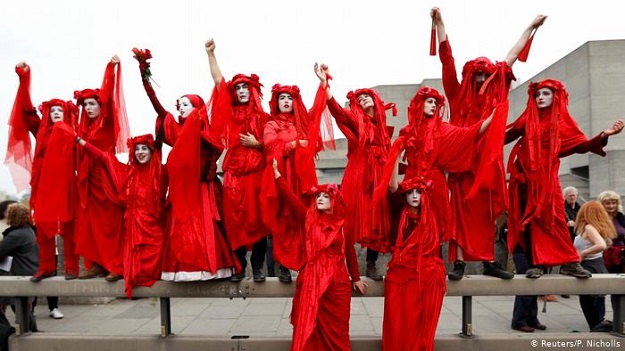 Extinction Rebellion, founded last year by academics in the United Kingdom, is one of the world’s fastest-growing environmental movements. Their aim is to protest climate change inaction in a creative and non-violent way. Demonstrators say people are causing their own mass extinction, which is the basis of their “rebellion.” (Photo: Reuters)

Campaigners faced off against police and some inconvenienced shoppers as they occupied part of the Italie 2 mall in southeast Paris all day on Saturday, staying put into the early hours of Sunday.

They unfurled banners with slogans like “Burn capitalism not petrol” above restaurants and the window displays of fashion boutiques.

The protest comes ahead of planned disruption to 60 cities around the world from Monday in a fortnight of civil disobedience, from Extinction Rebellion (XR), which is warning of an environmental “apocalypse”. 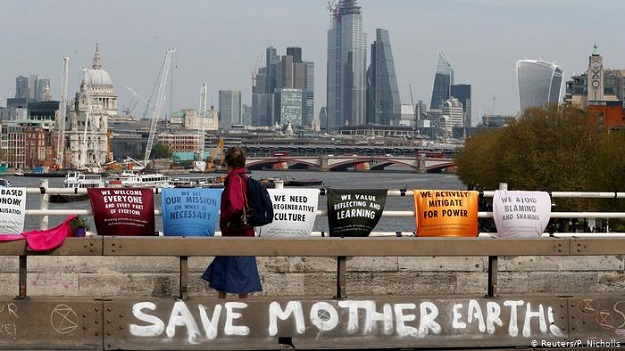 Beginning April 15, protesters with Extinction Rebellion took to the streets of London and other cities to demand governments declare a climate and ecological emergency. They occupied key spots in the city, calling on those in charge to reduce greenhouse gas emissions to zero by 2025, halt biodiversity loss and set up citizens’ assemblies on climate and ecological justice. (Photo: Reuters)

As the centre tried to close up on Saturday evening, security forces ordered the protesters to leave the area, activists told AFP.

According to images broadcast on social networks, police then tried to enter the building while protesters blocked entrances with tables and chairs.

“I am with XR to say stop this crazy system before it destroys everything,” one young woman told AFP, giving only her first name Lucie.

The demonstrators said they eventually chose to leave at around 4 am.

Other campaign groups also joined in with the Paris shopping centre demonstration, including some members of the “yellow vest” anti-government protest group. 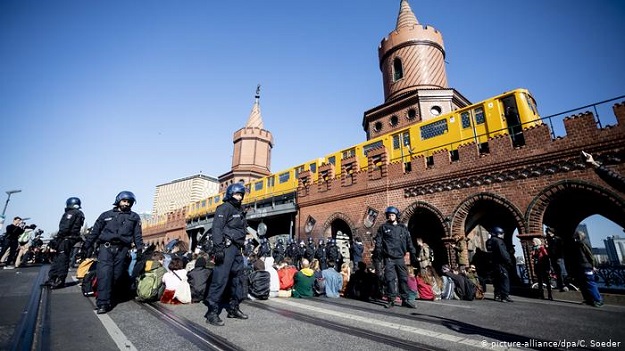 The Extinction Rebellion protests got their start in London, but the movement has also spread to other major cities around the world. On April 15, these activists on the Oberbaum Bridge in Berlin blocked traffic for hours. (Photo: Reuters)

Non-violent protests are chiefly planned by XR from Monday in Europe, North America, Australia, but events are also set to take place in India, Buenos Aires, Cape Town and Wellington.

Another protest was held in Berlin on Saturday, with campaigners setting up camp near the parliament building.

“To the governments of the world: we declared a climate and ecological emergency. You did not do enough. To everybody else: rebel,” XR said on its website ahead of its International Rebellion wave of activism. 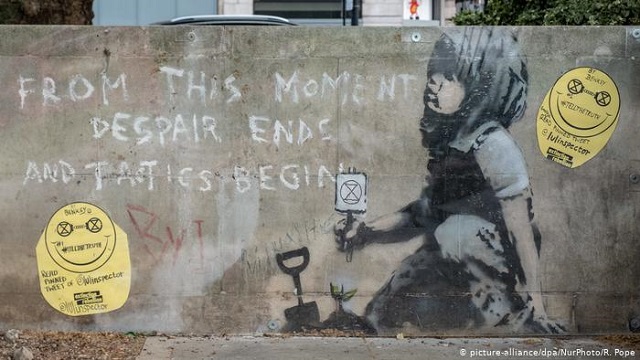 In April, the organizers in London said they were willing to switch tactics and talk with the government. “We’re giving them an opportunity now to come and speak to us. If they refuse … then this is going to continue and this going to escalate in different, diverse and very creative ways.” (Photo: Reuters)

“You can’t count on us or Greta to do this for you,” it said, referring to teenage Swedish climate activist Greta Thunberg. “Look inside yourself and rebel.”

Extinction Rebellion was established last year in Britain by academics and has become one of the world’s fastest-growing environmental movements.

Five things to know about Portugal