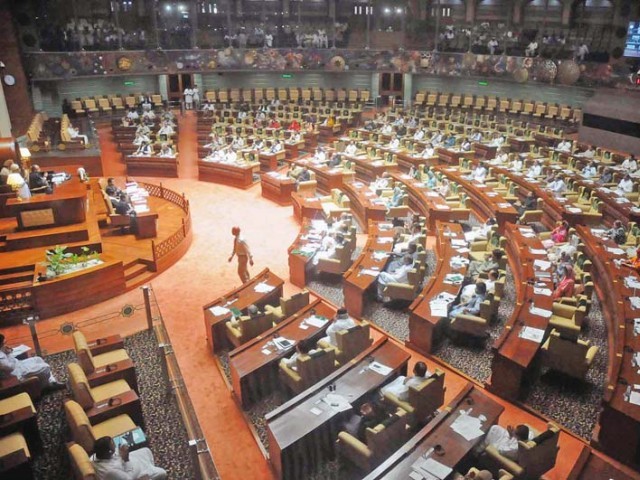 KARACHI: The Sindh Assembly unanimously adopted a resolution on Saturday, condemning the decision of Federal Urdu University of Arts, Science and Technology (FUUAST) to suspend admission in its department of Sindhi Language.

The resolution moved by Pakistan Peoples Party (PPP) MPA Heer Ismail Sohu and supported lawmakers from all parliamentary parties said, “This house condemns the decision made by Federal Urdu University administration, which is highly discriminatory and bears no constitution compliance. It is based upon the prejudiced ends that the university administration seeks to service. This house demands of the federal and provincial government to order immediate inquiry and restore the previous status of admission at the university.”

Debating on the resolution, the lawmakers said that a public university should avoid working on ethnic lines, which discourage the culture and language of indigenous people living in the country.

“Urdu is our national language, but there has been a Sindhi department in the university from where dozens of students get degrees. We wonder why the admission has been closed and applicants have been asked to not avail this option,” the lawmaker remarked.PPP’s Shamim Mumtaz was of the view that such decisions would promote ethnic division.

Referring to the financial constraints facing public universities, Muttahida Qaumi Movement-Pakistan (MQM-P) Javed Hanif said, “This might have happened due to lack of resources. I request the government to enhance the funds of public universities.”

Pakistan Tehreek-e-Insaf (PTI) MPA Jamal Siddiqui and Sardar Shah of PPP were among others who spoke on the resolution, which was passed unanimously.

The assembly also introduced the ‘Sindh Prohibition of Preparation, Manufacturing, Storage, Sale and Use of Gutka and Mainpuri Bill 2019’. However, it deferred discussion on adjournment motion pertaining to the deplorable condition of Pakistan Steel Mills and its employees due to absence of mover of the adjournment motion, Muttahida Majlis-e-Amal (MMA) MPA Abdul Rashid.

Raising the issue of the special powers of the Rangers, PTI MPA Arsalan Taj said that the paramilitary force has stopped its patrolling in various areas due to its powers, which have now been reduced. Refuting the PTI MPA’s claims, Information Minister Saeed Ghani said, “Rangers have the same policing powers and its personnel are still patrolling the city.” Ghani said that the police and Rangers have developed a strong working relation when it comes to maintaining the law and order situation. Later, the speaker adjourned the session till Monday.