Small kids take to the big screen in Lahore

Small kids take to the big screen in Lahore 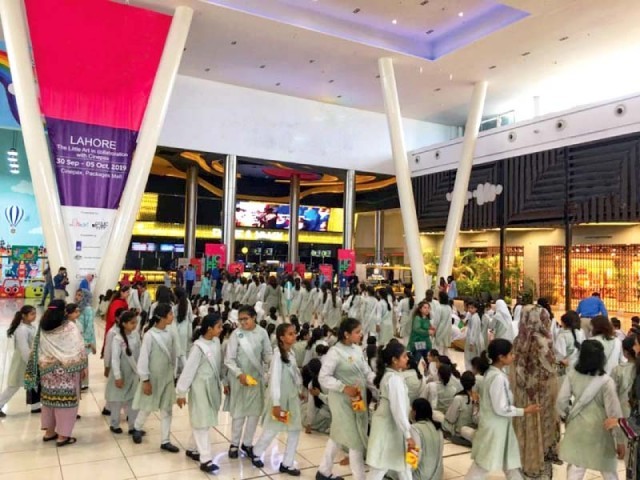 LAHORE: The 11th International Children’s Film Festival came to an end on Sunday (today) at a local cinema. This year, the festival will showcase 116 films selected from 27 countries, including those made by young Pakistani filmmakers.

The films shown at this festival have been selected out of 3,137 entries from 114 countries. Observers say the response has been overwhelming in terms receiving the best quality of work.

The festival, which continues for a week, features films made by children from around the world. The jury panel consists of Ali Ejaz, a renowned filmmaker and founding member of the Daco Monterey Association of Pakistan. There is also filmmaker and BNU Lahore lecturer Wajiha Rizvi and well-known novelist and poet Asghar Nadeem Iqbal.

Their aim is to find the best international entries for the festival in 2019. The event launched with The Little Art Team at a press briefing attended by young philanthropists and guests.

Salima Hashmi recalled that her journey with The Little Art Team and the Lahore International Children’s Film Festival began years ago. She said Shoaib Iqbal of The Little Art approached her. “After hearing his thoughts on the platform, I decided to join him. I feel that platforms like the Lahore International Children’s Film Festival have a very important role in building the character of the children, while daily content on TV is not helping in this regard.”

She continued that developing a platform like the Lahore International Children’s Film Festival is not an easy task, but it is worth the effort to build the future and role of children.

Jeevan Nadana Kumar expressed his gratitude and said he has been in Pakistan for the last nine months. He added that during this period, he had been in contact with the youth and school students throughout the country. The energy, courage and creative skills I have seen in the Pakistani youth has impressed me a lot. I appreciate the efforts of organizations like The Little Art on promoting such young talent.

“Since the establishment of The Little Art, we have been committed organising a Film Festival which can provide a platform for the youth to understand the world cultures through film and to celebrate creative expressions.”

Kumar said the since 2008, through the Lahore International Children’s Film Festival, more than 481,550 school kids and communities have succeeded in achieving the goal of showcasing the best in children’s cinema across the world. The outreach programmes of the festival include Faisalabad, Bhakkar, Gujranwala and Jamshoro.

Facilitation centre a heaven-sent for Muzaffargarh