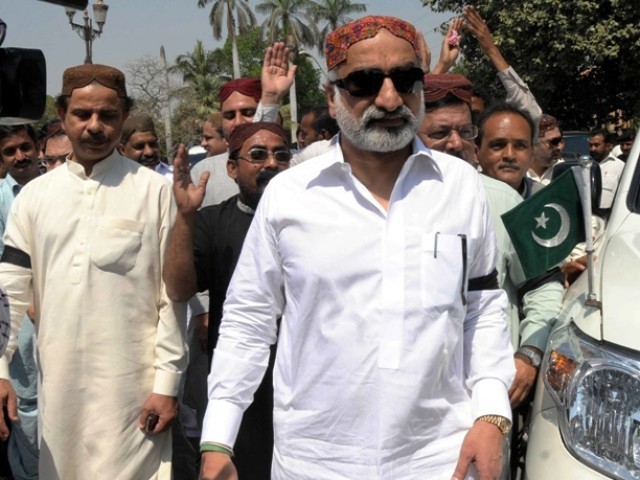 The Muttahida Qaumi Movement (MQM) and the ruling Pakistan Peoples Party (PPP) appear to be moving towards the political equivalent of a head-on collision, with the MQM accusing the PPP of colluding with its opponents and using strong-arm tactics.

The PPP for its part is seeking to shore up support for the pre-2001 local government system, but seems to be alienating members of its own party in the process.

The tensions come on the day that the Sindh government formally implemented the revival of the pre-2001 system.

In a late-night press conference, MQM leader Anis Qaimkhani accused the government of conspiring against the MQM by seeking an alliance with the breakaway Muhajir Qaumi Movement (known as MQM-Haqiqi). Qaimkhani blamed a joint conspiracy between the PPP and Haqiqi for the phones lines at MQM’s headquarters in Karachi being disconnected.

After an initial denial by Sindh Chief Minister Qaim Ali Shah, Federal Interior Minister Rehman Malik seemed to imply that the government had been involved in disconnecting those phone lines by ordering them  reconnected within an hour.

The MQM leader was referring to a meeting between Sindh Senior Minister Zulfiqar Mirza and the leader of Haqiqi, Afaq Ahmed. Mirza admitted to the meeting and said “If meeting Afaq Ahmad is a crime, then I will keep committing it.”

Qaimkhani, meanwhile, delivered a fiery speech at a hastily put-together press conference past 1 am on Monday morning, speaking angrily against the ruling PPP and President Asif Ali Zardari. His speech implied that there may be further violence in the city if the government continued policies that he felt were against the MQM.

“Don’t push us against the wall,” he said. “This is not 1992 or 1995.” The two years were a reference to particularly violent years in Karachi’s history when a clash between the MQM and the government, then backed by the military, led to thousands of deaths.

At an earlier press conference, MQM Deputy Convenor Farooq Sattar said that the party would begin a mass protest campaign to build support for an elected local government system.

Article 140A of the constitution mandates that provinces devolve some of their powers to “elected representatives of the local governments.”

The PPP leadership in Sindh, meanwhile, met with several opposition parties for a dinner at the house of Sindh Information Minister Sharjeel Memon in what appeared to be the beginnings of a very public coalition-building effort. The guest list at the dinner included leaders from the Awami National Party, the Pakistan Muslim League Functional and even the Jamaat-e-Islami.

The public nature of the dinner, and the invitations to journalists, suggested that the PPP may still be interested in a compromise with the MQM. The Sindh chief minister implied as much in his remarks at the occasion.

“If we wanted to get rid of the MQM, we need only accept their resignations,” he said, referring to the fact that the government has not yet accepted the resignations of the MQM members of the provincial cabinet.

Resistance from within PPP

Yet even as the PPP leadership seemed to be garnering support with other parties for what has now become known as the ‘commissionerate’ system, several legislators within the PPP caucus in the Sindh Assembly seem not to second the plan, particularly since it involves redrawing district borders.

Sindh Food Minister Nadir Magsi met with the chief minister on Sunday to express his concerns over the plan which would reunify Kamber Shahdadkot district into Larkana, which he feared may require his constituents to have to re-register their property and apply for new national identification cards.

Another PPP member of the Sindh Assembly, who wished to remain anonymous, said that he would also voice his opposition to the formation of two new districts of Hyderabad and Larkana divisions at the party meeting on Monday (today).

Confusion in the police force

Meanwhile, even as the government pressed ahead with the restoration of the 1861 Police Act, there is massive confusion within the Sindh Police as to how the changes will actually be implemented.

While many of the changes are cosmetic (such as a change in titles for most senior officers), several other require a complete reorganisation of the police force for which there appears to be no real plan.

The Karachi Police in particular seem very confused. Instead of being one unified city district police force, Karachi’s law enforcement will now be divided into the five districts that constitute Karachi division.

Yet the most consequential change will likely be the re-merger of the operations and investigations branches of the police. Officials themselves seem divided on the issue.

Members of the operations division say that citizens will now have to deal with only one person at a police station, making it convenient for them and offering fewer opportunities to the police force to extort bribes.

However, some members of the investigation wing said that the police force had just begun to acquire specialised knowledge in investigation which may now be lost as the two departments are merged again.

In addition, one official, who wished to remain anonymous, said that citizens would now be at the whims of just one police officer, the Station House Officer, who could single-handedly decide the fate of their complaint for or against them, without any recourse to alternative means of justice. The investigation wing, he said, served as a check on the operations wing, and vice versa.

(With additional reporting by Hafeez Tunio and Faraz Khan)