'Stop conspiring against MQM or there will be repercussions'

'Stop conspiring against MQM or there will be repercussions' 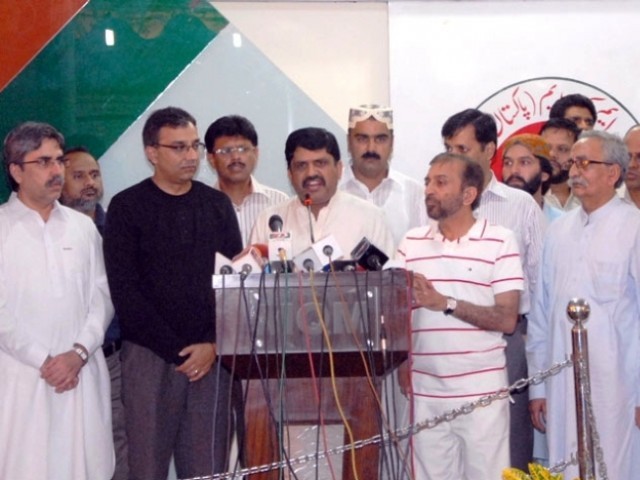 KARACHI: Anees Qaim Khani, Deputy Convener of the Muttahida Qaumi Movement (MQM) Coordination Committee lashed out at the Pakistan People’s Party (PPP), late on Sunday, urging them to stop hatching conspiracies against the MQM. He was addressing a press conference at MQM’s headquarters, Nine Zero.

In reaction to the telephone lines of Nine Zero being disconnected, MQM held an emergency conference at 1am today, wherein Anees Qaim Khani, flanked by other senior leaders such as Dr Farooq Sattar, Mustafa Kamal and recent MQM revert, Aamir Khan, addressed a large congregation of workers along with media personnel.

In a fiery address, he reiterated that Pakistan People’s Party (PPP) was conspiring against MQM for rejecting the Commisionerate system. He said that the PPP was conspiring an ‘operation’ against the MQM and had started by disconnecting the phones lines initially.

The MQM claimed that senior PPP leader and former Sindh Home Minister, Zulfiqar Mirza, had met up with MQM (Haqiqi) leader Afaq Ahmed in prison, on Saturday, to hatch a plan against them, using People’s Aman Committee members to attack them.

At this point, Qaim Khani acknowledged the media for uncovering this plot and reporting it which led the conspirators to go on the backfoot. He said that people should determine who was lying and who was speaking the truth, referring to Mirza admitting to having contacts with Afaq Ahmed while on the other hand PPP denied having any contacts with him.

Qaim Khani, maintaining a fiery tone, reminded PPP that it wasn’t 1992 and 2011, instead, warning them and President Zardari to refrain from conspiring against the MQM, since any misadventure against them would constitute as action against Sindh and Pakistan, in turn, hence instigating a reaction ‘beyond imagination’ from MQM.

Anees said that on one hand the Sindh government said that lines werent disconnected while on the other hand Federal Interior Minister, Rehman Malik said that they were resumed on his order to PTCL. He said that the party is no more the  ‘Mohajhir’ Qaumi Movement of 1992 and is now the  ‘Muttahida’ movement, reiterating that any plan against them  would be considered a plan to break Sindh apart from Pakistan. At this point, he referred to MQM as being ‘Sons of Sindh’ and not to pin them up against the wall or there will be serious repurcussions.

He appealed to the Chief Justice of Pakistan to take suo motu notice of tonight’s actions and uncover the conspiracy. Towards the end he strongly urged President Zardari to instruct his party workers and leaders to not conspire against MQM as well as stop using PAC members against them, instead sort out matters in the assemblies or else ‘out in the open’ if that is what the PPP eventually wanted.